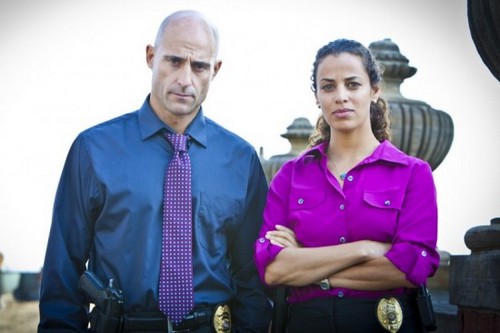 Tonight on AMC their new crime drama, LOW WINTER SUN debuts with it’s pilot episode.  On tonight’s show rising crime lord Damon Callis learns how far he will go to make a name for himself on the streets of Detroit.

The show is a gritty, edgy and provocative crime drama begins with an act of retribution – the murder of a dirty cop by a fellow Detroit detective, Frank Agnew (Strong). Seemingly the perfect crime, in reality the murder sets in motion forces that will forever alter the detective’s life and pull him into the heart of the Detroit underworld.

On tonight’s show when Detectives Frank Agnew and Joe Geddes murder a fellow cop, the Detroit Police Department launches an investigation that filters through more than just the homicide department. Rising crime lord Damon Callis learns how far he will go to make a name for himself on the streets of Detroit.

I am so excited for tonight’s premiere, it looks like it is going to be a great new show, which you won’t want to miss. So be sure to tune in for our live coverage of AMC’s Low Winter Sun Season Premiere — tonight at 9 PM EST! While you wait for our recap check out the sneak peek video below of tonight’s episode!