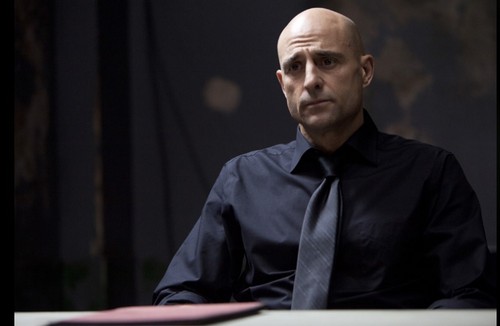 Tonight on AMC their new gritty, edgy and provocative crime drama, LOW WINTER SUN returns with their seventh episode called. “The Way Things Are”.  On tonight’s show Geddes and Frank have a confrontation.  Did you watch last week’s episode?  We did and we have a full and detailed recap here for you.

On last week’s show Agnew tracked Katia to Chicago, where she told him that he was just a customer to her and that her name was not Katia. A newspaper article stated Billy Hopson killed McCann. Believing Skelos was framing him for McCann’s murder, Damon told him about killing Billy and using his drugs to start his own business. He asked Skelos for protection and offered to pay double taxes. Skelos rejected the offer. Later, Skelos and Reverend Lowdown met Damon and his crew at The International to say that they were taking over all of Damon’s businesses.

On tonight’s show the DPD catches a break on the case; Damon and Maya’s freedom is in jeopardy; Geddes and Frank have a confrontation.

I am so excited for tonight’s sixth episode, it looks like it is going to be a great new show, which you won’t want to miss. So be sure to tune in for our live coverage of AMC’s Low Winter Sun Season 1 episode 7 — tonight at 10 PM EST! While you wait for our recap check out the sneak peek video below of tonight’s episode!

RECAP: Frank walks on over to his friend Shaun who is sleeping on the ground; Frank wakes Shaun up and hands him an egg sandwich. Shaun opens it and has pain in his teeth while eating; Frank hands him a drink as well. Shaun asks if Frank can stay but Frank says he’s going to be away for a while. Damon and Maya are in bed together and talk about moving to Florida; there’s a knock on the door and Maya rushes over; Frank is standing outside with the police with a warrant to search the house. Damon walks on over and Frank show them a picture of Billy; he’s bringing Damon in for questioning. The cops find cocaine and they take both Maya and Damon from the house and bring them downtown. Maya is asking for a lawyer but Joe says to focus on Damon because he’s the answer to everything, Frank says he will deal with Damon. He asks if Damon wants anything and then sits down for interrogation; he tells him he’s done this for a long time and people usually just want to tell him the truth. Right after they fall asleep, Frank tells him that they believe that he killed Billy; they have a lot of dirt on him to have him life. Damon says that he did nothing to Brendan and that he only wants him because Maya left his old friend Shaun; Frank then tells him that he should have seen Maya with him because she was better off. Frank takes Damon out of the room and into the bathroom; he starts beating the hell out of Damon. Joe comes out of the stall and the two take him into the stall; there is piss in the toilet and the shove his head into it. Dani and Charles hear what’s going on and ignore it; the keep putting his head in the toilet over and over again.

Frank and Joe are now questioning him together, they two of them keep putting the murder of Brendan and Billy on him but Damon keeps denying it. They say they have so much evidence of his DNA being in that room; it’s obvious he did it. Frank goes to sit with Maya; Frank tells her there’s nothing against her but Damon isn’t lucky. Frank says that his car was spotted outside the place Billy was killed; they have a secure tape of it all. Maya says she knows no details but a friend named Michael who has a habit and took off days ago; she thinks he could have done it. Joe calls the story bull shit and believes she’s trying to save Damon’s ass, Frank says they need the rest of the crew. Dani goes in to see one of Damon’s crew members who burnt his hand in the hot oil; she tells him to talk and everything goes well. Frank comes in and asks where Michael is; Damon says he’s free and can go where ever he wants. Joe gets a call and doesn’t look happy, Joe goes in to interrogate another crew member; he shows a picture of Michael and wants to know where he is. The guy asks why he’s here, Joe says one is custody and the other is missing; Frank mentions how Michael has a habit and took off. Damon says he did take off and believes it was him who did it, Dani is trying to figure out who killed Billy but the guy right away says that Damon didn’t do it but Michael killed him. Joe says he called Michael’s family and found nobody, the guy questions Michael doing it and then says that he did not do it; he says that Michael has never killed a person.

Frank says that Michael is a smoke screen; Charles says they need a confession out of Damon. Frank and Joe are told to solve the case today, they ask Damon how it might have happened with Michael killing Billy; they question about Brendan but says he heard nothing of it. Frank says they have witnesses that he was dealing cocaine and is sick of the lies, he takes Damon into the bathroom and says his lies don’t make sense at all. Frank tells him that Maya has one strike now or she will have to away for a very long time; but if she’s behind bars it will kill her. He brings Damon into the room again and says if he talks then Maya walks; he tells them that he wants to cut a deal. Joe jumps him and starts beating him up; he starts getting angry at him and shouts he killed his partner. Everyone is pissed at Joe for attacking him and Charles doesn’t want to see him for 2 weeks; they tell him to get out and Joe leaves. Dani says that she went back to ask someone about their statement and felt he was manipulate when speaking, Frank says it isn’t a big deal. Frank tells Dani they should talk about what happened; she tells him it’s fine and that they are adults. Dani then asks Frank if Joe might have been involved in Brendan’s murder because he’s lied to her.

Shaun is waiting outside of Maya’s bar and she asks him what’s wrong; he says his tooth is hurting like hell but at least he’s not using. He asks why she’s opening so late but she ignores him, he asks where Damon is but says he’s at the police all day. Shaun says to call Frank for help, Maya says he’s the asshole who brought the warrant. Maya pours a drink for the two of them and Shaun says it’s his job as a cop, he comments about them sitting together but she says it’s nothing special. Joe is at a hockey game and is talking to his daughter saying he’ll be home soon after one more stop, he meets with a man who has made deals with Damon a lot of times. Joe tells him that Damon would have talked about him and everything; Joe believes it’s only a matter of time till too much is said. Joe tells him Damon needs to disappear really fast or they could face prison this time; but he will not do it. Shaun compliments the bar looking good, Maya starts crying and Shaun takes her hand. He tells her it could be worse like being married with him still. Frank is driving in his car and sees a man on stilts walking around, the guy waves and Frank calls him an asshole. Dani is on the phone and Simon is at the door; she questions why he’s there but then says he knows about Joe being a bit off.

Joe is having a party for his daughter and she says hello to Frank; she leave but Frank asks for answers but doesn’t want to do it here. Joe and Frank move away from the house and get on a boat together.

Frank says to stop the boat when they are far out and Joe says they needed the privacy; Frank says they agreed that Damon was perfect to get the blame on him. Frank tells Joe that it’s close for Damon finding out about it all. Joe offers Frank a beer and he instead throws the cooler in the water and tells him to start talking. Joe then tells him that he needed help to kill his own partner because he is a weak man, he always take the easiest way out in everything and doesn’t care about honesty and integrity. Frank then tells him he sold his soul, Joe says that Brendan hated him. Frank then can’t believe all of Joe’s lies, Joe tells him that the house Brendan was buying because he started killing for people, Joe then says he made a deal with the devil and Brendan had to die. Joe even asks about how he slept with Dani; Frank then tells him that she thinks that he did kill Brendan. Joe then asks what Frank was doing in Chicago; Simon is talking to Dani and wonders if what Joe’s actions were deliberate. Simon tells her to protect her future and if she knows anything to tell him, she says that she believes Joe killed Brendan; Simon questions Frank but she is sure he’s clean. Joe then says he had a friend trace Frank’s cell; Frank said he looked but then says she is gone. Joe says she can bring them down and let her live once; Frank says she was innocent and worth saving but he can’t now. Frank says that they have to let the case go cold now, Joe tells him he needs a plan and says he’s going to take his kids to Canada or maybe the two of them have to die. Frank says Joe has to take him to shore; Joe tells him no and that they need to figure our what to do; Frank then says they are now taking on water after shooting the boat.

Joe is in church and sees a woman who’s really upset, his daughter sits beside him and he gives her the keys to the car. Damon meets up with Maya and Frank walks by them as the leave staring at each other. Joe goes into a confession and says he has sinned, he admits to lying, stealing, cheating and didn’t do right. He was a coward and that he became a cop; Simon brings up that Frank and Joe are probably the murderers of Brendan.