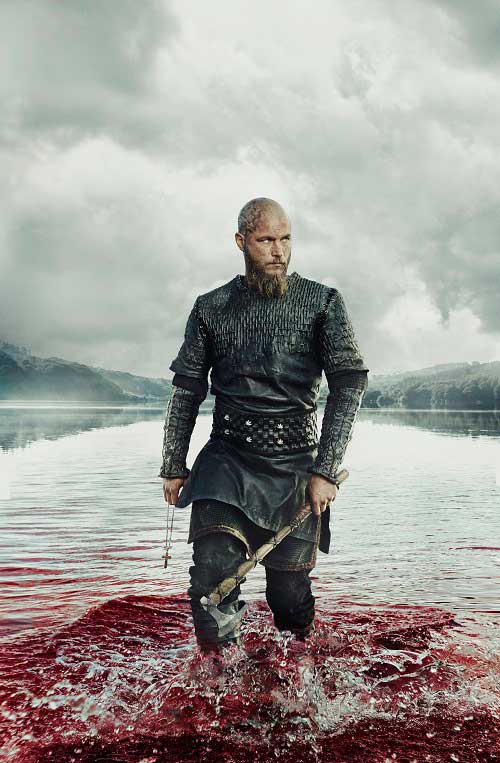 Vikings season 3 premieres on Thursday, 2/19, at 10pm ET on the History Channel. And let’s just say we’re super pumped up for the return of this show – and we’re sure you are as well! So what do you have to look forward to? According to Vikings spoilers circulating around the internet, the first episode, titled “Mercenary,” will place Ragnar’s new mission – invading the shores of Wessex – on center stage. Also during the upcoming installment, Ragnar and his faithful warriors will journey to the “mythical land of Paris,” which will provide the central storyline for much of this season. CLICK HERE for our recap of the Vikings  season 2 finale.

The full Vikings season 3 spoiler synopsis: “With the promise of new land from the English, Ragnar leads his people to an uncertain fate on the shores of Wessex…. Ever the restless wanderer, Ragnar is searching for something more, and he finds it in the mythical city of Paris. Rumored to be impenetrable to outside forces, Ragnar and his band of Norsemen must come together to break down its walls and cement the Vikings legend in history.”

If that doesn’t have your warrior blood pumping, well, then we’re not sure what will get you fired up. In celebration of the season 3 premiere, we’re hosting a fabulous giveaway, as well as telling you how you can interact with this hawt show on social media by raiding popular hashtags with Viking-related awesomeness!

So how can you participate in this epic raiding of popular hashtags while, at the same time, interacting with one of your favorite shows on TV? It’s simple. Sharpen those battle axes and practice ‘dem war cries because, come Monday, we’re going to unleash so much hashtag fury that Thor himself is gonna be cowering in the corner and crying for Odin. Read below for more details on how you can participate. Following that, be sure to enter the contest via our Rafflecopter for your chance to win an epic Vikings-themed prize pack valued at approximately $475!

In the meantime, as we wait for the raids to start, please consider entering the giveaway!

How to Enter: See rules laid forth by our Rafflecopter below.

Deadline: Please enter by Thursday, 11:59 PM EST (Note: We reserve the right to extend the contest should more entries be needed).

Disclaimer: Celeb Dirty Laundry has not received any payment as a result of this giveaway. The prize has been provided by a third party; however, this party is in no way sponsoring, nor are they administering, this post. All opinions expressed here are those solely of CDL. The Vikings Hashtag Raids, while promoted by CDL, is not an extension of or a campaign run by MLRP Media group. All opinions and media exchanged via this campaign do not belong to MLRP Media Group and should, therefore, be viewed as separate entities.