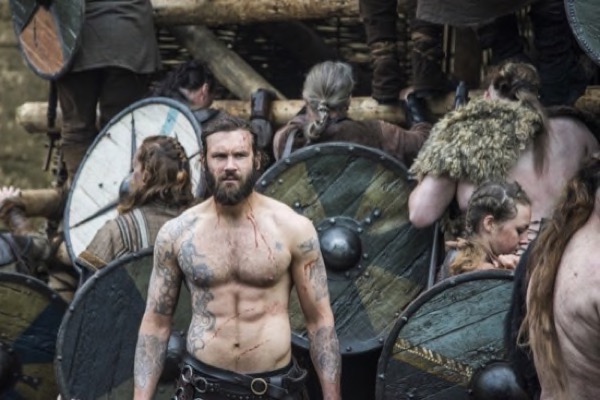 Tonight on the History Channel Vikings returns with an all new Thursday, April 9 season 3 episode 8 called “To the Gates!,” and we have your weekly recap below. On tonight’s episode, the Viking army attacks Paris

On the last episode, the populace of Paris was in a panic after the appearance of the Viking fleet, and Emperor Charles, at the behest of his daughter, announced he would remain in the city. Did you watch last week’s episode? If you missed the episode we have a full and detailed recap, right here for you.

On tonight’s episode as per say the History Channel synopsis “the Viking army attacks Paris as the city musters its forces for defense.”

Tonight’s episode looks like it is going to be great and you won’t want to miss it, so be sure to tune in for our live coverage of The History Channel “Vikings” at 10:00 PM EST! While you wait for our recap hit the comments and let us know how excited you are for the season 3 episode 8 of Vikings tonight.

Tonight’s episode of Vikings kicks off on the beaches of Paris – Ragnar and his men and women preparing for battle, Floki has completed the contraption that they will use to scale the city’s high walls. They fill their boats with weapons and secure the contraption that Floki built. Meanwhile, inside the walls of Paris the Count orders his men to take their positions and not allow any pass the walls. Women and children are scrambling through the city and taking cover.

Lagartha and her men arrive on foot at the front gate, meanwhile FLoki, Ragnar, and the rest of the men sail around and prepare to storm Paris from the back entrance. With their Shields Lagartha and her men move forward, they have brought a handmade tunnel to stand inside and protect them while they beat down the gates with a log. On the other side of the city, Ragnar, Floki and the rest of the tropps begin jumping out of their boats – and scaling the ladders that Floki built up the walls.

Lagartha and Rollo are not making out well at the front gate, the log is not working so they begin hammering spears in to doors – and still are not making much headway. At the ladders Ragnar is losing men left and right. Floki’s ladders offer no protection while the men scale them and the Parisians are picking them off with arrows while they are trying to get to the top of the wall.

A group of Ragnar’s men finally make it to the top of the wall and begin infiltrating Paris. The King’s daughter heads to the battle and hangs up a sacred flag, she screams at the soldiers to “fight for the death for Paris.” Inspired by her speech the Paris army seems to find their second wind and begins taking out Ragnar’s men. At the front gate, Lagartha’s men have the spears through the doors – they tie ropes to them and connect them to horses and begin trying to pull them off of the enormous gate, all while trying to avoid being shot with arrows.

Floki is running around like a mad man at the base of his ladders, and trying to avoid being hit by all of the falling bodies. The Parisians douse the ladders with buckets of oil and begin lighting them on fire – killing dozens of Ragnar’s men as he watches from the ship in dismay. Lagartha finally gets the gates open, and there are no soldiers on the other side, just a long empty hallway.

Lagartha and her men begin charging down the hallway and storming Paris they get to the end of the hallway and realize it is a trap. The army lowers a door and begins shooting harpoons through Lagartha’s army. Kolf realizes it is a trap and he punches Lagartha in the face and knocks her out and begins dragging her back out of the tunnel because she won’t retreat.

Bjorn gets fed up with the troops unsuccessfully climbing the ladders and begins scaling one himself – Ragnar chases after him. Floki is hiding underneath another burning ladder and chanting to himself, he blames Athelstan and curses him for doing this to him. He thinks Athelstan is having them all murdered from the grave. Ragnar and Bjorn finally make it to the top of the wall – after admirably trying to take all of the soldiers out himself Ragnar is flung off from the wall and lands in a heap on top of all of his dead men.

Ragnar climbs up out of the pile of dead bodies and stumbles over to Bjorn’s body – he has been shot with several arrows. Underneath the burning ladder, Floki is still shouting at the Gods. He screams that they betrayed him and are “pissing in his mouth.” He takes out a knife and prepares to slit his own throat – and then a body engulfed in flames falls on him. Inside Paris, they are celebrating their victory – and chanting “all hail to the emperor.”

Helga and the other women begin trying to patch up what is left of Ragnar’s men – he drags Bjorn’s lifeless body back to the camp. Lagertha and Rollo rush to his side and blame Ragnar for letting Bjorn climb the ladder up the wall – Ragnar snaps that he is a grown man and they need to stop treating him like a child. They get to work on Bjorn and try to save him – the woman informs Lagartha he might not live.

Floki is not dead, Helga finds him swimming ashore – he tells her that he has come to face the others. Helga hisses that he shouldn’t be there and shouts that he is selfish and all he cares about is himself before she storms off leaving him in the water. He screams at her not to leave him but she doesn’t look back. Later that night Kolf visits Lagertha in her tent, he whispers the he “desires her” and begins washing the blood off from her and kissing her. Lagertha stops him and snaps that she can’t forgive him for what he did, she will leave with him and be with him, but one day she will kill him.

Bjorn wakes up and cracks jokes at Ragnar when he sees him peeing blood next to his bed. Ragnar sits down with him and Bjorn explains that he climbed the ladder because his “instincts told him to.” He asks Ragnar what they are going to do now – he tells Bjorn he has to speak to an old friend about it. Ragnar wanders out in the woods and begins looking up at the sky and speaking to Athelstan. Ragnar laughs that he might have went too far with Floki, and he never intended to let him “really lead the men.” Ragnar coughs up blood and flops back on his bad, he announces that he is “bound and determined to conquer Paris.”