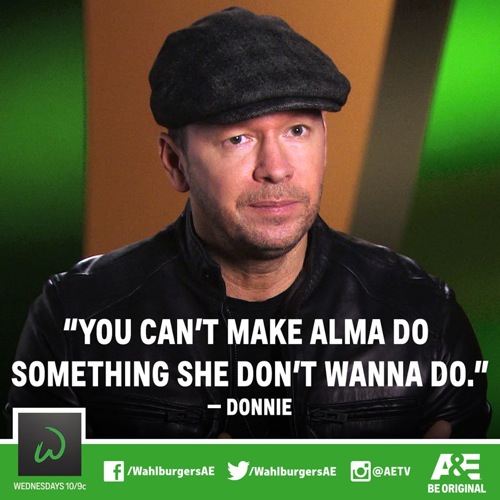 Wahlburgers airs tonight on A&E with an all new Wednesday January 14, season 3 episode 2 called “The Weight is Over” and we have your weekly recap below. On tonight’s episode, concerned for his friends’ health Mark Wahlburg challenges his assistant, Big A, and childhood friend, Nacho, to a weight loss competition.

On tonight’s episode as per the A&E synopsis, “concerned for his friends’ health Mark challenges his assistant, Big A, and childhood friend, Nacho, to a weight loss competition. Meanwhile, Paul decides to stay at Alma’s house while his is under construction and to his surprise, she has a second houseguest—his brother Donnie. The brothers soon realize it’s a good thing that they no longer live under the same roof.”

On #Wahlburgers, Paul says fitness is important to them. Mark says he always has to train to look the part. Donnie says it’s not so easy at his age. Alma says she works out too. Mark shows up to shoot Ted 2 and is with Nacho and Big A to do a weight loss challenge. He wants them to get healthier. Drama says Mark is a health nut and they even did a workout video back in 1993. We see a clip of the ridiculous thing. Mark is embarrassed about it.

Big A and Nacho do some trash talking. Johnny is going to train Nacho while Mark trains Big A. Alma comes to the restaurant to see Paul. He says he needs a place to stay while water pipes are fixed at his house and Deb and the kids are out of town. She insists he stay with her but he says he doesn’t want to impose. Alma says he has to and he gives up even though he’d rather stay at a hotel. Mark says Big A and Nacho are both very competitive.

They do a weigh in. Nacho is 300 and Big A is 251. They do some more trash talking. Mark says winner gets a billboard like he did for his underwear ads. At Alma’s, Paul says he doesn’t need a tour since he knows her house. He is exhausted and wants a quick nap before dinner service at the restaurant. She tells him he has to stay in the dog’s room because the other room is Donnie’s. He’s annoyed.

Paul says growing up in their house, nothing belonged to you – clothes, beds, everything. Donnie says sleeping with a Wahlburg may sound awesome, but it’s not. Alma calls the dogs his brothers and that aggravates Paul more. He gets on the bed for a nap but the dogs are all over him. He’s totally annoyed. He can’t nap and decides that’s enough. He goes into Donnie’s room and closes the door. We see more of the cheesy 90s workout video.

Mark says he has a strict routine he sticks to and says he made Big A starts at the wee hours of the morning. He wants him to lose at least 8 pounds that week. Drama finds Nacho eating a burger – actually a couple. He calls Mark to tell him he’s going to forfeit but Nacho says not to call him. He says it’s grass fed beef. Drama gives him a wheatgrass shake and says it’s the first day of a new life. He pops the lid and tastes it and says it tastes like shit.

Paul comes in and finds Donnie on the sofa. He asks why he’s there and Donnie says he’s saying there. Donnie says they can spend time with the dogs and each other. Donnie says maybe they can play some games. Donnie says he loves to stay over at his mom’s and loves that Paul will be there. He asks why Paul put his stuff in his room. Paul says growing up they had bunk beds and cribs. Donnie says it’s his room and he can’t be in it.

Paul says it’s a guest room. Donnie says the other rooms are guest rooms, but that’s his room. Paul says as adults, they all stake their claim as what’s theirs and the loudest one wins. Donnie says he has to wash the sheets and Paul says he’s not moving and it was his old room and Donnie never lived in the room. Paul leaves and Donnie goes to move Paul’s stuff to another room. Mark and Big A are at the gym sparring. Mark says he catches him sneaking bacon and all kinds of stuff.

He says he fluctuates in weight all the time and he wants to get him out of his rut. Mark has Big A doing rope snaps. Mark says it’s easier to stay in shape than get in shape, especially when you get older. He pushes him hard. He tells Big A that Nacho isn’t doing this. Drama has Nacho in the gym lifting weights. Mark says both guys are important to him and he wants them both to take better care of themselves.

Drama says Nacho is kicking ass then he heads home. Mark doesn’t let up on Big A. At Alma’s, the dogs are barking and Alma shushes them but Donnie says the dogs are trying to communicate. They’re playing cards when Paul comes in. He wants to go lie down but Donnie wants him to play. Paul says Donnie cheats and then says he’s going to bed. Donnie tells him he moved him to the other room. Paul is mad he touched his stuff and asks if he’s 12.

Donnie asks if that’s his room and his mom says it’s his. Paul says his mom asked him to come then moved him. Paul rants about having to move his stuff because Donnie showed up. Donnie says if he took Paul’s room, he’d expect him to move his stuff. Paul is unhappy he has to sleep with the dogs. He sneaks off to Donnie’s room and Donnie tells Alma he can’t let anyone sleep in the room and says there are private things there.

It’s time for the official weigh in of Nacho versus Big A. Big A gets on the scale and he’s at 243. That’s 7 and change lost. Drama has to give him props. Nacho was at 300 and now he weighs 302. Mark reminds him it’s a weight loss, not a weight gain challenge. Nacho says it’s muscle. Drama is in shock. Mark tells Big A he looks like a furburger and has to get waxed. Nacho is happy it’s not him getting waxed. They head to the waxing place. Mark is also making him work out up until the photo shoot.

Mark says to wax him from the knee up and says everything must go. They start with his upper chest and he’s in pain. Big A is dying. Mark says he thought it would be quick but says it’s like cutting down a 100 acre forest. Mark starts to help. He’s doing his stomach and then goes for his legs. Mark says they only got half the job done so he’s clean in the front and fuzzy in the back. Mark says they’re doing a billboard in Dorchester where they can see it since Times Square was too expensive.

Paul has a thank you gift for his mom for letting him stay. He says he knows it’s a pain especially with Donnie there. She says Donnie loves him. He tells her to taste one. She does and then he says it’s a dog treat. She hands them to the dogs and says it’s from their brother. Paul says the dogs are not his brother and sister. She tells him he’s her favorite but he says he won’t be staying with her any longer. Mark says Big A put on 12 pounds in five days and won’t be getting the billboard.