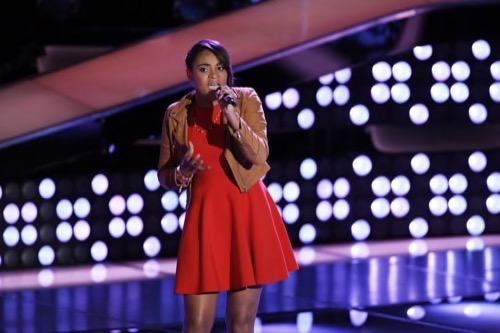 Koryn Hawthorne of Team Pharrell Williams sang, “Dream” by Aerosmith this week for her song choice.  On tonight’s show the top six artists performed live in front of coaches Adam Levine, Blake Shelton, Christina Aguilera and Pharrell Williams for America’s votes. Each of the Top 6 will have to give the performance of a lifetime to make it to the next round.

On tonight’s episode Koryn sang “Dream” by Aerosmith and this is what the judges said about his rendition:  Christina says it was an incredible rock performance and says she has to embrace what’s outside her boundaries and she did a great job. She says she was intense and electrifying and says Koryn really challenged herself. Pharrell says everyone should be inspired to dream harder after that performance. He calls it a brilliant choice to have the string section and says eveyrone should vote for her. – Voting numbers: 855-VOICE-03 or text 3 to 8642