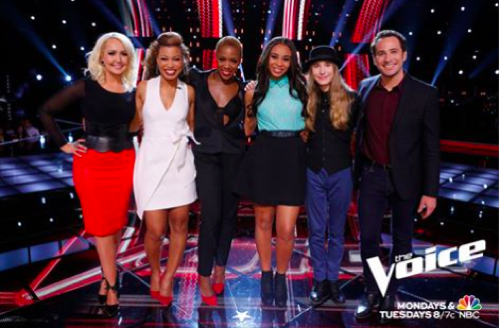 Tonight on NBC the Emmy award winning music competition The Voice returns with an all new Monday May 4, season 8 episode 21 called, “Live Top 6 Performances” and we have your weekly recap below. On tonight’s episode, the Top 6 artists perform.

On the last episode of The Voice, it was time for eliminations and we had to sadly see two artist were eliminated from the competition. A video of the contestants’ trip to an elementary school to help the students paint their school and perform for them live had also been shown. Did you watch the last episode? If you missed it, we have a full and detailed recap right here for you.

On tonight’s episode per the NBC synopsis “the top 6 artists perform live and will have to battle it out to get one of the coveted spots in the final four in front of coaches Adam Levine, Blake Shelton, Christina Aguilera and Pharrell Williams for America’s votes. Carson Daly (“TODAY Show”) hosts.”

Tonight’s Live season 8 episode 21 is going to be exciting. We’ll be blogging it right here for you. In the meantime hit up the comments section and tell us how excited you are for season 8 of The Voice.

#TheVoiceLive will feature two songs tonight for each singer – one standard and one dedicated to moms for Mother’s Day and the artists will get to have a visit from their mom or other loved one as they prepare.

Singer: India Carney
Song: Glory by John Legend and Common
Comments: Pharrell congratulates her and says he hopes Babyface Edmonds is watching so he can write her a song for an upcoming week. Adam says the song choice was good and says she stepped up and he’s proud of her. Blake says the true test was she did a great song that he didn’t know. Christina says she was remarkable how she converted the rap to lyrical song. She says what India did was super hard and she was awesome.
Voting numbers: 855-VOICE-01 or text 1 to 8642

Singer: Joshua Davis
Song: Desire by U2
Comments: Pharrell says this was even better than his last performance which he thought was his best and says he was doing something different and looked like he was having fun. He says the production was great too and says it was great for him. Adam says he’s most impressed by Joshua who got up there and showed a lot of comfort level and fun. He says he’s just making great music and having the time of his life. He tells America to keep Joshua.
Voting numbers: 855-VOICE-02 or text 2 to 8642

Singer: Koryn Hawthorne
Song: Everybody Hurts by R.E.M.
Comments: Blake says she always sings well and says she’s either the world’s greatest actor or is so invested in the songs and says she’s fun to watch. He asks how it’s possible that her mom looks 19. Pharrell says every time he watches her sing, he’s humbled that he got to steal her for his team. He says she lets the ego go to the side and lets the spirit come through. He says she lights up the room and calls her anointed. He calls her an inspirational singer.
Voting numbers: 855-VOICE-03 or text 3 to 8642

Singer: Kimberly Nichole
Song: Free Falling by Tom Petty
Comments: Adam says song choice is crucial and says she can sing anything so it doesn’t matter. He says he never would have imagined her doing a Tom Petty song and says she made it her own. Christina says Kimberly made her mom proud and says she knows she gets her voice from her mom and says it embodied freedom and joy. She says she thinks about this song with the radio all the way up and singing and says that’s how she sang it.
Voting numbers: 855-VOICE-04 or text 4 to 8642

Singer: Kimberly Nichole
Song: Free Falling by Tom Petty
Comments: Adam says song choice is crucial and says she can sing anything so it doesn’t matter. He says he never would have imagined her doing a Tom Petty song and says she made it her own. Christina says Kimberly made her mom proud and says she knows she gets her voice from her mom and says it embodied freedom and joy. She says she thinks about this song with the radio all the way up and singing and says that’s how she sang it.
Voting numbers: 855-VOICE-04 or text 4 to 8642

Singer: Meghan Linsey
Song: Steamroller by James Taylor
Comments: Christina says that was crazy and wow. She says she laid her out and soul out on the stage and says it was crazy great. She says Blake should be so proud of her and she did a fantastic job. Pharrell says he loved that and says it intrigues him that she’s from Nashville but wants to sing soul. He says she proves where pushing for what she wants will get her. Blake says woo! He says he’s so excited and says she sang the crap out of it. He says it was ketchup packet that she stepped on and spewed on their faces. Adam tells him to stop talking and Pharrell says everyone in Nashville needs to vote for her now.
Voting numbers: 855-VOICE-05 or text 5 to 8642

Singer: Sawyer Fredericks
Song: Shine On by Daisy Mae Erlewine
Comments: Adam says he’s a special kid and says he’s always amazing and that was one of his favorite performances of the night because it was engaging and emotional and says he’s unbelievable. Blake says Adam is right and says a lot of artists come through there and do a lot, but it’s hard to put into words what Sawyer does which is simple and real. He says dang it. Pharrell says no one can deny the power he has and what he does. He says it’s undeniable what he has and how he inspires people and says everyone should vote for him.
Voting numbers: 855-VOICE-06 or text 6 to 8642

Singer: Kimberly Nichole  [VIDEO HERE]
Song: Dirty Diana by Michael Jackson
Comments: Pharrell says she just had her first official rock and roll moment in front of millions of people. He says she rocked out and that’s clearly her destiny. Christina says she knows it’s always going to be electrifying when Kimberly comes out and says she’s incredible and embodies how to perform and says she can’t say enough. She says she’s truly a rock star.
Voting numbers: 855-VOICE-04 or text 4 to 8642

Singer: Joshua Davis [VIDEO HERE]
Song: In My Life by The Beatles
Comments: Blake says this song means something to everybody and says to everyone in the audience. Blake says the audience had no rhythm when they clapped and Adam loudly agrees. Blake says he wishes he could do what Joshua did and says it takes a lot of confidence and says he’s great. Adam says to stop the bad clapping and says it upset his soul. Then he says Joshua is a class act and that performance was mesmerizing every second. He says the vibe, playing and singing were flawless and begs America to keep him in it.
Voting numbers: 855-VOICE-02 or text 2 to 8642

Singer: Koryn Hawthorne [VIDEO HERE]
Song: Dream On by Aerosmith
Comments: Christina says it was an incredible rock performance and says she has to embrace what’s outside her boundaries and she did a great job. She says she was intense and electrifying and says Koryn really challenged herself. Pharrell says everyone should be inspired to dream harder after that performance. He calls it a brilliant choice to have the string section and says eveyrone should vote for her.
Voting numbers: 855-VOICE-03 or text 3 to 8642

Singer: India Carney [VIDEO HERE]
Song: Lay Me Down by Sam Smith
Comments: Adam says that was her best performance ever on the show. He says he’s impressed with everything about it but also that she did something different that worked. He says she’s a frontrunner. Christina says she killed it and she loves what she does every week and says she liked to see her stepping out of her comfort zone. She says she showed more grittiness and loved to see her get down. She says Adam is right about how she’s one of the frontrunners and thanks her.
Voting numbers: 855-VOICE-01 or text 1 to 8642

Singer: Sawyer Fredericks  [VIDEO HERE]
Song: Take Me to the River by Al Green
Comments: Blake says he always sings well and says he stands perfectly still but he never noticed until he had 100 dancers around him. He says all Sawyer has to do is stand there and sing and it doesn’t matter. Pharrell says he was surprised when he wanted to do the version and says he sees why he wanted to do The Commitments version. He says they’re used to him with the guitar but says he worked the stage and the ladies all cheer. Pharrell says everyone needs to please vote for Sawyer and says it feels right.
Voting numbers: 855-VOICE-06 or text 6 to 8642

Singer: Meghan Linsey [VIDEO HERE]
Song: Amazing Grace by John Newton
Comments: Christina says Blake may have just won the whole thing again and says it was gorgeous, touching and moving. She says beautiful job. Blake says he feels like when she sang it, the whole world stopped for just a second to listen to that. He says there’s a new sheriff in town and congratulates her. He says he’s so proud of her.
Voting numbers: 855-VOICE-05 or text 5 to 8642