Who Got Voted Off Dancing With The Stars Tonight – Alexa PenaVega and Mark Ballas Eliminated? 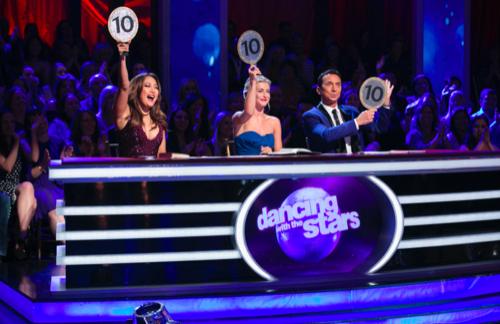 Tonight on ABC it’s another Dancing With The Stars elimination of Season 21 and we will say goodbye to another star. On tonight’s performance episode an elimination occurs after the ninth week of performances, featuring dances the stars have not yet performed. Later, the couples pair up for team dances inspired by live productions such as Broadway’s “Chicago,” with each dance showcasing two couples dancing side-by-side.

After last week’s performances, Nick Carter and his partner Sharna Burgess dancing Contemporary paying tribute to his wife Lauren Carter scoring 30/30 were at the top of the leader board. At the bottom, Andy Grammer and his partner Allison Holker dancing the Viennese Waltz paying tribute to Stevie Wonder scoring 22/30.  At the end of the episode Andy was sent home.  Did you miss the episode?  If you did we have a full and detailed recap, right here.  Did you miss any of last week’s videos?  If you did we have you covered, RIGHT HERE!

On tonight’s episode, “this week the six remaining “Dancing with the Stars” couples perform two show-stopping dances. For the first routine, the couples will reveal a dance style not yet performed this season. Later in the show, they will be moved into teams to perform a side-by-side dance. Inspiration for the team routines were drawn from each teams’ travels around the country to experience live productions of famous shows such as The Beatles™ LOVE™ by Cirque du Soleil®, Broadway’s Chicago and Royal Caribbean’s “We Will Rock You.” At the end of the night, one couple will be eliminated.”

Who do you think will be going home tonight? Sound off in the comments below and let us know your thoughts on who will be eliminated next!