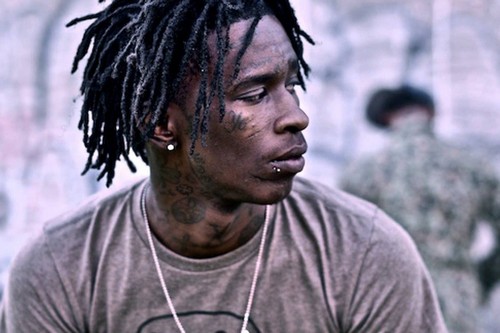 A brand new rap feud erupted when Young Thug couldn’t stand hearing a compliment that went out to Future on social media and decided to slam Ciara’s ex by comparing himself and Future by saying, “A n*** music couldn’t ever sound nowhere near mines…. ((IM MICHEAL)) he’s ((TITO)).”

The insults didn’t stop there either. During Young Thug’s obviously angry Twitter rang, he called out Metro Boomin, the original source of his irritation. Metro must have really hit a nerve on Monday when he tweeted, “Everyday I wake up, new mixtapes are falling out of the sky.. I think we all know where the trend came from lol” along with a picture of Future.

After Young Thug absurdly compared himself to Michael Jackson, he suggested that Metro Boomin might have a bit of an addiction problem. Young Thug tweeted, “I think if you guys were to stop drinking so much cheap liquor and high-tech syrup you would be able to think before speaking and typing.”

That high-tech syrup Young Thug is referring to would be “sizzurp,” a mixture of prescription codeine and promethazine mixed with Sprite or some other soda. Sizzurp is common with hip hop artists and is often drunk out of a doubled red plastic couple. Metro has no known struggle with the addictive drink and as far as we know, Young Thug was just trying to throw insults at the producer.

Metro Boomin was quick to point out that Future wasn’t the first rapper to release a lot of great mixtapes. Just that the “Commas” rapper has been pretty successful with that route to release his music.
Apparently Young Thug saw the comments that Metro Boomin had made about Future and felt like he deserved more credit instead.

Thug even admitted that he loves Future’s music. Young Thug said it makes him “happy.” Despite referring to Future as “Tito,” the “Off-set” rapper made it clear that he wasn’t gunning for Future and wasn’t looking for a fight.

Future did respond but it was short and sweet. He tweeted, “U will never have the juice like dat…” As far as Metro Boomin and Young Thug, they are still arguing about who releases better mixtapes. Thug feels like he was subtweeted and that Metro Boomin was only giving the shout out to Future because they work together.

Boomin has already responded and tried to end the beef by tweeting, “You gotta be crazy if you think I subtweeted Thug. That’s corny. People are allowed to believe what they want though. True or not.”

Is there a rap beef brewing somewhere between Future, Young Thug and Metro Boomin? Young Thug has a history of taking his beefs to the extreme. As he allegedly did in the constant battle with Lil Wayne that bought him an investigation after Wayne’s tour bus got shot up. Will Young Thug be able to let the mixtape diss go?