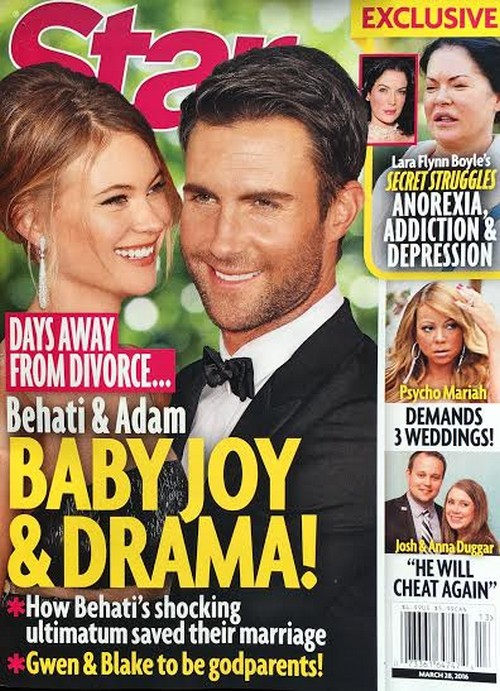 The Voice coach Adam Levine and his wife Behati Prinsloo abrely escaped divorce by getting pregant according to a shocking new report. The couple just revealed that they are pregnant with baby number one.

Adam should be on cloud nine right now, but according to this week’s cover of Star Magazine, the Maroon 5 front man’s marriage was in serious trouble and he and his wife were just days away from a divorce!

This week’s cover of Star Magazine features a photo of Adam Levine and Behati Prinsloo posing for the cameras. The headline reads, “Days Away From Divorce: Behati & Adam Baby Joy And Drama!” The cover goes on to tease, “How Behati’s shocking ultimatum save their marriage.”

Apparently, Behati Prinsloo has had baby fever since the day that she and Adam said their “I Do’s” and The Voice coach has been promising her a baby forever. According to one of the tabloid’s inside sources, Adam was not making good on his baby promise, and Behati was not having it.

The insider revealed, “When they got engaged, Adam promised Behati they would star trying right away, no questions asked.

But he kept dragging his heels about having kids and always came up with an excuse to postpone it.”
Behati reportedly gave Adam Levine an ultimatum – she wanted a baby ASAP, or else she was going to file for divorce.

So, The Voice coach really had no choice but to agree to a planned pregnancy, or else he was going to get hit with an unplanned divorce.

Star Magazine goes on to reveal that The Voice star’s co-workers Gwen Stefani and Blake Shelton have agreed to be the baby’s godparents – which is super cute, but we’re not totally buying it.

Blake Shelton and Adam Levine aren’t exactly BFF’s, and it’s no secret that the two musicians don’t usually see eye to eye on The Voice. But, hey maybe Gwen Stefani has turned Blake Shelton in to godfather material.

Our good pals at Gossip Cop claim this Star story is false – they also took a nice pic of the Star cover which we are borrowing.

So, are you shocked by the news that Behati Prinsloo and Adam Levene were just days away from a divorce before she got pregnant? Do you believe it? Will Adam resent his wife later on for forcing him to have a baby? Come back to CDL for all The Voice spoilers, recaps and news!