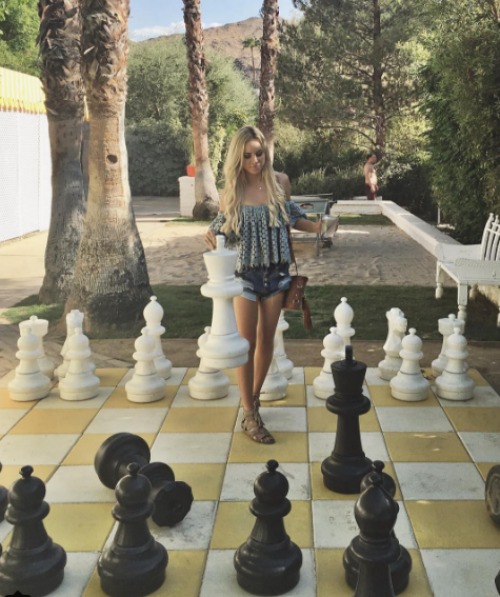 It was not too long ago that Josh Murray proclaimed his love for Andi Dorfman by proposing to her on the season finale of the Bachelorette back in 2014. Andi Dorfman and Josh Murray’s engagement lasted six short months before the brunette beauty pulled the plug on their relationship.

Andi Dorfman later went on to allege that Josh Murray was verbally abuse towards her during their engagement in her tell-all book, “It’s Not O.K.” And now Josh Murray’s new girlfriend Amanda Stanton is defending her man, suggesting that the claims are not true and that anyone who thinks otherwise is simply ‘jealous.’

“He hasn’t been controlling. He’s definitely not abusive,” Amanda Stanton told Us Weekly. “We’re on a show where everyone is dating each other, so I think a little bit of jealousy is almost cute and flattering. Everyone’s a little bit jealous. I think that’s normal and natural, especially in the early stages of a relationship, but nothing crazy or out of the ordinary.”

Of course, no one really knows what went on between Andi Dorfman and Josh Murray while they lived together in Atlanta, Georgia for six months back in 2014. Andi Dorfman’s wedding plans were in full swing back then while Josh Murray told the media multiple times that he wanted to start a family with his reality television star fiancé.

Fast-forward to the present and Josh Murray is doing the exact same thing with Amanda Stanton. The former college baseball players packed his bags and moved to California to live with Amanda Stanton and her two daughters while already hinting that he is planning to propose to his new girlfriend.

Andi Dorfman, meanwhile, has made no comments about Josh Murray and Amanda Stanton’s relationship. While Josh Murray’s appearance on ‘Bachelor in Paradise’ has helped revive his television career, Andi Dorfman tell-all book though failed to make an impact on the bookshelves. What’s worse, Andi Dorfman has failed to find any stable work since appearing twice on both the ‘Bachelor’ and the ‘Bachelorette’ back in 2014.

Either Amanda Stanton’s jealousy claims are true or Andi Dorfman has realized that it’s time to put her television career aspirations and failed celebrity relationships behind her. What do you think, CDL fans? Come to CDL for all your Bachelor in Paradise recaps, spoilers and updates!