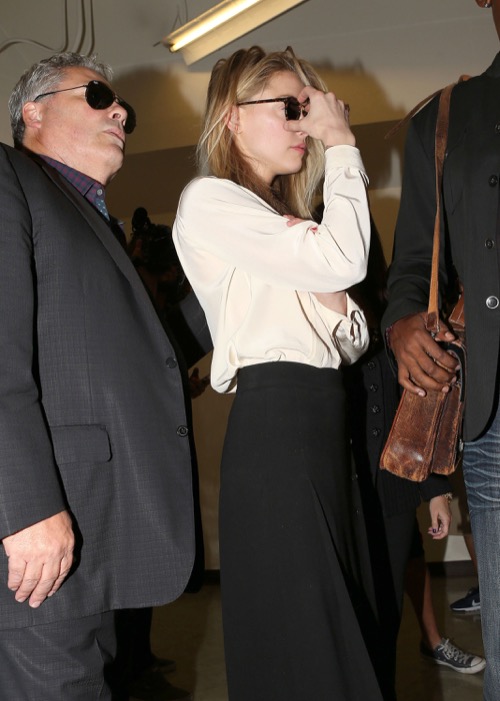 Amber Heard showed up almost two hours late and stayed for nine hours without ever setting foot inside the deposition room.

In addition to refusing to enter the deposition room, she also refused to submit supporting documentation necessary to the deposition.

In recent court documents, Johnny Depp’s legal team detail their repeated attempts to persuade Amber Heard to give her deposition as well as her refusal to turn over requested documents and her practically psychotic breakdown outside the deposition room.  Johnny Depp’s lawyers are now asking for a judicial order prohibiting Amber Heard’s testimony at the trial or a complete dismissal of her case against Johnny Depp.

The news comes on the heels of another TMZ report that Amber Heard has proof that she sought medical treatment in the past due to physical assaults against her by Johnny Depp.

Amber Heard alleges that she has a photo from 2014 that shows her holding a pill bottle that she alleges was prescribed in relation to physical abuse by Depp as well as medical records for treatment for domestic violence related injuries.

Heard is planning on calling seven witnesses to testify about the alleged abuse, while Depp has 23 names on his witness list.

The domestic violence lawsuit stems from Depp and Heard’s 15-month marriage.  In May of this year, the actress filed for a temporary restraining order against Depp, citing a violent incident during which the actor allegedly hit her with a cell phone, pulled her hair and grabbed her face, among other claims.

Since then, the estranged couple have been embroiled in a very public “he said, she said” feud that sources close to Depp claim is all a charade by Heard in an attempt to get her hands on Depp’s millions.

If Amber Heard wants to have a shot at winning her domestic violence lawsuit against Johnny Depp, refusing to give her deposition was a strange way to go about it.  In addition to strengthening the belief that she may be a bit unhinged, now Amber Heard risks the entire lawsuit being thrown out, wasting many thousands of dollars in legal fees.

Do you think Amber Heard’s case against Johnny Depp will be thrown out?  What do you think caused her meltdown?  Pitch your theories below.

Amber Heard is seen arriving for her deposition for her Johnny Depp divorce/domestic violence case at the court house in Century City, California on August 6, 2016. Amber was an hour and a half late for the deposition and her lawyer Samantha Spector could be seen waiting patiently for her to arrive. Once she arrived Amber did her best to try to hide her face from the photographers. FameFlynet