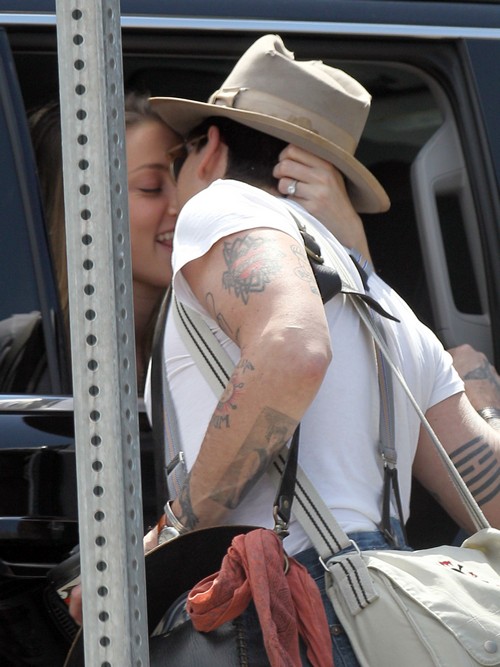 When news broke last week of Johnny Depp and Amber Heard’s divorce, fans of the Pirates Of The Caribbean star were shocked by the allegations his wife made against him – and the photos of her bruised face that quickly started making their rounds on the Internet.

Amber Heard petitioned for a restraining order and announced in court that Johnny Depp had smashed his iPhone on her face. The bruises were horrendous, but as more details start to roll in, it looks like there might be something fishy going on.

According to a new report from TMZ, police were called to the Depp household the night that Johnny allegedly assaulted Amber Heard. The police report, or rather of lack of one, in which Heard told the cops everything was fine and she and her husband had just “had an argument.”

Here’s where it gets a little fishy, and fans are now questioning whether or not Amber is telling the whole truth. According to TMZ, “When cops responded to the 911 call last week, they saw no evidence of injury. Our law enforcement sources say that not only was Amber’s face free of bruises, she never even hinted Johnny laid a finger on her.” The insiders at the police station went on to dish that they determined no crime had been committed and left the house.

Even stranger and raising more eyebrows, the night after Amber was allegedly assaulted by Johnny, she was photographed out partying with her friends without a care in the world, and did not appear to be the scared and battered woman that she was when she showed up in court.

Obviously, the only two people that will ever know exactly what happened are Johnny Depp and Amber Heard. But, Johnny is maintaining his innocence, and there are definitely some red flags popping up indicating that he may be telling the truth.

What do you guys think? Did Johnny really assault Amber Heard with his phone? Or is something fishy going on? Share your thoughts in the comments below!