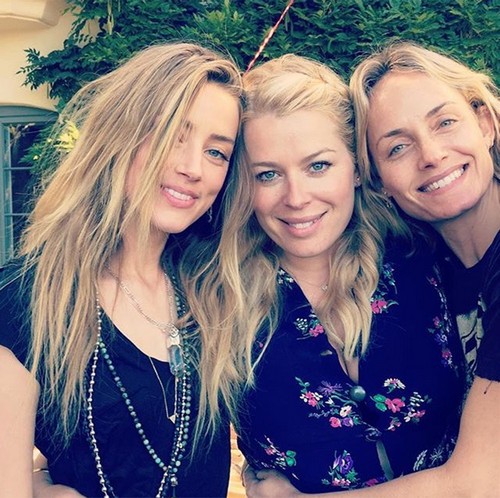 The court awarded Amber Heard a temporary restraining order against A-list actor and musician, Johnny Depp on Friday. Heard filed for divorce on May 25 and filed a motion for the actor to pay spousal support to her. Amber Heard claims that Johnny Depp physically abused her “on several occasions” and “left her fearing for her safety.”

The news about their breakup and the alleged abuse seems come from left field. Amber and Johnny seemed happy, and no one suspected that Amber supposedly was living in “fear for her life.” Depp responded to her divorce filing and begged the court not to grant Heard spousal support and noted that the “Magic Mike XXL” actress should pay for her own legal representation. It doesn’t appear the couple has a prenuptial agreement.

What makes the divorce announcement particularly shocking is Johnny Depp’s mother passed away a week ago. Amber filed for divorce and spousal support two days after his mother’s death. His mother’s death hit Johnny hard as he was extremely close to her.

Johnny’s attorney spoke out for Depp about the legal proceedings, “Given the brevity of this marriage and the most recent and tragic loss of his mother; Johnny will not respond to any of the salacious false stories, gossip, misinformation, and lies about his personal life. Hopefully, the dissolution of this short marriage will be resolved quickly.”

On Friday, TMZ obtained documents showing that Amber filed for a temporary restraining order against Depp because she was scared that Johnny would retaliate against her for speaking out about “the abuse she’s suffered.” When the LAPD arrived at their shared residence on Saturday, they found “no signs of a crime committed.” Amber refused to press assault charges against him.

Sources for Amber Heard claim that Johnny became upset with Amber and accused her of “untrue things.” He allegedly became angry with her and started throwing things in the condo. Amber claims he threw his iPhone at her face, which left a massive bruise on her eye.

Amber was seen with her friends in an instagram photo (since deleted) Friday night, smiling and dancing after obtaining her restraining order and claiming she feared for her life. She seemed unscathed by the legal battle ahead of her and appeared to want to let loose and have fun with her girlfriends. Johnny Depp did not appear in court this week, he was with his band, The Hollywood Vampires in Rio for the Rock In Rio festival.

The abuse claims have not stopped Johnny’s fans from supporting him. They rally around him and have taken to social media to send him love and support. According to TMZ, Johnny’s ex-wife, Lori Anne Allsion, doesn’t believe Amber Heard and says Johnny isn’t a woman beater.

It is such a sad situation for all involved, and we hope that Amber Heard and Johnny Depp can come to an agreement. Don’t forget to come back to CDL later for more celebrity news and updates.