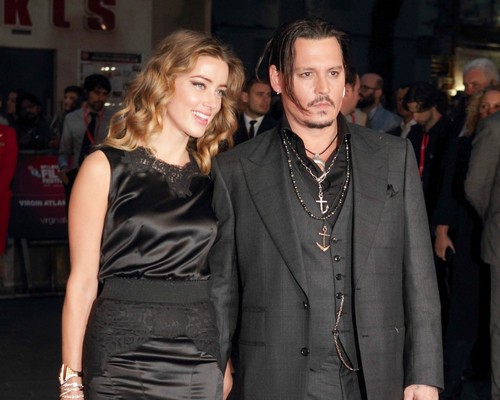 Amber Heard has filed for divorce from Johnny Depp, TMZ reports. The news comes as a shock to many people because the A-list actor just lost his mother three days ago. Amber filed a divorce petition on Monday, citing irreconcilable differences. The couple has been married only 15 months, yet Amber Heard is seeking spousal support.

It looks like the couple did not have a prenup in place. Amber Heard is looking to continue her lush lifestyle she’s grown accustomed to while married to super generous multi-millionaire Depp. Sources revealed the news is especially difficult for Johnny Depp because he was extremely close to his mother.

The legal documents claim that they legally separated on May 22, just 48 hours after his mother’s death. Depp and Heard faced an international battle when they illegally smuggled their dogs into Australia.

They were forced to publically apologize for their behavior and swore they would be more careful next time. Depp maintained that he thought they had a permit for the dogs and insisted it was all a terrible misunderstanding.

When the couple married in February of 2015, many people predicted the marriage would end in divorce. Reportedly, Johnny Depp was urged by several friends to draft a prenup to protect his assets, but Johnny trusted Amber and believed he had finally found his true love.

Poor Johnny has so much to deal with right now—his mother’s death, a divorce, and his movie “Alice Through the Looking Glass” premieres this week. It will be extremely difficult few weeks for the actor as he begins to process losing not only his best friend and mother but his wife of 15 months.

It is unclear how much money Amber Heard asked for in her spousal support claim. Many feel that it is ridiculous that she would have any claim to any support, considering they were married for 15 months. The story is still developing, and CDL will report any changes as soon as they are made public. Don’t forget to come back later for more celebrity news and updates.