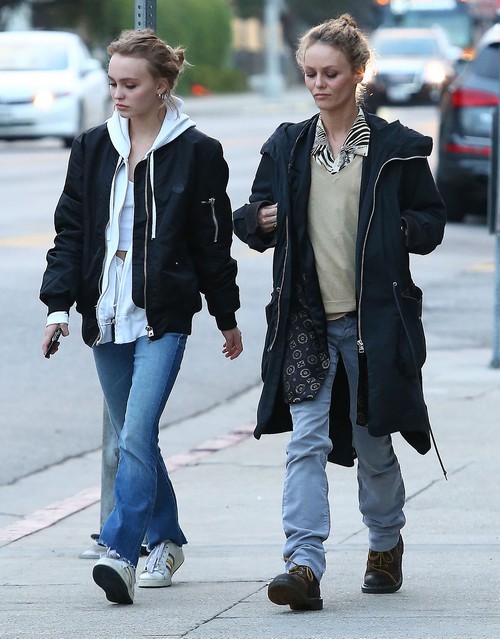 Do Lily-Rose Depp and Vanessa Paradis bond over hating Amber Heard – do they share a disgust with the opportunist? Mother and daughter have Johnny Depp to thank for his latest choice in wife material, opportunist Amber Heard.

Why, Johnny, why? Why did Johnny Depp have to marry Amber Heard? How could his taste in women have gone so wrong after he had it so right for so many years? When you see Johnny Depp in a relationship with Vanessa Paradis for a beautiful 14 years where they made two beautiful kids, Lily-Rose 16 and Jack 13….. you can’t help but wonder how he could love two women that are so different.

The gorgeous Vanessa Paradis and her growing-up-way-too-fast daughter, Lily Rose Depp were seen out in West Hollywood shopping for shoes like we ladies love to do. They swung into Shoe Palace to pick out the perfect pair and you can’t help but wonder what they were chatting about.

We can imagine they have their time of ripping Amber Heard to bits with some lovely verbal jabs – we only wish we cold be a fly on the wall for those conversations.

As a 16 year old with a 29 year old step mom, I am sure that Lilly-Rose Depp has serious dirt to dish on Amber Heard when she has time to bond with Vanessa Paradis.

Lily-Rose has got to wonder why her father, Johnny Depp would marry a woman who bounces back between men and women…. who only went straight just to get her hooks into someone as hugely famous as Johnny Depp. Lets be real, he could be Amber Heard’s father.

She clearly is using him for a massive career boost. Is all the booze guzzling Johnny Depp doing really blinding him to his young wife’s motives?

How about back in September 2015 when People reported that Johnny Depp had to sell his gorgeous yacht that he had named after Vanessa Paradis because she wouldn’t get on board, literally. The insider reported,

“Johnny loved that yacht. But he bought it for Vanessa. And Amber is still jealous of her.”

Go figure. She is that insecure. Amber Heard has got to know that Johnny Depp is always going to love Vanessa. They have two kids together, which is a bond that can never be broken.

So if Amber Heard decided to be a lesbian again, do you think that Johnny will go back to Vanessa? He did confess that unending love for her to Mail Online saying,

“She’s a great mother and a great woman. And when you’ve got a woman who’s been good to you, who you have a couple of kids with, you don’t just abandon ship. The love may change, but you keep loving her, no matter what.”

We can all hope that Amber Heard will just go away and that Johnny Depp will put down the bottle long enough to realize that he made the wrong choice when he married Amber Heard. Lets all cross our fingers okay?

Who do you think suits Johnny Depp better? Vanessa Paradis or Amber Heard? Sound off in the comments below!

Vanessa Paradis and her daughter Lily-Rose Depp spotted out shopping in West Hollywood, California on January 18, 2016. The pair stopped by Shoe Palace to pick up some shoes. FameFlynet