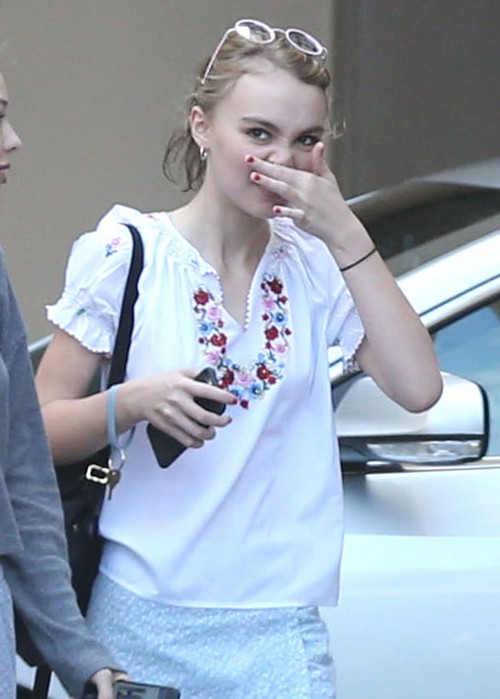 Is Johnny Depp’s daughter Lily-Rose Depp bi-sexual or gay? The 16 year old seems to be following in her step-mother Amber Heard’s footsteps – and has participated in a LGBT campaign that promotes people who don’t “identify as 100% straight.” Lily posed for a photo spread for Self Evident’s Truth Project, the mission of the group is to capture photos of 10,000 people who don’t consider themselves 100% straight – she is not the first celeb to do so, Cara Delevingne has also participated in the campaign.

Johnny Depp and Vanessa Paradis haven’t addressed their 16 year old daughter’s sexuality – so it is pretty unclear what part of the spectrum she falls in. She could just be curious, be full-blown bi, or maybe she doesn’t lie guys at all and considers herself a lesbian. Ironically, Johnny Depp’s wife Amber Heard also identifies as bi-sexual, and has openly dated women in the past.

Here is where it gets interesting though, the activist that is behind the Self Evident’s Truth Campaign is none other than iO Tillett-Wright, yes the same iO that Amber Heard was rumored to be cheating on Lily’s dad Johnny with. iO shared the photo of Lily-Rose on social media, and captioned it “’I’m so proud of my baby girl @lilyrose_depp. She decided she wanted to be in @selfevidentproject because she falls somewhere on the vast spectrum, and I couldn’t be happier to welcome her to the family. She’s a tiny gem of a good human. #prouduncle #weareyou.”

Johnny Depp reportedly despises iO because of her relationship with his wife Amber Heard – and just a few months ago Amber spent a weekend in New York City with iO, further fueling rumors that she was cheating on Johnny with her. So, we are super confused as to why Lily-Rose Depp and iO are suddenly BFF’s. How does Johnny feel about his daughter hanging out with the woman that is trying to steal his wife? Is this something Vanessa Paradis orchestrated to get under Johnny’s skin? Or maybe Johnny is completely aware of Amber’s relationship with iO and is totally okay with it? Let us know what you think in the comments below!

Model Lily-Rose Depp and a friend spotted out and about in Beverly Hills, California on July 21, 2015. Lily-Rose had just been named the new face of Chanel. FameFlynet