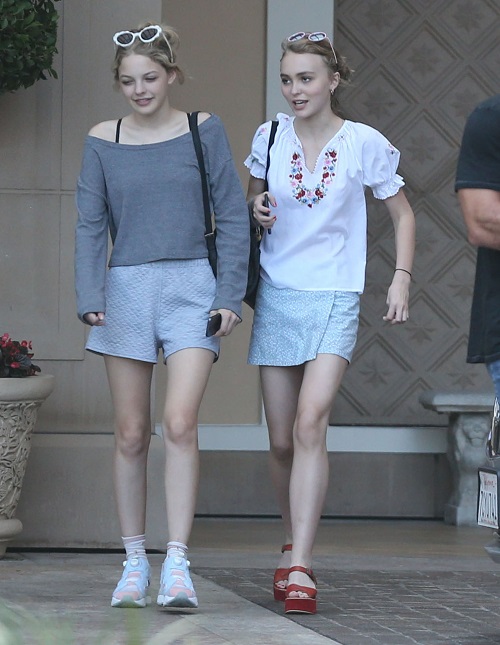 Johnny Depp and Vanessa Paradis’s breakup was 12 years ago, and since their split Vanessa has been the central parenting figure in their 16-year-old daughter Lily-Rose’s life. Now that Lily is growing up, and beginning her own career, Vanessa and Johnny aren’t exactly seeing eye to eye on their young daughter’s endeavors and it is reportedly causing some major co-parenting drama.

This month Lily-Rose made headlines when she landed a major modeling campaign with Chanel – which is no small feat. However, the 16 year old’s very mature photo shoots aren’t exactly settling well with her Oscar-winning father Johnny Depp. Johnny really has no say in his daughter’s career moves though, seeing as how Vanessa Paradis has been picking up a lot of the parenting slack since their break-up. And Lily-Rose has always been “Team Vanessa” since the breakup. Rumor has it she isn’t thrilled with her father’s decision to marry his much younger girlfriend Amber Heard.

According to this week’s edition of OK! Magazine, Johnny Depp’s thoughts on his daughter’s career have fallen upon deaf ears to his ex Vanessa Paradis and their budding teen daughter Lily-Rose. An insider dished to OK! Magazine, “Johnny is over-protective. Vanessa is more encouraging of her wild, artistic side, and she already has a major studio in love with Lily.”

So, lesson learned – if you want any control over your daughter’s career, don’t dump her mother and run off with a woman who could pass as your daughter. Honestly, Lily-Rose is the daughter of Johnny Depp. Her catapulting into the world of fame and fortune wasn’t exactly unexpected. At this point, Johnny should just be grateful that all his teenage daughter is doing is modeling for Chanel, and she hasn’t turned out as bad as some of his fellow celeb’s children have.

Do you think Johnny Depp is over-reacting? After his breakup with Vanessa Paradis, did he lose his say in Lily-Rose’s life? Let us know what you think in the comments below!