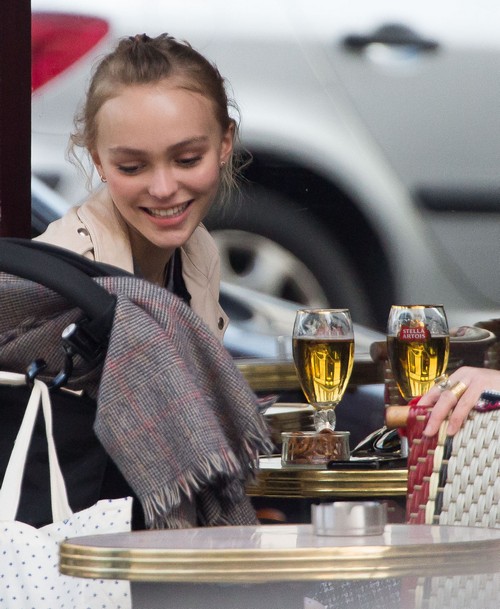 Vanessa Paradis just headed out of LA with Lily-Rose Depp and Jack Depp in tow. Are Vanessa and her two kids with Johnny Depp ditching town because of Johnny’s recent drunken antics and his outrageous behavior with new wife Amber Heard?

Is the puffy face a sign of too much partying? At the same event, Johnny thanked his 23 years’ younger wife Amber Heard when he accepted an award. He thanked her for “putting up with him.” Depp looked sloppy on the red carpet as well with some sort of white substance splattered on his pants.

Has Vanessa Paradis had too much of Depp’s drunken shenanigans? Is she worried that he’s a bad influence on their kids Lily-Rose and Jack? Depp’s greasy appearance has gotten worse than usual and it can’t be lost on Vanessa that he seems to be losing some control.

Is this all part of the lingering mid-life crisis that led Johnny Depp away from solid and loyal partner Vanessa Paradis – after leaving Vanessa Johnny wound up in the arms of much younger Amber Heard? Is he on a path of self-destruction?

Depp has long said his pal Marlon Brando was one of his screen idols, but now it looks like Johnny may be channeling the over-indulgence his former co-star and screen legend Brando was famous for. If he keeps on piling on the pounds, he may end up looking like chunky Brando.

Did Vanessa Paradis leave LA so that she could shield her kids from Depp and leave his young wife Amber to clean up his mess? Paradis has her hands full already. Daughter Lily-Rose Depp doesn’t seem to be in school even though she’s just 16 and has her 24 year old divorced rumored Boyfriend Ash Stymest constantly at her side.

Is Vanessa struggling to deal with her teen daughter acting like an adult and getting no help from drunken Johnny Depp? And how does all of this impact Depp’s son Jack? In recent years, he’s seen his dad dump his mom, then take up with another woman, and now this descent into sloppy drunkenness.

Although Depp bought Paradis a $4 million LA mansion so the kids could be close to him after their split, perhaps Paradis should keep her kids at her other home in Paris far away from Depp. Is Depp spiraling out of control? And will Amber Heard stand by him as he circles the drain?

16 year old actress Lily-Rose Depp, the daughter of Johnny Depp & Vanessa Paradis, is spotted out and about in Paris, France with her rumored boyfriend 24 year old model Ash Stymest on March 22, 2016. Lily and her beau enjoyed lunch at Le Progres with Lily’s aunt, Alysson Paradis. And while a relationship hasn’t been confirmed, rumors of a romance between Lily and Ash have been circulating since October!

Vanessa Paradis is seen departing on a flight at LAX airport in Los Angeles, California with her children Lily-Rose Depp & John Depp on March 21, 2016. Lily-Rose’s boyfriend Ash Stymest was also along for the trip. FameFlynet