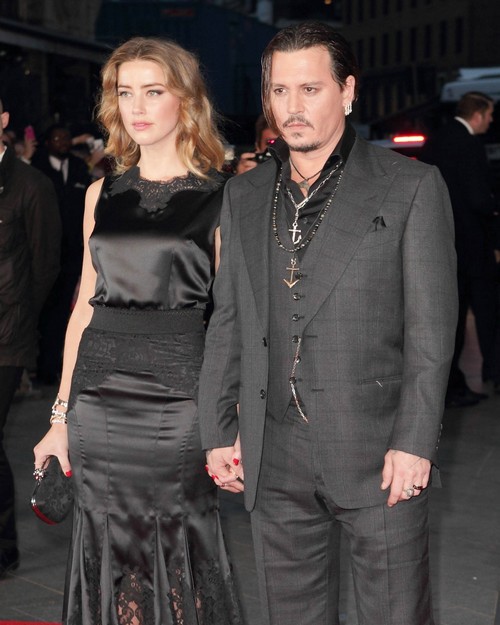 Johnny Depp’s divorce is sure to cause all-out war on Amber Heard by the actor’s family and friends. Those close to Johnny hated Amber and thought she was a gold digger who turned ‘straight’ in order to lure Johnny into a self-serving marriage.

Amber Heard’s divorce petition sites irreconcilable differences and demands spousal support. Since the news is so fresh it is not known how much Amber expects Johnny to pay after only 15 months of marriage. The couple has no prenup and Amber may get exactly what she wants. Johnny, who is worth in excess of $400 million, has filed legal documents asking the judge to reject Amber’s request for support.

Sadly Johnny’s mother, Betty Sue Palmer, who hated Amber according to TMZ, died just days before Amber filed for divorce. How cruel is that? Johnny’s still mourning his mother and Amber serves Johnny with divorce papers? And demands spousal support?

It was never a secret that Johnny’s mother Betty Sue, his daughter Lily-Rose Depp and his son Jack Depp absolutely hated Amber. We won’t even mention how Vanessa Paradis felt about Amber! They knew Amber Heard married Johnny to get her hands on the actor’s fortune and try to further her B or C-List acting career.

Friends had tried to reason with Johnny, begging the ‘Pirates of the Caribbean’ actor to protect his fortune and make Amber sign a prenup. But Johnny was blinded by love, trusted Amber completely and believed he had finally found the love of his life. In other words, Johnny was in male menopause and made a fool of himself.

That was a huge mistake. Amber Heard wants the distraught actor to continue paying for the lavish lifestyle Johnny Depp provided during the couple’s short marriage. If that doesn’t say gold digger then what does?

All the predictions made by family and friends about gold-digging Amber were correct. Observers always thought that it wasn’t about love for Amber – it was all about money and fame.

Asking for spousal support after only 15 months of marriage? At the very least Amber could have made an effort to stay married for at least 5 years like Katie Holmes did. What judge is going to award Johnny to pay Amber any amount of money after such a short marriage?