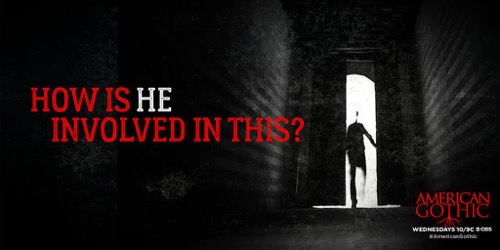 Tonight on CBS American Gothic airs with an all new Wednesday, August 24, season 1 episode 10 called “The Veteran in a New Field,” and we’ve got your American Gothic recap down below! On tonight’s episode, SBK’s accomplice resurfaces and causes panic in the city.

On the last episode, Key secrets were revealed as Garrett recalled his time in the forest and Alison tried to take down a reporter, but met shocking results. Did you watch the last episode? We’ve got your detailed American Gothic recap right here.

On tonight’s American Gothic as per the CBS synopsis “SBK’s accomplice resurfaces and causes panic in the city; Alison asks Brady to help clear her name; Tessa has suspicions about Madeline; and Cam makes a decision about Jack’s custody.”

American Gothic airs tonight at 10pm with an exciting episode, we will be live blogging the show with all the up-to-the-minute details so make sure to come back to Celeb Dirty Laundry and check out our live American Gothic recap. Can’t wait to see how all the drama plays out, how about you? Are you excited for this new show? Hit up the comments down below!

Tonight’s episode of “American Gothic” picks up after reporter Jennifer was murdered on the air by the Silver Bells Killer. Brady and his team contemplate a copycat killer as they compare all the matching details of Jennifer’s crime scene with previous investigations: the bodies were tied the same way, both killers used pine scented cleaners, and both bells had small indentations on the inside. Meanwhile, Garret’s lawyer demands that he be released from jail.

Madeline was successful in getting the charges dropped. Jennifer’s murder has hit Alison hard in light of her blackmailing the reporter prior to her death. While Madeline and Alison are discussing the newest developments, the police show up at Alison’s office demanding the guest book from Mitchell’s funeral and tells Alison she is needed for questioning at the station in connection with Alison’s murder. At the jail, Tessa visits Garret and again questions his involvement in the killings. Garret tells her about assisting his friend Al Jenkins with his death during his time in the woods. He also tells her that Cristina is pregnant with his child.

At rehab, Cam is beginning his transition out of the program. He invites his nurse out on a date but she declines. At the police station, Brady clashes with the FBI over his handling of the SBK investigation. He sees Alison at the station being questioned by his partner and intervenes as she is accused of killing Jennifer out of jealousy for sleeping with her husband Tom. Alison insists that she will only be questioned by Brady or she will refuse to cooperate. After asking Brady to close the blinds, she reveals that she believes Jennifer was murdered because of her and that she thinks she know who the killer is. She names Mayor Connelly as the Silver Bells Killer’s accomplice and shows Brady the evidence that Jennifer found of his partner Carter meeting in secret with the current mayor.

Madeline hears a noise inside her house and after going upstairs finds that a window is open and three belts are laid out in a line on the sofa next to the window. She then encourages Cam to file for sole custody of Jack. He says that he will drop by to see her later to see how she is and then he will think about filing. Garret has been released from jail and Tessa tells him that Cristina’s number has been disconnected and that she may have left town. Meanwhile, Cam brings Jack to Sophie’s and after seeing the semi-morbid history project she is helping him with, warns her that his lawyer will be sending along paperwork later in the week.

Brady and Alison begin to probe into the mayor’s connection with Jennifer’s death. Madeline hands over the guest book and sympathy cards from Mitchell’s funeral to the police, along with photographs of the mourners. Tessa brings Garret home and overhears her mother on the phone saying, “Why were you at Mitchell’s funeral? After everything that went on between you two, you should have never been there.”

Tessa asks Madeline why the FBI was here and she tells Tessa that the current theory is that SBK attended Mitchell’s funeral. After she leaves the room, Tessa checks the phone and sees that Caleb O’Connor is the last person dialed. Garret asks Cam for his car keys, and Cam is afraid that Garret is going to skip town again. Cam tells Garret that Jack feels really connected to him and it would mean a lot to him if Garret attended the Boston history presentation. Meanwhile, Brady and Alison find a hidden safe in Jennifer’s apartment. After figuring out the combination, they discover a memory stick with the mayor’s name on it.

The two ambush Carter and the mayor with evidence Jennifer obtained by bugging him. In it, Carter says that she destroyed all the evidence that tied Conley to the crime scene. The mayor said that the night Morales was murdered, he was over at his house because he needed his help with his mayoral campaign. The two argued and the mayor stormed out. The next day when the mayor heard about the murder, he realized that he had left a cufflink at Morales’ house and asked Carter to destroy the evidence in exchange for $25,000. Once the belt was found, the mayor said he became paranoid. He also said he has an alibi for the time when Jennifer was murdered.

Back at the house, Madeline picks up her purse only to discover that it is full of silver bells. At the Boston history presentation, Tessa asks Madeline who Caleb O’Connor is. Madeline says that Caleb is the man she was having an affair with, who Mitchell almost beat to death. Jack presents his project as the family watches: his presentation is about a vat of molasses that exploded and killed some of the townspeople. At the station, Brady again clashes with the FBI over his conflict of interest with the Hawthorne family.

The FBI dismisses him from the case and puts him on temporary leave. At Boston history night, Cam is thrilled with Jack’s presentation and tells Sophie that he won’t exclude her from Jack’s life. Cam’s friend April showed up to the presentation and tells them they need to keep their relationship platonic. Brady tells Alison and Tessa that he was removed from the case. Jack and Cam go for a walk and buys candy at a street vendor. When Garret opens the box, he finds drugs inside and realizes that Sophie has been having Jack buy her drugs for her.

He confronts Sophie and says that he can now get full custody of Jack. Tessa and Alison meet Caleb and he tells the women about his relationship with their mother. Caleb said that Mitchell ambushed him the minute he arrived at the house and he never made it inside, casting doubt on Madeline’s story about Mitchell dragging Caleb down a flight of stairs. Garret buys a corn grinder at a local store and then digs up the body of his friend Al to destroy the evidence of the murder.

Tessa and Alison tell Cam that his memory of Mitchell dragging someone down the steps wasn’t Caleb and the three confront Madeline about her lies. Meanwhile, while Garret is grinding down Al’s bones, Brady appears with his gun raised and tells him not to move.

Tonight’s episode leaves Garret in the precarious position of being found destroying the remains of a dead body, the mayor and Carter have been eliminated as suspects in Jennifer’s murder, Sophie is in danger of losing custody of Jack, and Madeline’s lies about Mitchell are beginning to unravel.