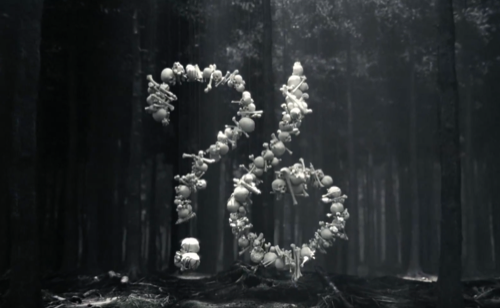 AHS’ Ryan Murphy says the newest trailer for Season Six might provide clues to next season’s theme. In the video, which is titled, ”The Harvest”, shows a group of straw men slowly making their way through a field with a girl holding a sickle (scythe) walking behind them. Honestly, is there anything you have watched that is scarier than a young girl walking around an open field with a sickle in her hand?

How are they all going to be connected? When you are done viewing the recap of the last five seasons, you are given a whole new scare-scape of images including a demonic insect-man, a nasty scalp suturing, a woman screaming as a green creature grabs her in a lake, reminding us of some 80s B-rated horror movie. In the final scenes of the trailer, you see bodies contorting in ways they definitely should not be able to do naturally. Once you have seen both of the most recent trailers, you will never trust a scarecrow or attend another Burning Man again.

Although the producers and creators of American Horror Story franchise, will not reveal the theme for the new season, fans all continue to speculate. The one thing we do know is how the trailer named “Anthology” thus far have close-ups of eyes, mouths, heads and specifically the brain. Are those visuals hints that Season Six is going to rely heavily on one’s senses, or the altering of one’s state of mind.

Do not forget that American Horror Story Season Six will return to FX on Wednesday, September 14 at 10 p.m. ET!