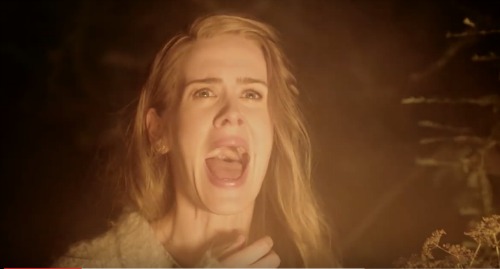 Tonight on FX their award-winning anthology American Horror Story airs with an all-new Wednesday, September 21, 2016, episode and we have your American Horror Story recap below!  On tonight’s AHS season 6 episode 2  will pick up where episode 1 left off, Shelby will still be lost in the woods and will eventually find her way home.

Did you watch last week’s episode where Shelby wandered around the woods calling for help and she stumbled across more of the voodoo dolls hanging from the trees? If you missed the episode we have a full and detailed American Horror Story recap, right here for your enjoyment!

On tonight’s American Horror Story episode as per the FX promo video, “Shelby will have a traumatic experience while lost in the woods.  She will meet Colonist who are devil worshipers.”

Tonight’s episode of American Horror Story kicks off where we left off last week – Shelby is running through the dark woods, and she stumbles across some sort of horrific ritual. A woman is chanting, she scalps a man and has her minions sacrifice him over a fire with a pig’s head pulled over his head. Shelby runs out of the woods screaming, and straight in to her husband Matt’s sister’s car.

Lee rushes Shelby to the hospital – she’s going to be okay. The doctors think that she is on some sort of jokes because she is rambling about the human sacrifice, to their shock, Shelby is completely clean. Matt promises Shelby that as soon as she is released from the hospital, they will move to a new house. Shelby shocks him by announcing that she wants to say. Shelby thinks she recognized one of the mountain men at the sacrifice and that it was all an elaborate hoax to scare her and Matt away. Shelby isn’t giving up her house that easy …

Despite all of the creepy things that have been going on, it’s Lee’s weekend with her daughter Flora, she has her ex-drop their daughter off because she desperately wants to see her. It’s not long before strange things start happening. Lee catches Flora in one of the bedrooms talking to an imaginary friend named Priscilla. Lee is horrified when Flora says that her imaginary friend needs help getting rid of “all of the blood.” Lee finds a small child’s bonnet in the house – and Lee says that it is just like her friends Priscilla’s.

That night everyone heads to bed and its only a matter of time before Shelby can hear howling outside. She grabs a baseball bat and heads outside – Matt chases after her with a flashlight. Shelby is determined to prove that she isn’t afraid of the mountain men that she thinks are harassing them. Matt find Shelby standing in front of some sort of burning cross with a pig head on it.

Matt and Shelby call the police frantically, they finally agree to put a squad car in their driveway to keep an eye on them. Shelby and Matt head back to bed, they finally feel safe. It’s not long before Matt is woken up again by the sound of a phone ringing. He heads downstairs and stumbles across two creepy women in nurse’s uniforms. They appear to have some sort of nurse’s station set up in his living room and they are caring for an elderly woman. The nurses shoot the woman in the head and kill her because she is “talking back to them.” Matt screams and runs back upstairs, he thinks that he must be dreaming.

The next day Mason shows up to pick up Flora – Lee and Mason find her hiding in the closet and talking to her imaginary friend Priscilla. Flora says that Priscilla is going to kill them all. Mason freaks out and takes her to the car and tells Lee that she is never coming back there. Lee is devastated, she falls off the wagon after her daughter leaves and gets wasted. Shelby and Matt find Lee in the kitchen, clearly drunk, Matt puts his sister to bed. He heads back downstairs and finds Shelby staring out the window at what appears to be an old woman standing in the yard. They head outside and investigate but the woman seems to have vanished. They do find a trap door that the woman appeared to be standing on. Matt removes the lid, there’s a ladder that leads down underground

He heads back downstairs and finds Shelby staring out the window at what appears to be an old woman standing in the yard. They head outside and investigate but the woman seems to have vanished. They do find a trap door that the woman appeared to be standing on. Matt removes the lid, there’s a ladder that leads down underground in to some sort of cellar. Meanwhile, inside, Lee stumbles out of her room, and appears to be being chased by some sort of demon with a pig’s head.

Shelby and Matt head down in to the cellar in their yard – it looked like someone was living down there at one point. They find a camcorder and a TV. They head back to the house and watch the tape – it’s a crazy man, he frantically explains that the house is haunted, his named is Elias Cunningham, and he was writing a book about two sisters that opened an assisted living center in the house.

According to Elias, the two nurses were sisters Miranda and Bridget, and they were killing their elderly patients. They only killed patients who’s names spelled out the word “Murder.”

Matt and Shelby are horrified when they realize that the nurses that Matt seen were the ones that Elias is describing in the video. They turn back to the TV, and Elias is back inside the haunted house – THEIR haunted house. It looks like a girl appears on Elias’ camcorder screen, and then the video goes dead.

Matt follows Lee inside and tries to talk to her about taking Flora, she whines that Mason wasn’t going to let her see her daughter anymore. It’s not long before Mason calls and demands to know if Lee took Flora there, he is on his way to get her and threatens to call the police.

Flora slips outside of the house while Lee is talking to Matt. Lee, Shelby, ad Matt begin searching the woods frantically and searching for her – they find Flora’s yellow jacket hanging at the top of a tree, hundreds of feet in the air. The little girl seemed to have disappeared in to thin air…