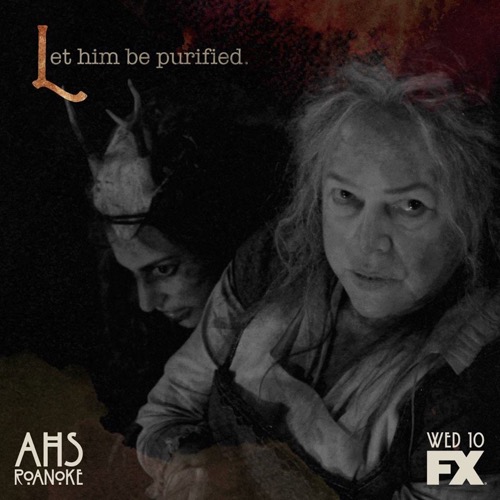 Did you watch last week’s episode where Shelby had a traumatic experience while lost in the woods and she met Colonist who were devil worshipers? If you missed the episode we have a full and detailed American Horror Story recap, right here for your enjoyment!

On tonight’s American Horror Story episode as per the FX promo video, “Matt, Lee & Shelby search for her daughter.  Meanwhile, Matt finds something shocking in the refrigerator.”

Tonight’s episode of American Horror Story kicks off where we left off last week – the police have arrived, Lee’s daughter is still missing, they found her jacket at the top of a tree and the little girl is nowhere in sight. Lee is certain that the hillbillies that have been tormenting them took Flora.

Lee is an ex-cop, so she knows the drill. She knows that time is ticking and the cops were not doing due diligence. Matt, Shelby, and several volunteers hit the woods to search for Flora. Matt and Shelby hear Lee calling for help. She didn’t find Flora’s body – but she did find her doll lying on the ground. Someone took the head off and replaced it with a dead pig’s head.

Matt, Shelby, and Lee find an abandoned farmhouse near the doll and they head inside to see if Flora is there. The house is empty, and disgusting, but they hear a noise coming from the barn. They stumble upon two dirty and delusional children, they appear to be nursing on a dead pig as if it was their mother.

The police bring in the boys to a local hospital. They are certain that the family took Flora and fled and left behind the two boys. A social worker tried to talk to the boys to get answers, but they were so suffering from malnutrition and apparent mental disabilities and could barely speak.

The search went on unsuccessfully for 72 more hours. No one slept for days. They decided to call it a night and get some sleep and get up in the morning. Mason, Flora’s father, loses it – he accuses Lee of being responsible for Flora’s disappearance and hiding her somewhere. He snaps at her and pushes her on to the floor and storms off.

Everyone heads to bed, it’s not long before Matt’s phone starts ringing. The cops were calling because they found a body. Matt wakes up Lee and Shelby and they head to the crime scene. It’s not Flora’s body though, it’s Mason. Someone tied him to a stake and burnt him alive.

The next day Matt and Shelby look at the security footage. They realize that Lee left the house right after Mason and she was gone for 4 hours in the middle of the night. Shelby thinks that Lee killed Mason so that he didn’t tell the police his theory about her kidnapping Flora. While they are all arguing over whether or not to go to the police – an old man walks in to the house and says that someone called him to help find Flora.

The strange man says that he was sitting in New Orleans and a spirit reached out to him. Apparently – his name is Cricket and he can talk to dead people. Shelby looks him up on the internet and learns that he is actually legit, and he has worked with the FBI in the past to help find missing children. Lee is skeptical, until he points out the closet that Lee found Flora playing in the day before. He says that Flora is not dead, and she wasn’t taken by the living, she was taken by a ghost named Priscilla. That’s the name that Flora called her imaginary friend.

Cricket holds a vigil in the livingroom to try and summon Priscilla – instead he summons an old female ghost named The Butcher. She doesn’t have Flora, she says its her job to protect the house from trespassers, and if she had Priscilla, she would already be dead. Matt was skeptical of Cricket, but after the ceremony and the windows shattering – it’s pretty clear that Cricket is the real deal.

Cricket shouts “Croatoa” at the ghost and then she leaves. Cricket tells Matt and Lee that he knows where Flora is, and he will take them to her for $25,000. They don’t have that kind of money and Matt shouts at Cricket that he is nothing but a con artist.

Lee isn’t playing any more games, she pulls her gun on Cricket and demands answers. Matt convinces her to put down the gun, and then Cricket stomps out. Before Cricket leaves, he whispers something to Lee about her first daughter Emily. Apparently, Lee had another daughter when she was just 17 years old. She was stolen out of the car when she was a baby, and Lee left her alone to go in the store.

The next day, Lee pays Cricket a visit and pays him. He reveals that he has done some research and The Butcher’s real name is Thomasin, and she was one of the settlers in the missing colony of Roanoke. Cricket explains Thomasin’s history – she was left in charge of the settlement, but the people were starving, so they overthrew her and traveled inland and left Thomasin behind to fend for herself. Thomasin sold her soul to some sort of demon in the forest who saved her from wild pigs. Once she got her strength back – she tracked down the settlers that abandoned her and left her for dead and killed the ones that betrayed her and moved them on to the land where Shelby and Matt are currently living.

That night, Cricket heads out in the woods with Matt, Shelby, and Lee. Cricket summons The Butcher and makes a deal with her – Matt agrees to burn down the house and leave if The Butcher gets them back Flora. Of course, Shelby freaks out, she cant believe that Matt is agreeing to burn down their house. In the midst of everything, Matt disappears – Shelby finds him in the woods…having sex with a woman. What Shelby doesn’t realize, is it is not an actual woman, it’s the same woman that The Butcher met in the woods thousands of years ago.

Matt and Lee return to the house – Shelby is there waiting for them. The police arrive and arrest Lee, apparently Shelby called the cops on her and reported her.