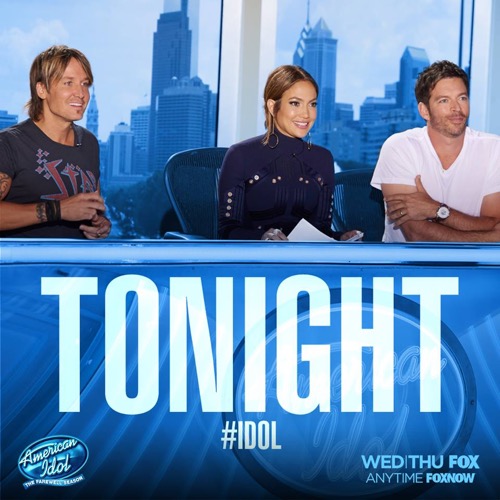 It’s another exciting night of AMERICAN IDOL on FOX with an all new Wednesday January 13, season 15 episode 3 called “Auditions #3” and we have your weekly recap below. On tonight’s episode, auditions continue as the star search’s 15th season progresses.

On the last episode, auditions continued in Little Rock and San Francisco on Part Two of the two-night Season Premiere of AMERICAN IDOL. Did you watch the last episode? If you missed it, we have a full and detailed recap right here for you.

On tonight’s episode as per the FOX synopsis, “Ryan and the judges continue their search, auditions are held in Kansas City, Mo.as they travel the country in hopes of finding the next big thing.”

#AmericanIdol begins in Philly with Gianna Isabella who is Brenda K Starr’s daughter. Jennifer knows her and Harry and Jennifer sing her mom’s song I Still Believe. She was an 80s one hit wonder. Her mom is there with her and says her daughter is the best thing that has happened to her.

She sings House of the Rising Sun. JLo says good job then says bring your mom in. Keith says she’s great. Brenda goes in and Jennifer hugs her. Keith sits her mom down in his seat. Harry asks her mom to vote and she says she would tell her she made it because she works so hard.

She says her friends party and she stays home and writes and works. Keith tells her to hand her a golden ticket. We see Clay Aiken giving advice to some hopefuls. He does some Idol trivia with them. Derek Huffman comes in next and he says he works in a dollar store in Rhode Island.

He has music and sings Angel by Shaggy. He’s not the worst but he’s not great by any measure. Jennifer says this is like how he does it in his bedroom at home. Keith says that’s the first time they had karaoke. Harry says it’s smart. Keith says yes to the boom box, no to him.

He pulls off his shirt and pouts and says they don’t like good entertainers. We now see Isaac Cole from a small town in PA. He grew up on a farm and says he loves the country lifestyle. He talks to Ryan about how much he likes Keith’s music.

He does Lee Brice’s Love Like Crazy. Jennifer says it’s a heartbreak song and says he’s got the blues. Harry says he seems smart and says country is usually Southern and he says don’t sing with a twang since he doesn’t speak with one.

He says you don’t need a fake identity and Keith says he’s work in progress and is close to being ready but not quite. All three say yes. He gets his golden ticket. He asks Keith to sign his guitar case. Jennifer says it’s hard to say no to people.

We see back in season 10 her first day and now it’s five years later. Now she’s good at the no. We see her saying no after no today. There’s a whole montage of no’s. Next is 17 year old Sarah Sturm from Virginia. She says she works at a place called Eggspectation.

She sings Meghan Trainor’s Lips are Moving. She does well and Jennifer calls her young and fearless and says yes. Harry says she’s special and says he likes her sound and Keith says yes too. Jennifer hands over the golden ticket and she skips out.

Clay hears a screechy awful singer then Ellis Banks is next. He says he works hard on his craft and says it will pay off today. He says the judges will never see something like this. He comes in wearing a glittery speedo, silver wig and cape.

He says he’s wearing a Jesus headpiece and brought one for the judges. Jennifer thanks him. He says he’s a janitor from Indiana and he sings Gaga’s Born This Way. He dances crazy and Harry shouts yes. They tell him it as fun but not what they’re looking for. The judges put on their Jesus wigs.

Next is Jenn Blosil and she says she’s quirky. She says she just wants to do her best. She does Radioactive by Imagine Dragons and asks to play the piano. She does and Jennifer says she finds her compelling and says she liked it a lot.

He says his grandpa gives him dating advice and we see him working the room as he calls himself a Ladies Man. He says he can’t wait to meet JLo. He sings an original song he says is about his experience with the ladies.

It’s not bad at all – very catchy. Keith is impressed and says he likes the song. Jennifer says she likes the Latin undertones. Keith says yes – Harry does too and JLo does too. He says he brought his foxy grandpa and they ask him to bring him in.

Harry tells them he did a great job and Keith shakes his hand. He says he tells him to pick out the worst feature in a woman and build it up. The other judges shake hands with him and they head out triumphantly.

John Arthur Green is the last contestant in Philadelphia. He says music helps keep his brother’s memory alive. He reveals he accidentally shot his brother when they were kids and playing cops and robbers. He was eight when it happened.

He sings Keith’s song Somebody Like You. He says he’s in Broadway right now in Matilda. Jennifer says she likes him but isn’t sure he can hang with some of the other contestants. Harry says no, but Keith and Jennifer say yes which puts him through.