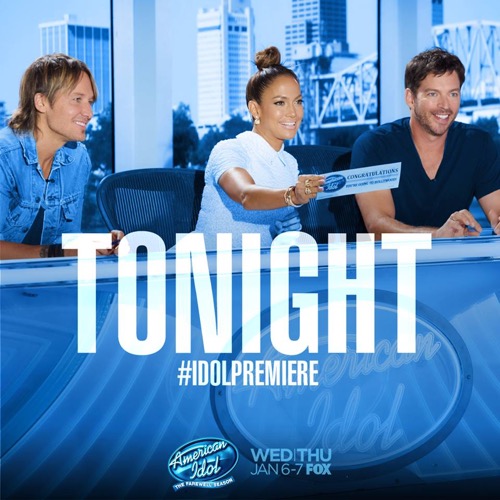 It’s another exciting night of AMERICAN IDOL on FOX with an all new Wednesday January 7, season 15 episode 2 called “Auditions #2” and we have your weekly recap below. On tonight’s episode, the conclusion of the two-part Season 15 opener features auditions in San Francisco and Little Rock, Ark.

On the last episode, everyone’s favorite singing competition returned for its highly anticipated 15th and farewell season. The fun began when host Ryan Seacrest and returning judges Jennifer Lopez, Keith Urban and Harry Connick, Jr. traveled to Denver and Atlanta, to discover the city’s best talent. The season promises to deliver the most talented group of singers yet and, as always, it’s up to the viewers to root and vote for their favorite contestants, ultimately crowning the next AMERICAN IDOL. Did you watch the last episode? If you missed it, we have a full and detailed recap right here for you.

On tonight’s episode as per the FOX synopsis, “auditions continue in Little Rock and San Francisco on Part Two of the two-night Season Premiere of AMERICAN IDOL.”

Tonight’s episode of American Idol kicks off with auditions in Little Rock, Arkansas. The first contestant to audition is from Hank’s home state in Louisiana. 16 year old Cameron Richard reveals that it is actually a miracle he is even there performing, he was born with a cleft pallet – and the doctors warned his parents when he was young that he may not even speak, let alone sing. Cameron performs a rendition of “Give Me Love” for the American Idol judges.

Jennifer Lopez “loved Cameron’s voice and his passion.” Harry Connick Jr. is impressed as well – he says that Cameron reminds him of Paul McCartney. Harry, Jennifer, and Keith Urban all vote “yes,” Cameron Richard is getting his golden ticket to Hollywood!

Up next is Memphis, Tennessee student named Daniel Farmer – he has been counting down the days til his auditions so that he “can seduce J-Lo.” Daniel performs D’Angelo’s “Have It Your Way,” for J-Lo and the other American Idol judges. Afterwards, Jennifer Lopez praises his voice and adds that Daniel is “funny, sexy, and confident – he has a very attractive quality.” Harry Connick Jr. cchallenges Daniel, he says that if he is going to “do the difficult dive then he needs to land it.” All three judges vote “yes” for Daniel Farmer – he’s going to Hollywood too!

19 year old Dalton Rapattoni performs for the American Idol judges next – he actually reveals that he is a vocal coach at the Texas ‘School Of Rock.’ After his rendition of an Andrew Lloyd Webber song – Harry Connick Jr. praises him for putting his own twist on it. Keith Urban his a huge fan because he appreciated Dalton’s “artistic contribution.” All three judges vote “yes” again, Dalton is getting a golden ticket to Hollywood.

LaPorsha Jennings’ turn to audition is up next – she brought along her beautiful baby girl Nyali. Recently, LaPorsha moved in to a woman’s shelter to get out of an abusive relationship – she hopes to make it to Hollywood so that she can provide a better life for her daughter. LaPorsha has J-Lo hold the baby while she sings “Creep” by Radio Head. Keith cheers for LaPorsha and says that he “loved her fresh new take on the song.” The judges re unanimous, they give LaPorsha and her daughter a golden ticket to Hollywood.

16 year old Maddie McCallister has brought along her award-winning chicken for her audition. Keith holds the chicken while Maddie performs “Cowboy Casanova” by Carrie Underwood. The judges love her chicken – but aren’t impressed with her singing. They think that her voice sounds “too young” and her voice needs a few more years – she isn’t getting a ticket to Hollywood today.

Up next is Mississippi farmer Trent Harmon, he’s been singing to cows his whole life and is ready to head to Hollywood. He performs “Unaware” by Alan Stone and blows Jennifer Lopez away. She can’t believe how R&B he sounds – she was expecting a country song. All three judges are impressed, and they don’t even have to vote – they give Trent his golden ticket to Hollywood.

Brook Sample, a 28 year old waitress from Tucson, Arizona is so overwhelmed she can barely introduce herself to the American Idol judges – but she manages to belt out a rendition of a Dixie Chicks’ song for Jen, Keith, and Harry. Afterwards Brooke tries to apologize – Harry tells her she has nothing to apologize about, she “did a great job.” Jen agrees that Brooke’s voice is “really really beautiful.” J-Lo, Keith, and Harry all vote “yes” for Brooke and give her a ticket to Hollywood.

Olivia Rox, a 16 year old, is up next – she sings “When I Was Your Man” by Bruno Mars and plays along on the piano in the audition room. The judges are impressed with the teen – they praise Olivia for having a “beautiful and unique” voice. She volunteers to do the song a second time on her guitar – but they tell her that isn’t necessary, she is definitely going to Hollywoood.

“Rise Up” by Andra Day is performed next by Melanie Trance and Harry Connick Jr jokes that he “is done” – he can’t believe how many amazing singers they have saw today. He jokes that he doesn’t even need to hear the rest of her song. Keith Urban and Jennifer Lopez agree – there is no doubt about it that Melanie is going to Hollywood.

Miss Alaska 2014 Malie Delgado takes her turn in front of the American Idol judges next – she even manages to fit in a rap solo during her audition. Jennifer says that Malie is “strong and present.” Harry Connick Jr. says that there is already so much talented and beautiful women on the show – he hopes that she is ready for a “dog fight.” All three judges vote “yes” for the pageant queen and give her a golden ticket to Hollywood.

Next the American Idol judges head to San Francisco, California for their next round of auditions – after a very successful trip to Little Rock, Arkansas. They decide to spice it up a bit – and Harry plays the part of the host and Ryan Seacrest sits down at the judges’ table. The first singer to audition is Brandyn Burnette, he sits down at the piano and sings an original song that he wrote called “Lost.” Afterwards Ryan Seacrest jokes that he “got an easy one to judge.” Harry, J-Lo, and Keith Urban all agree that Brandyn deserves a “yes,” and they send him to Hollywood.

15 year Kyrsti Jewel is up next – and she brought along her parents, who happen to be diehard American Idol fans who have seasons of the show on VHS. They have gone to all of the live shows – and are easily classified as “super fans.” Kryrsti performs “Mama Knows Best” Jessi J. Kyrsti’s parents cheer her on as she receives her golden ticket to Hollywood from Jennifer, Keith, and Harry Connick Jr.

Sarah Hayes, a 26 year old student is up next – and she has a total meltdown. She starts rambling excessively, and Keith Urban jokes that she must have gotten served some drinks before she cames in. First, Sarah tries to sing a Bonnie Tyler song, but she forgets the lyrics. After crying, she decides to sing “Invincible” and screws that up as well. Harry sticks up for Sarah – he thinks it is the judges’ fault that she is so frazzled because they were goofing around. Harry votes “yes,” but Keith and J-Lo vote “no” and Keith says that he thinks Sarah is “unstable.”

Tristan MacIntosh, a highschool student from Tennessee is having a tough time getting ready for her audition because her mother isn’t there. She was unexpectedly called to a mission in Afghanistan, she is a major in the army. Tristan sings a beautiful rendition of “Why Baby Why.” The judges are blown away by Tristan – Jennifer raves that she reminds her of Alicia Keys and she must have made her mom so proud today. Harry Connick Jr. has a surprise for Tristan – he reads her an email from her mother, and Tristan starts crying…then Tristan’s mom comes out from behind the curtain and everyone busts in to tears – even Keith Urban gets teary eyed as they give Tristan her golden ticket to Hollywood.