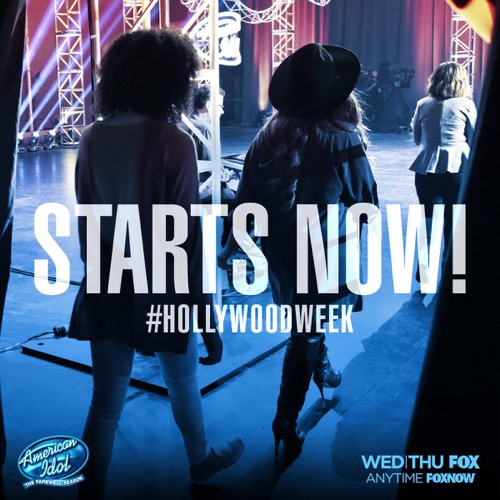 It’s another exciting night of AMERICAN IDOL on FOX with an all new Wednesday January 27, season 15 episode 7 called “Hollywood Round #1” and we have your weekly recap below. On tonight’s episode, Hollywood Week opens up and we get to see who moves forward in the competition.

On the last episode, Ryan and the judges continued their search as they travel the country in hopes of finding the next big thing. Did you watch the last episode? If you missed it, we have a full and detailed recap right here for you.

On tonight’s episode as per the FOX synopsis, “the judges have heard auditions from all over the country, and now it’s time for the best of the best to see if they are cut out for Hollywood.”

#AmericanIdol is in Hollywood this week. The judges take the stage and welcome all of the singers to Hollywood week one. Keith says they are there because they’re the best but it’s going to be tough. Jennifer says today is lines of ten and they need to stand out.

Harry says they will send half of them home today so leave it all on the stage. Ryan says the contestants will come out in groups of ten and step up to sing. Then the judges will decide who stays and who guys. Jordan Sasser from Atlanta is up first.

He and his wife both tried out, but he’s the only one that got a golden ticket. He does Tori Kelly’s Should Have Been Us. Next is pals Jackie Bundler and Dalton Rapatonni. Dalton does California Dreaming and Jackie sings Fall Out Boy’s Centuries.

The others sing and then they send the entire back row through – looks like they knocked out two on that group. Dalton, Jackie and Jordan all make it through. Jenn Blosil sings Brother by NeedToBreathe. Thomas Stringfellow does Too Close and Olivia Rox does Genie in a Bottle.

They send the front row throw on group two. Ryan says the girls took the auditions this year. Next is a group of mostly girls. Jessica Cabra does Photograph. Melanie Tierce does Invincible. Last we see for this line is Sinika Vaid that Harry said could win this when he saw her in auditions. Ryan says people watching were surprised Melanie didn’t move forward.

New mom La’Prosha Renae sings Roar while her baby girl watches from the audience. She gets through with her killer take on the Katy Perry tune.

The next group has some aspiring comedians among them. The next line has less comedians and more cute guys. We see a montage of some of the guys flirting it up hard. Harrison Cohen sings Keep Your Head Up. Daniel Farmer sings Treasure. Manny Torres does Can’t Feel My Face.

Harrison Cohen is stunned that he did not get through. Manny and Daniel did. Melanie Huber sang well but didn’t get to go. She was singled out for her row and didn’t make it.

Now it’s day two and the judges tell them not to be intimidated by all the cuts yesterday. Jeneve Rose Mitchell is in the first group. She has a big cello looking fiddle that she plays as she sings. She’s the only one in her group that gets through.

Some of the contestants that got through yesterday are out doing tourist stuff and see One Direction doing a sound check for a Jimmy Kimmel appearance. Gianna Isabella is part of the next group and talks about her momager. She does One Night Only.

Tristan McIntosh also has her mom there. Her mom missed her audition because she was overseas with the military but is here for day two. Gianna makes it through and so does Tristan. Kyrsti Jewel is in the next group as is Michelle Marie.

Michelle Marie sings Dibs. Kyrsti sings Got Me Good. Michelle gets through – looks like Kyrsti does not and she’s upset since it’s her birthday and says she’s still a big fan of the show. Jennifer says some people that did great when they were on the road had trouble here.

We see montage of those that didn’t make it. Jennifer says she hopes people get control of their nerves and do better on the next day. Trent Harmon hasn’t performed yet and he talks to another contestant. He got a phone call 20 minutes before his performance that he has mono.

He’s sick but is still going on to perform. He does Lay Me Down. Poh Scott also sings and dedicates it to her sister. Emily Brooke made it top 48 last season then got cut and she’s next – she does I Wish I Could Break Your Heart. They all get through.

The judges were so mean – they called part of the group forward and said they were going through and then let the others stew for a moment then tell them they’re going through as well. Jennifer says they have to have fun too.