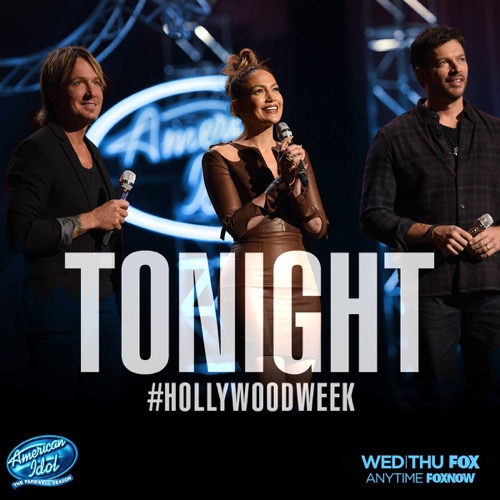 It’s another exciting night of AMERICAN IDOL on FOX with an all new Thursday January 28, season 15 episode 8 called “Hollywood Round #2” and we have your weekly recap below. On tonight’s episode, Hollywood Week continues with the groups.

On the last episode, Hollywood week began. Jennifer said she hopes people get control of their nerves and do better on the next show. The judges were so mean – they called part of a group forward and said they were going through and then let the others stew for a moment then told them they were going through as well. Jennifer said it was all in fun. Did you watch the last episode? If you missed it, we have a full and detailed recap right here for you.

On tonight’s episode as per the FOX synopsis, “the contestants press on to show the judges what they’ve got as Hollywood Week continues.  Tonight is the group rounds. Find out who is cut out to be a superstar.”

Round Two of Hollywood Week began with only a hundred and eight contestants out of the original hundred and ninety.

Therefore, the remaining vocalists knew that they had to bring it on tonight’s all new episode and unfortunately they ran into a hurdle. Tonight there was the infamous Groups Rounds. And Group Rounds was when the contestants split up into groups of three or four but are still supposed to come together as a group of strangers in order to pull off semi-decent performance. So, really, the Group Rounds was quite demanding.

Yet, there was a reason for that. This part of the competition was a test if nothing else. It was going to separate those that could work under extreme pressure and those that would crack. And a few people did end up cracking.

Once the groups began to form, a few groups began to notice certain problems. There was usually one person who didn’t agree with the musical direction of their group so they left and went to find another group they could join. And there was one young woman who just upped and walked away.

She hadn’t told the guys that were counting on her that she was leaving. Thus they ended up spending a few precious hours, of their own time, on looking for her. But after they contacted one of the American Idol guys, the girl was called and her father had then told the producer that his daughter didn’t think she could handle it.

In other words, she was out. She was out and she simply didn’t have the consideration to tell her group that she was leaving.

Although when it wasn’t people randomly leaving the show, there was also the problem of poaching. Groups that had only two members and that needed a third else it results in their disqualification had sometimes poached members from other groups. So the one thing this round was surely proving is that some people will literally do anything to make it to the next round while others weren’t as serious about a singing career as they thought.

And as the groups’ debuts finally got underway, there were actually a lot of groups that managed the impossible. They found ways in which everyone could shine but not lose their rhythm. And so a lot of groups got to move onto the next round as a whole. Which as some of us may know from seasons past doesn’t always happen.

But one group was forced into being a group of one. Trent had originally been in a group with three other people however his doctor’s call from back home had changed all of that. The doctor had sadly informed him that he had mono and the producers of the shows couldn’t risk him infecting anyone else.

So Trent was given a choice. He was told he could either sing solo or go home. And naturally he chose to do solo although he did pray his mono hadn’t affected his voice too badly.

And it hadn’t. Trent had wowed the judged with his rendition of Rather Be and Harry Connick Jr. had even made the terrible joke of saying he might actually prefer the mono version. Therefore, despite his medical condition, Trent made it through to the next round and he became one of the lucky ones.

On the other hand though there was just this one group that had gotten unluckily. Shelbie Z had left her other group in search of a better one when she came upon a group that was being run by basically a dictator. And her name was Lindsey

Lindsey had pressured her group into trying out all the songs instead of merely picking one right off the bat because she said they shouldn’t settle. So that meant they were literally singing everything while the songs were getting selected by the other groups. And if that wasn’t enough, Lindsey had also tried to arrange the way the other ladies sang their parts yet funnily enough she was the weakest singer.

In fact, that’s why she didn’t make through to the next round while the rest of her group did. She had slowed them down, pressured them, and when they still managed to move forward – Lindsey couldn’t be bothered with them. She shunned their hugs and moaned about her own lot in life.

Meaning she couldn’t be a team player even in defeat.

And the thing about that situation was that it wasn’t the worst of the competition nor the second to worst. There was the Anatalia problem coming at second place and there’s apparently two versions to the one story.

Anatalia was a young woman whose voice didn’t fit the song that her group picked. So Anatalia was going to ignore it but then her mother spoke up for and told her group members that neither of them were exactly feeling the song. And depending on who you ask, two different things happened that ended with Anatalia joining a new group that desperately needed a third member after someone had decided to go home.

Now according to Anatalia, her first group had refused to change the song and thus decided to leave her in the hallway by herself while they went off to practice. And so Anatalia had considered herself lucky that her mom had eventually the Group Chicken Noodle Soup. Chicken Noodle Soup and Antalia had agreed about a song choice and they had gone on to sing a stellar performance.

But according to Antalia’s old group NV Fare, they hadn’t kicked Anatalia out. They said that she had one off on her own because her mother had gotten into her ear and had persuaded her to leave. So they claimed to still wish Antalia the best seeing as they believe her mother was the actual problem.

And with two conflicting stories, it didn’t seem like there would ever be answer about what honestly happened. So it was the producers to the rescue. The producers had thankfully decided to show some footage from the night in question and admittedly it did look like NV Fare had ditched Anatalia.

Three of them had agreed about a song and had loved it so much that they hadn’t truly wanted to change just for one person. And if it was Anatalia that left them then why we’re did their change the members in their group while she had still been talking about the issue with her mother when they did so. Yeah 1+1 = they ditched Anatalia.

And coming in at the worst was when one young woman chose to backstab her own group. Eliz from Las Boricuas had been another person that had assigned herself as the leader of the group but it seems she had ulterior motives. Because she chose a song that only she knew by heart, she then let the others struggle to figure out how they were going to perform the song.

Like she literally sat down right after song selection in order to sink her group members and so thank god for Gianna’s mom. The older woman had been watching rehearsals and she saw how the other two girls struggled while Eliz tried to come across as the lead singer and them her backup. So the mother chose to speak up and fight for her daughter.

She said it didn’t make sense for two people to struggle through because it made the whole group look bad. So Eliz had reluctantly agreed to finally put in an effort with her group. And the end result was that the judges got to see how talented the other two ladies were while they sent Eliz packing.

So either they saw it for themselves or word got back to them but they had taken the time to teach Eliz about being a team player before they dismissed her from the competition. And apparently everything they said went in one ear and out the other. There was simply no cap to Eliz’s sheer bravado.

And there concludes the worst of the worst.

However, while some teams struggled, others appeared to be up for the challenge. And that’s why the last group act had still managed to knock out “Staying Alive” despite it being the same song that the group before them sang for the judges.

Because, as it turns out, some people were just born for this!