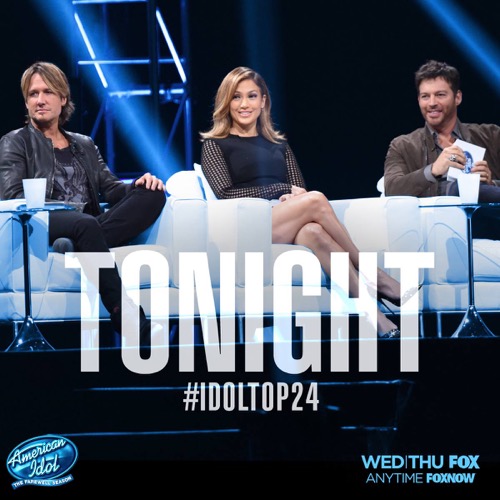 It’s another exciting night of American Idol on FOX with an all new Thursday February 4, season 15 episode 10 called “Hollywood Round #4” and we have your weekly recap below. On tonight’s episode, Hollywood Week continues and the Top 24 are revealed.

On the last episode, Hollywood continued on its third part and on the last day – it was the solo round. The signers had to perform with the band. First up was Stephany Negrete. She did Fire and Rain by Adele. JLo sang along. She did really well. The contestants were worried because they were not getting judges feedback instantly like they were used to and some of them were having nerve attacks because they don’t know what they thought about this. Did you watch the last episode? If you missed it, we have a full and detailed recap right here for you.

On tonight’s episode as per the FOX synopsis, “Hollywood week continues and the contestants are put to the test and the Top 24 singers are revealedWho will come out on top and be named the last American Idol?”

Tonight’s show is going to be an exciting one, which I’m not going to miss and neither should you. Tune in tonight at 8 PM EST! Celeb Dirty Laundry is your go to place for all the up-to-date American Idol News and we’ll be recapping the finale right here for you. Do you have a favorite to win? Hit up the comments and let us know who you think has the potential to be the American Idol!

The judges had a tough call on tonight’s episode of “American Idol” but ultimately they had come up with the final Top 24 that this show will ever see.

As we know this is the last season of American Idol so the judges had wanted to end things on a high note. And in order to do that they had to pick the best of the best. No pity picks and yet strong enough performers who clearly want this.

So first up was San Francisco contestant Stephany Negrette. Stephany had wowed the crowd on Wednesday with her rendition of “Girl on Fire” and therefore the judges had easier time with her. Because they knew they wanted her in the Top 24 but stellar performance showed that she was someone that America could vote.

And so Stephany had an easy yes. Although Denver contestant Shelbie Z had been worried about her time in front of the judges. It seems that a lot of people have told her that she could never make it so she hadn’t had a lot of confidence going in.

But the judges apparently loved her just as much as she loved singing because she had also been given a “yes”. And while there, it felt like everyone was to be able to make it through but there was sadly fifty-one contestants fighting for only twenty-four open spots. So Daytona contestant Michelle Marie hadn’t gotten lucky.

The teenager was told this was it for her and she accepted them with a maturity that had impressed the judges. And so this competition will not be the end of her. Though a lot of the early favorites were surprisingly cut as well. San Franciso contestants Colette Lush and Jessica Cabral both had a great start to this completion but somewhere along the way their lights just dimmed.

J.Lo said that the pressure of the competition sometimes had a way of defeating truly talented people. So the judges had said goodbye to a lot of young artist that they really liked but still knew couldn’t handle the rest of the show. Yet Mackenzie Bourg was just an all-around favorite.

The judges had loved him from his first solo round when he had gone on to perform that original song but his Wednesday performance had been the real clincher. He had the audience singing along with him when the judges never would have guessed that such a young audience would have liked that song. Much less know the lyrics.

So Mackenzie was probably the easiest one for the judges to say “yes” to. And following Mackenzie had been Trent Harmon. Trent had been diagnosed with mono during the first week in Hollywood but despite what that condition has been known to do – Trent was able to overcome it and give one great performance after another.

And therefore Trent had showed the judges what they wanted to see more than anything else. He showed them that he wouldn’t crack under pressure or illness. So a “yes” was exactly what he received on tonight’s episode.

But Jeneve Mitchell had to literally come down a mountain to audition for this show. And so the only bad news that the judges could give her was that it was going to be pretty hard for those people still on the mountain to vote for her next week. Because she had made it into the Top 24!

And there had been a string of yeses. There had been Jenna Renae, Kory Wheeler, James VII, Adam Lasher and they had all made it in the Top 24 as well. So as the spots began to fill up, some of the others had begun to worry about their own chances.

However, Little Rock contestant CJ Johnson had nothing to worry about. He had showed the judges that he could handle larger crowds and so they had told him “yes”. And both of the young Atlanta contestants – Amelia Eisenhauer and Lee Jean – had made it into the next round.

So admittedly a few people had been worried about whether or not they were what the judges were looking for. San Francisco contestant Avalon Young had always been a tomboy and so sure the judges would want her as she was but they did. And as for Dalton Rappatoni, he had kind of been left confused by some of the judges’ earlier choices so he had honestly prepared himself for the worst.

And yet the judges had loved his unpredictability. They had told him that they never know what they’re going to get with him and how that was going to draw people to him. So Dlaton had made it into the Top 24.

But the shocks kept coming. Manny Torres had been an early favorite with Jennifer but he had also struggled through his solo performance. And so everything had been riding on his showcase on Wednesday.

And while some may not have seen his performance as the rehabilitation he wanted it to be, he certainly seemed to have impressed the judges. So they made a judgement call and in the end he chose to believe in Manny.

So Manny had made it through. And he had eventually been followed by Thomas Stringfellow who had recently gotten his heart broken by his girlfriend back home.

Apparently the girlfriend wasn’t sure their relationship could make it with him being so fa away. So she hadn’t even waited to see if they would stick around in Hollywood. She just ended things and funnily enough she helped Thomas by doing so.

He had gone on to announce the breakup at the start of his performance on Wednesday and Harry had said that it had been the smartest thing he could do. Because not only did the breakup connect him with the audience but pouring all of his hurt feelings into his music had done wonders for him. So Thomas and then later Sonika Vaid had been given a “yes”.

Though Malie Delgado who was supposed to have made this great comeback following her brush with meningitis had been sent home. Keith had said during her showcase performance that she could have held onto a note a little bit longer. And so she has talent but she still needed some work.

And despite the upset, Harry as a father to teenage daughters tends to feel really badly when the younger ones begin to cry, there was some still good news. Olivia Rox, Emily Brooke, Jenn Blosil, and Trista McIntosh had all made it through into the next round.

But Giana Isabella had a rocky road. She was the daughter of pop star Brenda K. Starr and unfortunately her relationship with her momager had ruffled a few feathers.

Gianna had been practicing for her showcase when the musical director realized that she had been taking cues from someone in the audience. So he asked her who she was explaining herself to and it turns out to have been her mother. Who had also been giving her notes about what she was apparently doing wrong.

So Ricky Minor had to go speak with Brenda because the one thing that Gianna didn’t need was to have so many people in her ear. And he once Ricky got Gianna’s mom to back down, Gianna managed to take care of the rest on her own. Which is why Gianna made it into the Top 24.

Yet with only a handful of contestants left, the judges had to start doubling up. So the two Atlanta contestants, Jordan Sasser and Kacye Haynes, had been next. And the judges’s final judgement on the matter had been to go with Jordan.

And after the judges had to make a tough call between the guys, they had to do the same with the ladies. So they had to choose between Lindita and La’Porsha. And though you could see it was killing them – they had to ultimately go with La’Porsha.

Now will La’Porsha be the one to win it? Who knows but she had promised Lindita that she was going to do her best!