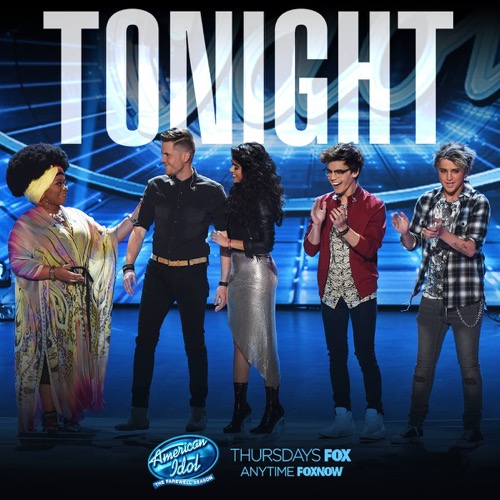 It’s another exciting night of American Idol on FOX with an all new Thursday March 24, season 15 episode 20 called “Top 4 Perform” and we have your weekly recap below. On tonight’s episode, the Top 4 finalists are revealed; the singers perform.

On the last episode, the final performance was done by La’ Porsha Renee, who blew the judges away singing “No More Drama” by Mary J Blije. Did you watch the last episode? If you missed it, we have a full and detailed recap right here for you.

On tonight’s episode as per the FOX synopsis, “as the weeks pass, the competition only gets more intense. Another finalist’s journey will end and only four will remain in the battle to become the next AMERICAN IDOL.”

Tonight’s episode of American Idol kicks off with host Ryan Seacrest taking the stage, he introduces the Idol judges Keith Urban, Jennifer Lopez, and Harry Connick Jr. After the remaining top five contestants take the stage, Ryan Seacrest reveals that rock legend Steven VanZandt has been working with the singers all week and they will be singing classic rock songs.

La’Porsha Renae is up first, for her first song she will be singing “Wanted Dead Or Alive” by Bon Jovi. After she sings, the judges let her know what they thought.

Keith: “I love when you guys take a song that you normally wouldn’t do, what was cool was you brought out the soul undertones, the blues, and the swagged. I thought it was really really good.” Jennifer: “It’s funny that out of all of the rock songs you this one. To think of you singing that is so left. So left! But, your voice is so undeniable, you could sing the phone book and it wouldn’t matter.” Harry: “Your ability of a singer transcends in every genre. You kind of remind me of Tina Turner, with a huge rock element there. You slowed down the bravado, I have never heard anyone do that, and it was on time. I liked it.”

The next singer to take the stage tonight is MacKenzie Bourg, for his first song he is singing Cheap Trick’s classic, “I Want You To Want Me.” After his performance, the Idol judges weigh in with their critiques.

Jennifer: “So I love this song, me and Harry were saying how much we love this song. You MacKenzie’d it. I loved how you MacKenzie’d it, I would have loved to hear what you did originally before your mentour made you change it. It wasn’t as exciting as I would have wanted it to be, knowing this song.” Harry: “There’s two types of groups in the world with relationship to this song. For the people who do know this song, there is a lot more energy because It is double time. There is a risk in that. I thought it was all right. I would have wanted you to sing double time. Your vocal was fine, it just wasn’t one of my favorite performances that you did.” Keith: “I hated the arrangement, I really did. When you pic a song like that, you got to do it like it was written for, or strip it way down. You were right in the middle. You’re a killer singer and you connect with the audience. I like you, I just didn’t like the arrangement.”

After a performance of “Heartbeat” from American Idol alum David Cooke, it is time to learn who the next singer is tonight that is moving on to the next round. According to America’s votes – Trent Harmon is safe tonight. That means that Sonika and Dalton are in the bottom two. For his first song Trent Harmon is singing “Sharp Dressed Man” by ZZ Top. After his performance, the Idol judges give their feedback.

Harry: “That was fungo, like what does Jennifer call it, dirty or muddy. I was so content with that groove. Here is why I thought that was brilliant, in concert you could have stretched that our for ten minutes. That was so, so smart, you satisfied so many things. That was fungo! Am I sexy when I say that?” Keith: “That was so freaking good, at this point in the competition you need a performance that stands out and that was like 10 out of 10.” Jennifer: “Trent, I have been waiting for you to have this performance. I knew it was in you. But, honestly that was what everyone was waiting for!”

After America’s votes last night, Sonika Vaid and Dalton Rapattoni are in danger of being eliminated. Ryan Seacrest announces that the people have chosen Dalton, that means that Sonika Vaid is officially eliminated. After Sonika says her goodbyes, Dalton takes the stage to sing “God Only Knows” by the Beach Boys. Afterwards, the judges give their critiques.

Keith Urban: We gotta talk quick. It was so good to choose that song. One of the things you said in the clip was you only have a minute and thirty seconds to talk to America, and that is a great attitude to have. And, when you were sitting on the steps singing, watching these girls, is as pure as it gets. That was really good.” Jennifer: “I know what it is like to have an idea in your head and to have it feel so right and have it not working. It was great that you took your mentor’s advice, because that was a really great moment for you, good job.” Dalton: “Of all the songs I have heard you sing, that was the most complex. That arrangement really showed your vulnerabilities. Fortunately, that is a song that everyone wasn’t to hear your vulnerability. It was about hearing those lyrics and I thought you did a good job with that.”

After a performance from American Idol alum Katharine McPhee, it is time for the final rounds of songs tonight.

La’Porsha Renae is up next, for her second song tonight she will be singing Sia’s popular song “Elastic Heart.”

Jennifer: “When you were singing I had a flashback towhen you first came back and you were kind of under the radar at that time. You were buying time or something, I feel like I am not even doing my job anymore. I’m just kind of watching you perform and be amazing. It’s so nice to watch, your style and your hair, and it is so beautiful to watch. You have grown during this process, and that is what it was supposed to do.” Harry: “You know what I was thinking. Have you ever been in a car with someone who just got their license and you are terrified? Well, I feel like I am in the passenger side of a NASCAR driver.” Keith: “You know it is so beautiful to see someone come in with raw natural talent, which is what you have. I didn’t know what to say, I feel like I am at an awards show and watching you sing your song.”

Up next is MacKenzie Bourg, for his Sia song he has chosen the hit “Titanium.” Afterwards, he waits to hear what the judges have to say.

Harry: “It was nice, I thought it was nice. What irritates me is when this competition turns in to an ice skating competition, and everyone is waiting for the triple axle. Sing what you want to sing, hit the note, don’t hit the note. I don’t think you should make it about that.” Keith: “I liked the fact that you just rode through that moment. I liked the fact though that you made it a singer song writer moment and stripped that song down, it was really beautiful.” Jennifer: “You know last week I told you that there is more that you can do with your voice. I don’t think life really begins until you go out of your comfort zone, and you did it a couple times in the song and it made everyone cheer, because at the end of the day we are all rooting for you.”

Now, it is Trent Harmon’s turn to sing a Sia song, he chose “Chandelier.” After his performance, the Idol judges share their thoughts.

Keith: “That was beautiful, I have to say, it is the most extraordinary thing that you guys are singing these Sia songs. That played to everything that you have so special to you, it was so strong in your vocals, I loved every minute of it.” Jennifer: “It’s funny because this is a whole different person than the guy that sang earlier, but it was both good. It’s like you can almost do anything, it’s your choice. It’s two different people, the voice is consistent, and it shows that you can kind of sing anything and you can.” Harry: “I thought that was phenomenal, that song showed a total different tale. Not to mention how artfully you sang that, that was difficult to do, from the first note to the last note I give it 100 out of 100.”

The final singer to perform tonight is Dalton Rapattoni, he sings Sia’s song “Bird Set Free.” The judges rush through their feedback because they are running out of time.

Jennifer: “you know that everybody is cheering for your bravery, it is what everyone wants to do. We all want to let go and feel good in our own skin. What that thing is that helps us do that is you singing. You touch all of our hearts everytime you get up there, but it was really beautiful tonight.” Harry: “It was the most powerful for me when you sang the line about the scream inside, I think out of all of the Sia songs – this is my favorite. Her songs are so riddled with pain, it gives singers so much to sing about. I think it was just something that you needed to do. I don’t know what it sounded like at home, but I sure liked it in here.” Keith: “Know what is awesome about you is you are up against some insane singers and you know that, but you are always pushing through your abilities, and it is inspiring. I would take an inspiring act over a solo act any day.”