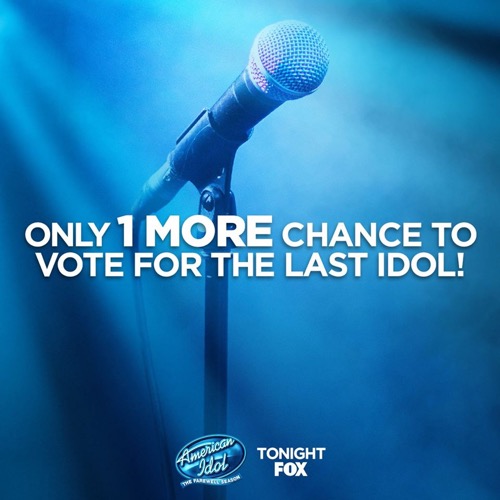 It’s another exciting night of American Idol on FOX with an all new Wednesday April 6, season 15 episode 22 called “Top 3 Perform” and we have your weekly recap below. On tonight’s episode, in Part 1 of the two-part series finale, the op 3 singers perform at the Dolby Theatre in Los Angeles.

On the last episode, week after week, each finalist had done their best to win the hearts of America. The top three contestants were revealed; Dalton Rapattoni, La’Porscha Renae and Trent Harmon. Sadly, we said goodbye to MacKenzie Bourg. Did you watch the last episode? If you missed it, we have a full and detailed recap right here for you.

On tonight’s episode as per the FOX synopsis, “after weeks of eliminations, the series’ final Top Three battle it out live from the Dolby Theatre in Los Angeles.”

Tonight’s episode of American Idol kicks off with the final three of Season 15 performing together – Dalton Rapattoni, Trent Harmon, and La’Porsha Renae. Host Ryan Seacrest takes the stage after their performance and announces that this is finale week – and in just a few episodes, the new American Idol will be crowned. The Idol judges take their seats: Keith Urban, Jennifer Lopez, and Harry Connick Jr.

Before we get to the eliminations tonight – La’Porsha, Dalton, and Trent will be singing their first songs, and then…the final two will be revealed. The first contestant to take the stage tonight is Trent Harmon. For the first round of songs, the Idols will be performing original songs that they will be recording if they are crowned the winner. Trent’s original song is called “Falling.”

There won’t be any judging for the first round of songs. Dalton Rapattoni takes the Idol stage next, he performs his original song, which is called “Strike A Match.” La’Porsha Renae is the final singer to perform an original song, she wows the audience with a song called “Battles.”

After the final three sing their original songs, it is time to learn who will be eliminated tonight. According to America’s votes – Dalton Rapattoni is officially eliminated. That means you Season 15 final two are La’Porsha Renae and Trent Harmon. Ironically, they are both Mississippi natives.

Now, it is time for another round of songs. Trent Harmon is up first, he sings a beautiful rendition of “If You Don’t Know Me By Now.”

Keith Urban: “All I want to say is that it has been extraordinary to see how far you have come. Trent, you have given La’Porsha a run for her money like I have never seen. I have to remind the fans at home at vote.” Jennifer: “I think so. I think for the first time in a long time, we actually have a battle going here. La’Porsha is so amazing, and you are showing people that you are not going to lay down and take it like that. That was amazing.” Harry: “Congratulations Trent, and I am glad you made it this far. By now, I really do feel like I know you. I thought it was a nice choice. Nice job.”

LaPorsha Renae takes the Idol stage next, Simon Fuller chose the song “Turn This House In To A Home” for her to sing tonight.

Jennifer: “That is probably one of my top five favorite songs of all time. A lot of people have done that, now we have the LaPorsha version. So beautiful baby!” Harry: “One of the greatest things about the way you sing lyrics is you never over do them. Melodically and harmonically that is the most complex piece of music you have sung all season, you spoke volumes about how much you know about harmony and combined that with a great lyric interpretation. Nice job.” Keith: “All I know is I don’t even smoke and I need a cigarette right now. It was beautiful, smoldering, you sounded so good and it was the perfect song choice. Great job!”

Now it’s time for the final round of songs, Trent and La’Porsha will be singing songs that they felt were their favorite performances of the season. Trent takes the stage first, and he sings Sia’s hit song “Chandelier” again.

Harry: “We have two great singers left in this competition. And if you were going to do anything to make this the hardest decision in the history of American Idol, you just did it. That was very strong and you should be proud of yourself.” Keith: “And for some people, you might have just made it an easy decision. That was an extraordinary performance, that was a really great thing to hear you sing that. And, that was the best song Freddy Mercury never wrote.” Jennifer: “I want to say that from the very beginning I saw something special in you Trent and I knew you would be in the final two. You couldn’t have sang that any better. You deserve to win, you do!”

For La’Porsha Renae’s encore – she chose the Rihanna song “Diamonds,” which was wildly popular the first time she performed it on Idol. Afterwards, the judges can’t even get a word in edgewise because the crowd is chanting her name.

Keith: Amazing! You guys are singing like it is the finals. The songs you guys have sung tonight are multiple black diamond runs and you sailed down the hill. Beautiful job tonight.” Jennifer: “Watching you up there singing that song, you have had so much composure throughout this whole season, I can’t wait for one day to go to a show of your’s and see you like let loose. I’m gonna be there!” Harry: “I have nothing to say about that performance I thought it was incredible.”