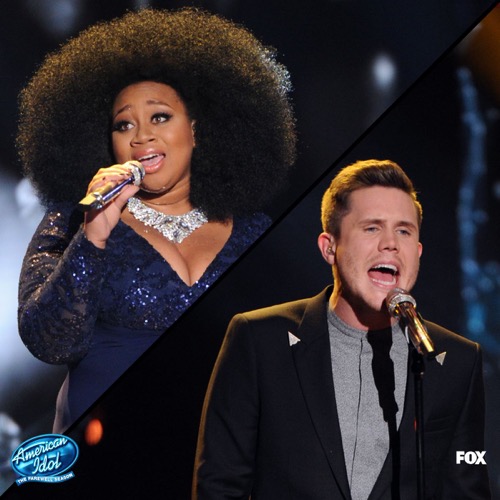 It’s another exciting night of American Idol on FOX with an all new Thursday April 7, season 15 series finale called “Winner Chosen” and we have your weekly recap below. On tonight’s episode, the winning singer is revealed in the conclusion of the two-part series finale. Included: a farewell celebration paying tribute to the contestants and the show’s fans.

On the last episode, In Part 1 of the two-part series finale, the top 3 singers performed at the Dolby Theatre in Los Angeles. By the end of the evening La’Porsha Renae and Trent Harmon were named as the final contestants.  Did you watch the last episode? If you missed it, we have a full and detailed recap right here for you.

On tonight’s episode as per the FOX synopsis, “after 15 seasons of epic performances, star power and incredible moments, the final AMERICAN IDOL will be crowned and the farewell celebration will continue, as IDOL pays tribute to the amazingly talented contestants and the millions of fans who called, tweeted, texted and championed their IDOLS throughout the series’ groundbreaking run. Don’t miss the history-making final moments of the farewell season as the last winner.”

Tonight’s season finale of American Idol kicks off with the Idols on the stage performing, the final two Trent Harmon and La’Porsha Renae are joined by the last 10 contestants that were voted off Season 15, plus a ton of other American Idol alums.

Ryan Seacrest joins them on the Idol stage and introduces the judges for the last time in Idol history – Keith Urban, Jennifer Lopez, and Harry Connick Jr. While Ryan is trying to introduce the judges, Brian Dunkleman joins him on stage for an awkward meeting. Brian teases Ryan that after tonight he will be unemployed. For those of you who don’t remember, Brian Dunkleman was Ryan’s Idol co-host on American Idol for the first season.

Now, it’s time for the final two to perform a duet together. La’Porsha Renae and Trent Harmon take the stage and sing an amazing rendition of “It Takes Two” by Marvin Gaye and Kim Weston. Afterwards, Ryan interviews the contestants. Both La’Porsha and Trent convey how nervous they are tonight.

TPTB have a ton of special performances lined up tonight for the final Idol finale – up next is former judge Kara DioGuardi (from Season 8 and 9). Kara’s performance includes a mash-up with Colton Dixon (Season 11), Jordin Sparks (Season 6), and Justin Guarini (Season 1). Season 2 alum Kimberly Locke joins Jordin on stage, along with Season 1 alum Tamyra Gray. Season 9 alum Larry Platt joins them for an interesting rap session.

Season 1 winner Kelly Clarkson is easily the Queen of American Idol – but she couldn’t be at the live show tonight because she is about to give birth and could go in to labor any moment. However, Ryan Seacrest shares a video she recorded a few weeks ago of her performing all of her most popular songs on the Idol stage to be played at the Season 15 finale.

American Idol isn’t all pop songs and R’n’B though – there have been some great rock’n’roll singers on the show throughout the last 15 seasons. Now, it’s time for the rock alums to take the stage and perform their very own, and very hardcore mash-up. Bo Bice (Season 8), Caleb Johnson (Season 13), Constantine Maroulis (Season 4), James Durbin (Season 10), and Chris Daughtry (Season 5) all take the Idol stage next for an exciting mash-up.

After a commercial break, it is time for the first Idol judge of the night to hit the Idol stage. Keith Urban has brought along a special guest for the night. He and Season 4 Idol alum Carrie Underwood perform a rendition of “Stop Draggin My Heart Around.”

Idol judge Harry Connick Jr. takes the stage next. Harry hails from New Orleans, Louisiana and he is an advocate for the communities back home facing hardships – and he works with the youth from some of the most poverty-stricken areas in New Orleans. Harry brought along a young girl from New Orleans with him named Marly Fetcher to sing “What A Wonderful World” with him.

Idol alums Katharine McPhee (Season 5), Casey James (Season 9), Carly Smithson (Season 7), Clay Aiken (Season 2), Ruben Studdard (Season 2), Amber Holcomb (Season 12), and Jessica Sanchez (Season 11) perform the next mash-up on the Idol stage. Then, Idol judge Jennifer Lopez heads up on stage to perform her new single “Ain’t Your Mama.” She is joined by a parade of dancers and purple peacock feathers, and strips down on stage for some risqué salsa dancing, 40 year old twerking, and some fireworks.

Idol loyalty takes the stage next – Fantasia, Jennifer Hudson, and Latoya London perform an emotional mash-up. The ladies are joined by George Huff (Season 3), Danny Gokey (Season 8), Elliott Yamin (Season 3), Taylor Hicks (Season 5), Joshua Ledet (Season 11), and they close with a rowdy performance of “Joy To The World” with some of the eliminated Season 15 contestants – and a slew of other familiar faces.

It wouldn’t the final Idol finale with paying tribute to some of the original Idol judges. Paula Abdul and Randy Jackson join Ryan Seacrest on stage. Paula jokes that Ryan Seacrest is the only cast member that has lasted the entire 15 years – so they brought him a gift, a huge American Idol sign. Paula jokes that her favorite part of the entire show was when she got to hit Simon.

Ryan says that Simon Cowell can’t be with them tonight – but then the crowd starts going wild, apparently Simon stopped by to surprised everyone. Of course Simon has tons of sarcastic and snarky comments. But, he thanks the audience at home for all of their support over the years, and wishes the final two Trent and La’Porsha good luck. After paying tribute to the original judges, there is one more Idol surprise for the night. Remember William Hung? The most horrible contestant ever – who’s tryout went viral? He bounces on to the stage to sing a cringe-worthy rendition of Ricky Martin’s “She Bangs.”

Trent Harmon and La’Porsha Renae join Ryan Seacrest on stage. Before he announces the winner, Season 4 alum Carrie Underwood performs one last song, her hit “Something In The Water.” Now, it’s the moment we have all been waiting for – it’s time to learn who the Season 15 winner of American Idol is. Ryan Seacrest opens the envelope and reads the results. According to America’s votes – Trent Harmon is the 2016 winner.

The 2016 winner Trent Harmon takes the stage on last time and performs his new single “Falling” – the Idol contestants join him as he celebrates, Ryan Seacrest signs off for the final time and gets emotional when he says “Good Night America … For Now.”