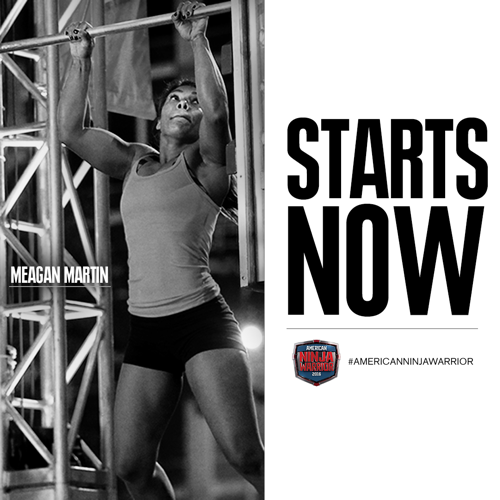 American Ninja Warrior, NBC’s obstacle course competition airs tonight with an all Monday, July 25 season 8 episode 8 called “Indianapolis Finals,” and we’ve got your American Ninja Warrior recap down below! On tonight’s episode, the top 30 competitors from Indianapolis tackle 10 obstacles, including the Salmon Ladder, Hourglass Drop, Circuit Board and Invisible Ladder.

On the last episode, “American Ninja Warrior” returned to Atlanta, Georgia where the top 30 competitors from the City Qualifier tackled an even more challenging course that included ten obstacles in the City Finals. Did you watch last week’s episode? If you missed it we have a full and detailed American Ninja Warrior recap, right here for you.

On tonight’s episode per the NBC synopsis, “American Ninja Warrior travels back to Indianapolis, Indiana where the top 30 competitors from the City Qualifier tackle an even more challenging course that includes ten obstacles in the City Finals.

In addition to the six already difficult obstacles from the Indianapolis Qualifier, contestants will face the Salmon Ladder, Hourglass Drop, Circuit Board and Invisible Ladder. Top ninjas Meagan Martin and Brian Arnold, from the famed Colorado rock climbing team “The Wolfpack,” will take on the course. The competitors will vie for a chance to compete in the Las Vegas finales, to win a cash prize of $1 million and the title of “American Ninja Warrior.”

Tonight’s Indianapolis Finals feature thirty contestants who will compete for a spot in the Vegas Finals competition.

The first competitor is Drew Knapp who, after a strong showing in the qualifying rounds, is taken out early by the Rolling Log. Next up is 5’ 1” Tyler Yamauchi: his upper body strength wowed the judges but wasn’t enough to keep him from being defeated by the second board in the Hourglass Drop.

During the break, three more competitors attempted the fierce obstacle course: Zack Kemmerer failed to complete the first obstacle, Kevin Hogan splashed down after slipping from the Rolling Log and Alex Bienz was defeated by the Fly Wheels.

The next Vegas hopeful is Eric Middleton who makes it up the Warped Wall but fails to complete the Hourglass Drop. Dr. John Murray Adams is the next competitor to attempt the course and is again taken down by the Swinging Spikes.

Next up is P.J. Granger who falls off the landing pad after the Disc Runner obstacle. During the break, Bryce Foley fell off the Fly Wheels, Fred Thorne lost his grip on the Swinging Spikes and Tyler Smith made it all the way to the Hourglass Drop before failing. Up next is Andrew “Roo” Yori who makes it up the Warped Wall but cannot complete the Hourglass Drop. At

At break, three more competitors attempted to gain a spot in the Vegas Finals: Ben Jackson and Dan Banura were defeated by the Hourglass Drop while Dan Yager failed to complete the Rolling Log obstacle. The next competitor to attempt the course is Ethan Swanson who, after making it the farthest than anyone in tonight’s competition, loses his grip mere feet away from the top of the Invisible Ladder.

Up next is Ian Dory who becomes the first to successfully complete the entire course. During the break, two more competitors attempted the course: Jonathan Cooley was defeated by the Swinging Spikes and Brandon Mears splashed down during the Salmon Ladder. Tonight’s next competitor is Dan Polizzi who after a strong run is taken down by the Circuit Board, but still qualifies for the Vegas finals. Fan-favorite Meagan Martin becomes the third woman ever to make it to the Vegas Finals but wipes out on the Circuit Board.

During the break, Adam Stroup was eliminated by the Fly Wheels, Andrew Harada Rowland failed to make it to the start of the Hourglass Drop and Ryan Elliott wiped out on the Circuit Board. The next competitor to try their luck is Brian Arnold who becomes the second competitor tonight to complete the course.