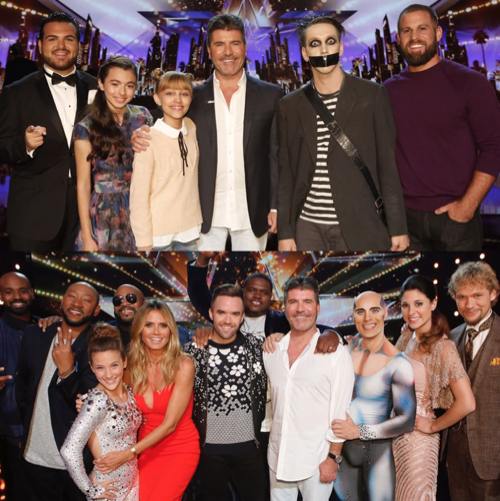 Tonight on NBC America’s Got Talent ends its season with an all-new Wednesday, September 14, 2016, episode and we have your America’s Got Talent recap below!  On tonight’s AGT finale episode, the winning act is revealed in the Season 11 finale, which features special guests and surprises.

Did you watch last night’s episode where the top ten finalists performed one last time for the chance to win the AGT crown and $1 million dollar prize?  If you missed it don’t worry we have you covered with a full & detailed America’s Got Talent recap of last night’s episode, right here!

On tonight’s America’s Got Talent episode as per the NBC synopsis, “Host Nick Cannon reveals who America chose as the $1 million winner of “America’s Got Talent.” This two-hour season finale will feature special guest performers and not-to-be-missed surprises. Starring Mel B, Simon Cowell, Heidi Klum and Howie Mandel.

Make sure to bookmark this spot and come back later for our America’s Got Talent finale recap from 8PM – 10PM ET! Refresh often so you get the most current info! While you wait for the episode head over and check out all our AGT spoilers, news, recaps & more!

Breaking right into special guest performances, Sal teamed up with the Jersey Boys to sing What a Night. The gang danced together while Sal took the lead on vocals.

Next, the judges talk about their entrances. Howie hates coming out while Mel enjoys it. Howie makes fun of Simon for taking his time when he makes his entrance.

All the male contestants come on stage with Tape Face taking the lead, maneuvering the guys in sitting positions while Lean on Me plays. He slowly makes the rounds, pulling their chairs out from under them. They continue to stay connected and in the air, leaning on one another. Tape face then takes a selfie before putting the chairs back under them.

A sneak peek of Miss Peregrine’s Home for Peculiar Children is shown.

Brian Justin Crum performed Creep. Putting his own spin on the well-known song. The judges put together a reel of some of Nick Cannon’s best and worst moments over the course of this season. Mel calls him the glue that holds the show together. Howie commends him for putting time and effort in. Heidi loves that Nick is up for anything. Simon thinks that Nick really wants to be a contestant!

Three of the acts, Sofie, Viktor and Laura perform with a pop opera of 3 tenors. Nick and Mel then try to teach Howie to dance. Howie doesn’t want to dance with them, he doesn’t want to make them feel bad. Simon tells a tale of how Howie was in the Russian ballet until an accident ruined his career! Paula Abdul makes an appearance to talk about how she met Howie, at Studio 54.

It’s Simon’s turn. A reel of his biggest bloopers and funniest moments are played. From his harshest moments to the funniest reactions. We also get to see some of Mel and Heidi’s reactions and their past participation over the season on the stage with some of the contestants.

Grace Vanderwaal takes the stage to sing an original song that became a hit overnight. She gets the crowd going with her unique voice and insane ukulele talents. She introduces Stevie Nicks to the stage. The legendary Nicks sings her popular song Landslide.

Season 6 Silhouettes return to perform with Linkin’ Bridge, singing the song 7 Years. The Clairvoyants take the stage to show off their psychic abilities with the help of Paula Abdul. Abdul writes down a number with the judges also giving their own numbers. The Clairvoyants have Paula pull a ticket out of the box. All of the numbers they collected are on the board. The crowd is impressed.

John comes out next and uses Paula as his assistant for a run of card tricks. He makes cards disappear. Paula is dumbfounded by his trick.

Nick begins breaking down the Top 5, calling Sal and Tape Face forward. Sal makes it while Tape Face is sent home. Linkin’ Bridge and John are asked to step forward. John takes the lead and heads into the Top 5. Grace and Sofie are called forward. Grace takes a spot in the Top 5. Viktor and The Clairvoyants are called on.

The Clairvoyants win the next spot. Down to one spot left, Nick calls Laura and Brian forward. Brian takes the last spot.

Nick makes the announcement of the 2 acts to be eliminated. Sal is the first to go. He is positive about his elimination, announcing that AGT is the greatest show. Heidi tells him that she is his biggest fan. With four acts remaining, Nick continues on with the elimination. Brian Justin Crum is the next to leave the show. He remains upbeat with some words of wisdom from Mel. The next act to go home is…..John. Howie looks truly upset over his loss.

Down to just 2 acts, The Clairvoyants and Grace Vanderwaal, we see Grace when she first appeared on the show. We also see The Clairvoyants and the beginning of their journey on AGT. It’s down to the biggest moment of the season and the night. The winner is….Grace Vanderwaal! She’s overcome by emotion with the judges standing and the crowd going wild. Howie calls her a shooting star!