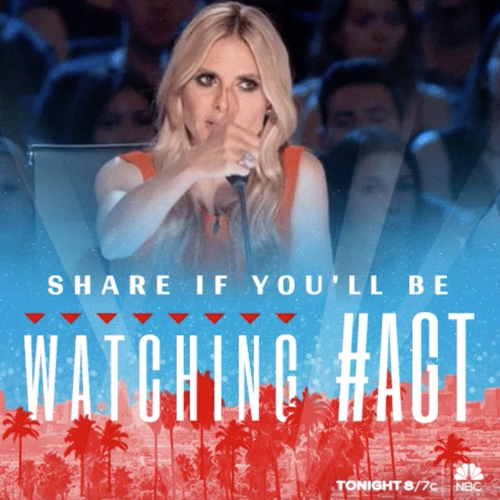 On the last America’s Got Talent recap, season 11 of America’s Got continued with its second part of auditions. Judges were Howie Mandel, Heidi Klum, Mel B and the show’s 11th season was highlighted by new judge Simon Cowell, who created the “Got Talent” format that first launched with “AGT” in 2006. It is now the most successful TV format of all time. Did you watch the last episode?  If you missed it we have a full and detailed recap, right here for you.

We will be live blogging America’s Got Talent recap. So make sure to come back to this spot and watch the show with us. Make sure to refresh often so you get the most current info! While you wait for the episode let us know what you think of the show!

#AmericasGotTalent starts with the judges testing their X buttons. Nick Cannon calls Simon “Sir Cowell” in a nod to the knighthood news. First up is an act that wants to be the American Spice Girls – they call themselves Good Girl.

They love Mel B and are excited to bring the girl power. Howie is on his feet as they finish their En Vogue cover and the audience digs them. Simon refuses to stand. Mel B says they are already tight and says it was flawless and she enjoyed it.

Heidi says they are fantastic and she loves their look, voices and attitude. Howie says they are great. Simon says he likes them and it’s a bit copycat and he gets booed. He says the market needs an act like them but they need to be quirky. They get a chorus of yes.

Next up is a dance troupe made of five seniors called the John Rothman Dancers. The ladies seem to be background for John as they dance to Boogie Woogie Bugle Boy. Heidi says she enjoyed it. Simon says it reminds him of Cocoon, the movie.

Next up is Diane Barnard who is back to try again – she was on #AGT two years ago and says she’s learned a lot since then. She has a hula hoop and twirls it while Beethoven’s 5th plays. Simon isn’t even watching. Howie applauds. Simon gives her the X.

Mel B adds hers too. Simon says it was boring and pointless and says he thought she was fighting with the hoop. Nick comes out and says it’s a duo. They start hula hooping together and then Nick hustles her off the stage. Heidi takes the stage and does it too.

Next is the Russian Bar Trio and they were on AGT back in Season 3 but Christine got hurt and they had to drop out of the competition. They start their act and she has a hoop and then hops on the bar. She does amazing aerial acrobatics.

Simon says it was a triumph. Howie says it’s a big yes from him. Mel B says yes too. Heidi says she’s excited and gives a definite yes and Simon gives them a fourth.

Next is 12-year old Kadie Lynn Roberson from a tiny town in Texas. She sings Twinkle Twinkle Lucky Star by Merle Haggard and massacres it. WOW. The crowd is all on their feet for Kadie. Mel B says she’s like a little cute thing with this big powerful voice.

She says she has great technical control and calls it a home run. Howie says it sounded like she knew about love when she sang it. Heidi says she was very impressed and says she has such power and confidence.

Simon says these shows are like mining for talent and then you find a little diamond – like her. Simon says he’s so impressed and says she has a cool confidence and her voice is so mature, so real and in a few years, we’ll look back at the moment they discovered her. It’s four yesses of course.

Next is an act that’s big and dangerous so they have to go outside – it’s Duo Guerrero and they have a tightrope act. They climb up to the tightrope and they both step onto it. It’s very windy. The wife slides down into a split.

Her husband jumps over her head. It’s crazy dangerous. She stands on a chair on the tightrope. Her husband climbs up onto her back. He stands up on her shoulders. Whoa. Then she starts walking! Back inside, the crowd cheers loudly for them.

Howie says he was more terrified than ever. Simon says it was amazing and says they’re not spring chickens so to do that, it was extraordinary. Mel B says it was breathtaking and can’t believe she had him on her shoulders. They get four yesses.

Next up is a large singing group called One Voice from Memphis, Tennessee. They sing a cappella and are all in high school together. They sing Half the Man by Rozzi Crane. The crowd adores them. Simon says he didn’t like it – the crowd boos – he says he loved it.

He says there are some good singers in there and loves them. Heidi says the main vocalist was fantastic and she wants to hear more. Mel B says she could hear all 12 parts and loved it. One of them does a promposal. Howie gives them a standing O.

Mel B says she feels great and Howie says they’re amazing and now wants to go the prom. Simon says 100% yes. Heidi and the others all offer yesses. They get four and will move on.

Now it’s time for some comedians. Josh does stand up. He’s pretty good and gets yesses. Al is next and he gets yesses too. Kid comedian Lori Mae Hernandez is 13 and takes on the judges. She started doing comedy when her dad got sick to make him smile.

She cracks a Trump joke and gets a standing O from Howie. Simon says she’s really funny and naughty and he really likes her. He says she could be the next Tina Fey. Heidi loves that she writes her own jokes. Mel B says she’s got it and calls it brilliant.

Howie says he was shy as a kid at her age. He says the stuff he got expelled and punished for is what he gets paid for now. He calls her a gift and an inspiration. She gets four yesses and will move on to the next stage.

Next up is Pat with her Chihuahua Dolly and she says her dog sings. The dog is 13, Pat is much older. She sings and the dog chimes in. She gets X’d fast. Simon say the dog was screaming not singing and says shut up.

Now we’ve got a guy with a chicken puppet suit and Simon X’s him fast. Simon puts his fingers in his ears and the X’s rack up and he’s out of there. Simon asks what it was. He says it was even worse than he thought it was going to be. Mel B calls him a dream crusher.

Next is Step’s Junk Funk – they use junk items to play music. They perform with teapots. The crowd boos and the X’s pile up again. Simon is annoyed. He says it’s one of the worst things he’s heard in his life and says no thanks.

Then we’ve got a pair of opera singers that makes him want to gouge out his eyes. He says it was like a punch. Next is Miranda Cunha. She asks Simon to come to the stage. He goes up reluctantly. She kisses him on both cheeks and he smiles.

She sits him in a chair and then dances around whipping veils around. It’s like a chair dance. She wiggles her boobs in his face. Then she sings – he wants them to press the buzzer but the other judges refuse. He begs. She gives him a big kiss on the mouth.

All three of the others give her a yes so they can see her do it to Simon again later. He says he will remember that.

Next up is a guy named Victor who is in a leotard that looks like a human body. He’s a juggler. Viktor Kee starts with one ball and then others fall from above. He juggles so fast it’s a blur. Howie and Heidi are both on their feet clapping for him.

It was lyrical and amazing. Heidi says it was really special and a treat watching it. Heidi says she loved it. Mel B says it was like an alien come to life and it was intense and she couldn’t look away and calls it flawless.

Simon says normally he hates jugglers but this was like The Termination or something and says it was like an Olympic sport. He says it was extraordinary. Howie says it was beautiful, unique and original. He gets the four yesses.

Next is Sal Valentinetti. He says he loves Dean Martin thanks to his grandmother. He says his mother is everything to him. He does Sinatra’s My Way. The crowd loves him. He gets the only standing ovation of all four judges.

Simon says you can’t fake that kind of music and calls him an old soul. Simon says his grandmother is looking down on him now. Heidi says she wants to give him a big smooch. Sal comes down to her. Mel B says it was flawless to her.

Heidi says she loves the way he talks. He goes back to the stage and asks Howie how he’s feeling. Howie says he’s a lovable guy who has a real talent. Howie says it’s a yes for him. Mel B says yes. Heidi slaps her golden buzzer. He’s stunned.

Heidi comes up on stage to hug and kiss him. His cousin Big Tommy comes out with Nick who says he’s going straight through to the live shows.