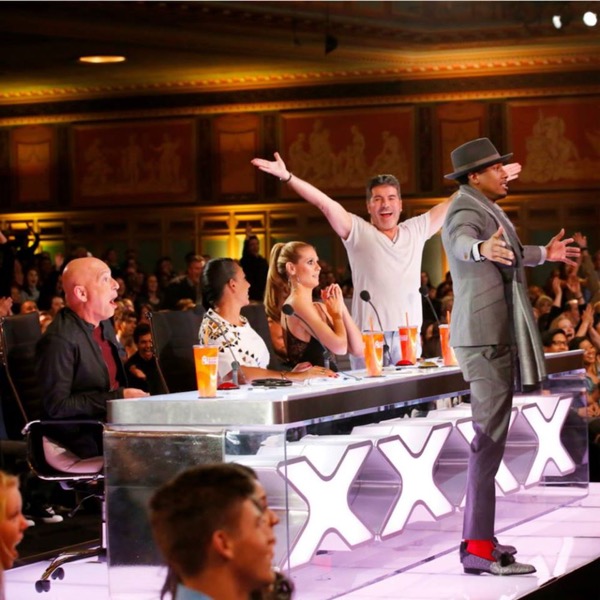 Tonight on NBC America’s Got Talent returns with an all new Tuesday, June 7, Season 11 episode 2 called “Auditions,” and we’ve got your recap down below! On tonight’s episode auditions continue. The judges are Simon Cowell, Howie Mandel, Heidi Klum and Mel B.

On the last episode, season 11 of America’s Got Talent premiered with auditions. Judges were Howie Mandel, Heidi Klum, Mel B and the show’s 11th season was highlighted by new judge Simon Cowell, who created the “Got Talent” format that first launched with “AGT” in 2006. It is now the most successful TV format of all time. Did you miss last week’s episode?  If you did you can see a full and detailed recap, right here.

#AGT starts with Nick Cannon teasing the judges and Heidi Klum saying this is the best show on television. First up is mother-son ballroom dancing team Daniel and Alla. Simon says he’s never seen a mum and sun dance.

They perform to Moves Like Jagger and they are amazing and the audience totally digs them. Alla even flips her son. The crowd is on their feet for an ovation – very cute act. Howie says he always begged his mom to dance with him.

Mel B says mum is great but Daniel commands attention. Simon says they’ve never had an act like this before on the show and all four vote yes. Simon jokes that he thinks Alla shrunk her husband down to dance with her.

Jonathan Nosan is next and the successful businessman does a contortion act. He’s amazingly bendy. The audience loves him and everyone is on their feet including all the judges except Simon. Howie asks how you do that.

Jonathan says he’s been training for this since he was 24 and Howie says he’s amazing. Heidi says it was weird, beautiful, fluid and amazing. Simon calls it fantastically weird and says it reminds him of an insect documentary.

Simon says he’s very memorable. Mel B says women usually do contortion in sparkly sexy outfits and says she loved it. Howie, Heidi, and Mel B vote yes. Simon asks what will you do next and then also votes yes. That puts him through.

Musicality is next and they are a choir from a rough area of Chicago. They take the stage and Simon greets them. Their teacher says they have to rehearse in a school stairwell. They perform and the crowd adores them and rewards them with a major standing o.

Howie says it was melodic and beautiful. Mel B says she likes when they all sang together and gave her chills. Heidi says it was smart to sing 1D and says choirs can be boring but they blew her mind. Simon says he heard nerves at the start.

Then he says when they hit the middle, he got what they were about. He says what they do is important and says great things can happen and says they’re hard workers. Simon then compliments their teacher Michael. They get a four judge yes.

The next act is Florence and Olga and they are ballerinas from France. They do a number where they abuse each other then it breaks into an absolute cat fight. Mel B says it brings back Spice Girls memories. They get a no. Then we see a montage of no’s.

Next is 63-year old laughter coach named Tita from Seattle. She does a penguin imitation and cackles. Then she has them do other laughs. She gets four x’s and Simon asks if she was drinking. Heidi says it was too much and Howie lurks laughing and coughing.

Simon gives her a no but called her a sweetheart. She goes off laughing with Nick. Simon then asks what the hell that was.

Ryan, her hubby, adopted Jaslyn and they are now a happy family. Simon says she can prove that those people made a mistake. They call the Edgar Family Band and sing The Pretenders’ I’ll Stand By You. They are amazing and the crowd is on their feet cheering.

The cheering doesn’t stop and the crowd chants. Mel B says Nikki has an incredibly soulful voice. Heidi says she loves the way they harmonized. Howie says the story is common and it’s tough but she gave birth to a second chance.

Simon says it takes guts to get yourself together like this and calls her unique and real and says he loves her voice. He says they have a special energy together. All of the judges give them a yes and they cheer them and tell them they’ll see them in the next round.

Next is an older daredevil hand balancer named Gary Sladek, the Amazing Sladek. He says no one in America does what he does at his age and probably shouldn’t be doing it, but it’s his passion. He starts on a stand and balances chairs and climbs up.

He then balances atop a stack of them. He gets so high up, he’s between the judges’ name signs up high. The crowd is up on their feet cheering and clapping as he finishes. Heidi is on her feet applauding. Simon asks if it’s ever gone wrong and Gary says no.

Heidi says the only advice she has is the outfit and says it’s not working. Mel B says she was on the edge of her seat and Howie jokes that Gary was too. She calls it brilliant. Howie says it’s a wonderful combination of Americana. He gets four yesses.

The next act is a group of Argentinian guys called Malevo. They do a rhythmic drumming and tap thing. Their footwork is insanely fast – it’s like Lord of the Dance gone Spanish on speed! Then they start cracking whips.

The crowd loves them. Simon says it was incredible and says this could be like Riverdance part two. Mel B says she loved it and how manly they are. Heidi say they look hot and it was very exciting. Howie says it’s hard to impress them and they were all impressed. It’s four yesses.

Danny Palumbo is next and he’s a comedian. Simon this him with an x and the crowd boos. The crowd boos and calls for x’s. Howie says when it’s going badly, you have to play into it and says you can’t let it throw you, you need to work with it.

Simon says it’s a game and he didn’t go it and just chalk it up to experience. They tell him sorry and Simon says it was painful. The other comic backstage is terribly nervous after that. DJ Demers comes out and says he wears hearing aids and is from Canada so he has two disabilities.

DJ has profound hearing loss and says comedy helped him cope with his disability. Mel B asks if he’s gay and he says no but my boyfriend is then says no he’s not either, we’re just having a good time. The crowd loves that.

Howie says he likes that he found humor in his reality and he’s his favorite comic this season. Mel B says he gave her more than a belly laugh. Heidi says it was hilarious. Simon likes him too and they all vote yes for DJ.

82-year old singer John Hetlinger is next. He sings Let the Bodies Hit the Floor by Drowning Pool. OMG. The old dude raged. The audience loved him and went wild. Howie gives him a standing ovation and asks if there’s a mosh pit where he works.

We see a crazy karate kid doing moves. He gets yesses because Simon says he’s scared he’ll beat him up. Tina Simone kills with Knock on Wood and also gets yesses. Then we see a weight lifter who does the splits on chairs. He calls Heidi up and dead lifts her while he does a split. He gets yesses too.

Next is dance troupe Eleven Play. They are dancing with drones right above them. Heidi and Howie are both up on their feet applauding. Then the drone pilots come out on stage and they talk to the Japanese troupe.

Simon says this is amazing and says the girls are good and this could be incredible going forward. Heidi says she thought she was on a different planet. Mel B says it was absolutely beautiful. Howie says he likes the way geeky tech guys found a way to hang out with pretty girls and they get four yesses.

12-year-old singer Grace VanderWaal is up next. She plays a tiny guitar and sings a song she wrote and brings down the house. Simon gets up for the first time tonight. Everyone but Mel B stood up. The crowd is in love with her.

Howie says she’s a living beautiful miracle. He says she’s so original. He says the world will know her name. Howie slaps his #goldenbuzzer for her. He goes up on stage to hug her. Simon says he just changed her life. Grace says it’s like a dream. She’s straight through to the live shows.