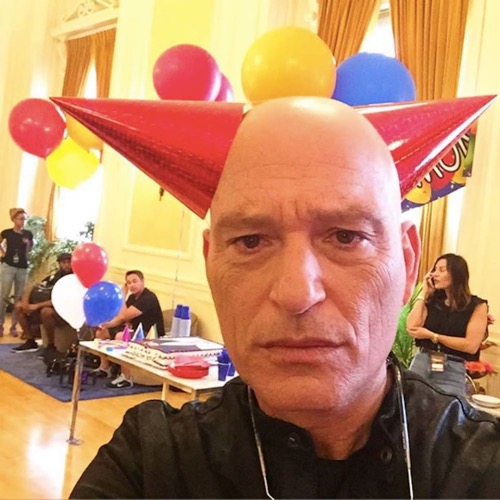 On tonight’s episode as per the NBC synopsis, “the auditions continue with creator and executive producer Simon Cowell at the judges table alongside Heidi Klum, Mel B, Howie Mandel and host, Nick Cannon. Variety acts of all types and contestants of all ages audition for the chance to win the $1 million prize.”

#AmericasGotTalent starts with Alfredo and Anna Silva, a married knife throwing act. Alfredo admits he’s hit her twice and Simon asks if it’s dangerous. He says he can kill his wife. The first set of throws is pretty standard.

Then she starts swaying back and forth and he throws around her. Then he starts throwing burning knives. The crowd loves it and Heidi gives a standing ovation. Mel B says it was frightening but entertaining. Howie says they’ve seen a lot of knife throwers.

But he says they were amazing. Heidi says it was thrilling. Simon asks if it will get more dangerous if they move forward. Anna says why not. They get four yesses and will move to the next round. They hug and leave happy.

A set of twin boys come out – Elias and Zion – and they’re nine. They sit down and start playing keyboards together. Elias plays Flight of the Bumblebee. Then Zion starts playing something wild. Then they combine the two songs.

They bring down the house and get a standing ovation and Howie is on his feet too. Mel B asks if he missed a few notes and he says it’s the best he’s done. Heidi says they’re extremely talented and she’s impressed. They get four yesses.

We see a family of kids including DJ Livia and the others dance while the youngest spins. Simon says they’re the coolest family in the world. They also get four yesses. Parker, a 12 year old dancer is next and he just flies. He also gets four yesses.

High-schooler Axel Perez is next and he does a wild balancing act. He also gets four yesses and promises to bring more danger in the next stage.

The next act did U2’s Everybody Wants to Rule The World – they’re an orchestra with a choir and it was mesmerizing. Cinematic Pop also gets four yesses. 14-year-old singer Jayna Brown is next and she talks about how much she looks up to her mom.

She sings Summertime, the classic from Porgy and Bess. She kills it and Heidi and Mel B give her a standing O. The crowd won’t stop cheering. Mel B says her voice is so mature. Howie compliments her and then Simon says he loved it.

Simon says he likes that she has an interest in artists of the past. He says he loves her voice, confidence and says it was one of his favorite auditions. She gets four big yesses and runs over to hug her mom happily.

Next is Sos and Victoria who have been married 20 years. They do a dance and quick change artist act. It’s pretty impressive. It’s so fast and you can’t tell how they do it. It’s amazing really. The finale is a “holy crap” moment.

Heidi and Mel B are on their feet for them. Mel B says it was brilliant and entertaining. Howie says it was beautiful, quick and says he never has to ask if she’s ready yet. Simon says it was quick, slick and fantastic and he has no idea how they did it. They get four yesses.

Next is Jon Dorenbos is a Philadelphia Eagles NFL pro who does magic. He says the other players trash talk him and tease him over it. Jon goes up and does a card trick with Heidi – it’s up-close magic and it’s good. The crowd loves him.

Simon is stunned and says he doesn’t know how the hell he did it. He says it never moved and says it was so slick, fast and his dialog was great. Heidi says she loved it and he was so charming. Mel B says she can’t get over it.

Howie says he has the gift of making magic happen and calls it an amazing moment. Howie gives a yes and the others follow quickly with yesses. Jon is pleased and walks off shuffling his cards.

Vello from Estonia is an acrobatic teacher. He does contortion and balancing. He even climbs a rope while all twisted up then hangs from his mouth. He gets a standing ovation. Simon says he’s fantastically nuts and he likes him and says he’s like an acrobatic Borat.

Heidi says the hopping was awesome and it was very impressive. Mel B calls him wonderfully crazy. They get four yesses and Heidi says she wants to see them again. Simon says he also gets a yes from him and wants him to be in this to win this.

Now some more rejections. First a singing group then a guy singing solo. Then there’s a country artist named Danielle and Simon says she had many moments that weren’t great. Ronee Martin is next and the singer is 62 and flirts with Simon.

Ronee sings Bonnie Raitt’s I Can’t Make You Love Me. Simon stops her mid-performance and the crowd groans. He says the song wasn’t right for her. He asks her to do another song. She does Natural Woman. She slays from the first note and the crowd goes insane.

Mel B says that song really showcased her talent and thanks her for it. Howie says it was beautiful and spectacular. Heidi says the first song would have earned a no. She says the second song transformed her into something amazing.

Simon says Ronee has an amazing voice and fantastic personality and needs to become relevant and current. He says this show gives people like her a chance that other shows might not. Howie says yes, and so do the others. She’ll move on and is thrilled and gets a standing O.

Guys doing a hand farting and kazoo act get a no as does a woman playing a metal belly board. A guy does a bad fire act and then a balloon artist flops. A chick with horrible fingernails is sent away. Then we see The Baron of the Universe.

Mika starts his act as The Lion Sleeps Tonight plays. He shoves a hook through his nose and lifts a weight. He gets an X from Heidi and Mel B turns her chair around. Then he sticks stuff to his eyes and Simon turns his back. Nick is screaming stop.

The audience is covering their eyes and then he moves onto his nipples. Simon watches through his fingers. It’s horrifying. The Baron takes a bow. Simon says that made his nipples hurt. Heidi asks if he likes doing it and he says yes.

Mel B says she gets what he’s doing but it’s not her thing. Simon says there’s something about him like when he watched horror movies from behind the sofa as a kid and calls him fantastically sick. Heidi says no, Mel B says she loves it and gives a yes. Howie says yes and Simon gives a yes too.

Next up is 62-year old comedian Julia Scotti. The judges crack age jokes and Mel B comes at Simon hard. She’s brutal and hilarious. Howie stands up for her and she gets a standing O from the crowd too. Heidi says she loves that she’s naughty and really made her laugh.

Howie says she’s a joy and has so much to offer. He asks why she started late in life. She says she became a teacher and then he asks for more. Julia says she was a man for the first 28 years of her life. Howie says man or woman, she’s human and funny and talented and brave.

Mel B says she’s my kind of girl and completely inappropriate. Simon says she’s a piece of work and then goes into her routine and it’s like whoa. He says the surprises with her are never ending. He says she’s edgy and interesting. They vote. She gets four yesses.

Next is Caly Bevier who’s a 16-year old singer. Howie compliments her hair and she says it’s short because she’s a stage three ovarian cancer survivor. She says singing makes her happy and on August 28 last year, she found out she was in remission after a lot of treatments.

She sings Rachel Platten’s Fight Song. The audience are all on their feet. All four of the judges give her a standing O and so does the crowd. Howie says she’s already gone through obstacles and it was so inspirational and thanks her.

Mel B says her tone and the way she fell off the notes was on point. Heidi says her voice is beautiful and she can’t believe she’s only 16. Simon says he loves everything about her. He says he just had this feeling when she walked out.

Simon says her choice of song, voice and spirit makes her really special. Simon says everyone felt it and says he heard the nerves but he predicts great things for her. Simon slaps his golden buzzer for Calysta. Simon goes onstage to hug her and meet her mom.