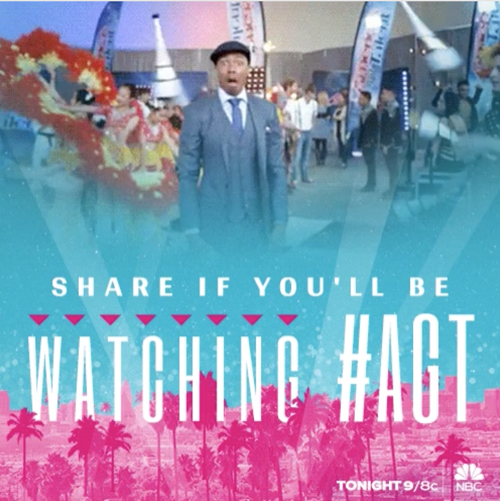 #AmericasGotTalent starts with Nick introducing the judges Heidi Klum, Simon Cowell, Howie Mandel, and Mel B. First up is Ryan Bearden who is 18 and he’s singing Ladies Man which is ironic since he says he was home-schooled and has never had a GF.

He plays piano and sings. His piano skills are on fleek and his voice is nice too but and it has comedic ad libs. He gets a standing O for his funny song that ended with “don’t go to prom with your mom.” Howie says it was funny and he scored well.

Mel B says he’s sweet, charming and funny and she loved it. Heidi says she loved it and would like to hear more. Simon says he likes that he’s smart and he’ll remember that audition. He gets four yesses. Ryan will move on to the next round.

It’s time for some magic

Next is Namcini, a trans magician, who’s real name is Joe. He does some fierce magic. Simon gives him an X and says he’s like a child with a magic kit. He’s sent off with no love. There’s another failed magician who is sent off.

Next is Lee Hoax who is in an escape artist and is in a straitjacket. Simon gives him and X and so does Heidi. Kid magician Kadan Rockett and his sister assistant Nicole Rocket. He loads her into a box that says he’s going to make her a princess.

Then he flips the sign that says he will cut her into pieces and uses a chainsaw on the box. He pulls off the box and we see half her body on one side nad her legs on the other. He tickles her feet. The audience loves it. Very cute. Heidi asks now what as they wheel her offstage in half.

Heidi says will you put her back together and Kadan says if you bring me back for the next round. Simon remarks how happy he was to cut his sister in half. Howie likes it. Mel B says she loves them. They get four yesses and will move on to the next round.

There’s an act with a guy who got Mel B to put her hand into a sack with a snake. There’s a dog act, one with ducks, and Simon and Howie both have their dogs backstage. Next is Pato with his dog Ginger who says she’s his sister and best friend.

He rescued her three and a half years ago. He struggled with OCD before he had her. He says when he performs with Ginger, he feels human and his anxiety is gone. Pato sits Ginger down and she starts by balancing in a bowl and they jump rope together.

She rides a scooter and then she dances. Then she walks a tightrope. Then she does flips. The audience loves it and Heidi is on her feet for a standing O with Mel B. Simon says amazing. Mel B says it made her happy inside and the dog is happy too.

Heidi says his dog is unbelievable and she loved it. Howie says the rope balancing is something they haven’t seen. He says it was new and exciting. Simon asks if the dog is real and if it’s someone in a dog suit and says they’re incredible. He gets four yesses.

Gerat singers and a clown montage that terrifies Simon

Next up is a husband and wife singers RAII and Whitney Smith. They kill their song and Howie says it’s a great throwback act – they have a Motown vibe. Simon says in the middle, they both let rip and says they can really sing and he likes them a lot. They get four yesses too.

Next is a clown and Simon says he hates clowns. One is a cat clown and Simon x’s him fast followed by Heidi and Mel B. He’s out of there. Simon and Howie talk about how Simon is genuinely scared of clowns then there’s a weird harlequin act that Simon x’s.

Richie the Barber is next and Simon is freaked and closes his eyes. Howie says Simon has a fear of clowns and Richie says he’s blue though. He’s been doing this for three years and it’s tattoos not makeup. Richie has wanted to be a clown since he was 10.

Howie says he’s the only real clown they’ve ever had and Simon says just do what he’s going to do. He starts with juggling and signs about it and raps. Simon x’s him and so does Mel B. His rap is off time and Mel B x’s him too then the crowd joins in.

Simon says he does scare him and Mel B says he’s nuts but she likes his enthusiasm. He gets a yes from Howie. The other three are emphatic no’s.

A couple soars their way to the next round

Next up is Ani and Andre who call themselves ThroWings Duo. They climb u high on a stand and then he tosses her around like he’s her trapeze. The crowd is on their feet cheering as they do an insane sideways flip. Howie says he loved it and they get a standing O from the crowd.

Next up is an extreme eater and he has a dog food burger with a beef bile dip. Everyone cringes. Howie, Simon and Heidi all x him. Simon says it’s not an act. Next is a guy who paints with his tongue. The crowd boos and he shows a bad painting and gets hit by lots of x’s.

Then we see a sword swallower named Dan Meyer. He punctured his stomach once and his esophagus and last year tried to do 29 swords at once and messed up his throat. He says he’s attempting something tonight he’s not done before.

Dan swallows one sword. He pulls it back out and the crowd cheers. He did it hands-free. Then he pulls out a car axle that weight about eight pounds. Simon has turned away. Then Dan says he’s doing an entire car and calls Nick out.

Dan has a sword and they pull out a car. He’s going to pull the car across the stage just using the sword he swallowed. He tells Nick to get into the car and steer but don’t hit the brake. He swallows the sword. Then he starts walking with the straps on the car.

The car starts moving and he takes it across the stage. The crowd loves it. Nick calls him crazy. Mel B says she couldn’t stop looking and asks if it hurts. Howie says this is something they haven’t seen before. Heidi says it was impressive. Simon says he’s nuts but it was incredible. Four yesses.

Singers and dancers and jugglers, oh my

Next is a dance group from South Carolina. They tap and step. They were good. One of the girls is a hug fan of Howie’s and he goes up and gives her a hug. Simon asks why she is. They get four yesses and move on to the next round.

Trish and Bob are sword throwers, sword jugglers, and an all-around dangerous circus-type act. They got lots of judge love and will move forward. Brenley Brown comes out to sing a country sing and brings down the house. She gets four yesses too.

Bending over backwards to get a yes

Next is Sofie Dossi who’s 14 and does hand balancing and contortion. She says she saw a video and fell in love with it. She does her act and is really good. She bends in half and picks up and apple with her feet and puts it in her mouth.

She does an amazing job and then goes onto the floor for some acrobatics and contortion. Nick hands her a crossbow and she gets back onto the balancing blocks and uses her feet to fire the crossbow. The crowd loves it and Heidi and Howie are on their feet for a standing O.

Heidi says she loved all of it and says it’s cute and weird. Howie says she’s amazing and exciting and asks if he’s boneless. Simon says she’s from another planet and put on a great act. Mel B says she has great stage presence and is like a seasoned pro. She gets four yesses.

We see a guy’s dance group called the Brat Pack and they get yesses. Then we see a double dutch dance and jump rope group that gets through to the next round. Then we see Christopher who says he wanted t be part of a music group but didn’t find anyone.

He’s dressed in a Native American get up. He steps back offstage then comes back on with a rack of life-sized human puppets attached to him. They are done up as the Village People and dance to YMCA. Even Simon is laughing and smiling.

The crowd loves him and even Simon is clapping. Mel B and Howie are on their feet. Howie says he loved it and Christopher says if he comes back, it will top this. Mel B says she was gobsmacked and didn’t know where to look. Mel B says she loves the act. Simon says it was fantastic. He gets four yesses.

Queen cover brings down the house

Now it’s the last act of the night. Brian Justin Crum is a singer and he gives a shout to his mom. He was bullied growing up for being gay and overweight growing up. He says his mom was always there for him. Brian sings Queen’s Somebody to Love.

The crowd is on their feet and Howie stands then the other three judges. Mel B says wow and Howie says he found everybody to love tonight. Mel B says they took us to church and back. Heidi says he just showed all those who bullied him and it was great.

Simon says every ounce of him came out and he’s a fantastic singer. Mel B calls for the vote and he gets four enthusiastic yesses. He closed down the show with thunderous applause – the crowd loves him and then he runs to hug his mom.