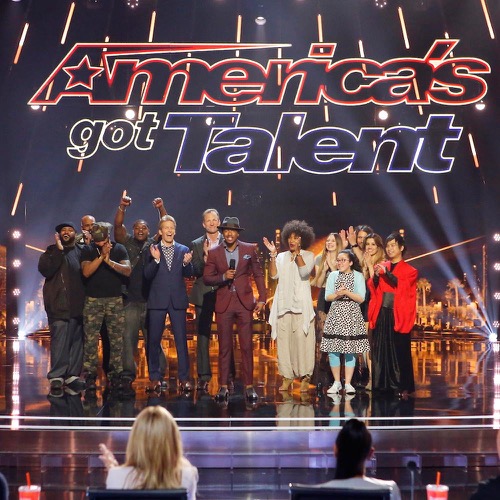 On tonight’s episode per the NBC synopsis “this week Reba McEntire joins Mel B, Simon Cowell, Heidi Klum and Howie Mandel with control of the Golden Buzzer pushing her favorite act through to the Top 36.”

This season of “America’s Got Talent” continues with tonight’s episode “Judge Cuts 2” with special guest judge Reba McEntire. Tonight twenty acts will perform while only seven will continue on to the next round.

Kadie Lynn Roberson starts off tonight’s competition with a soulful rendition of Miranda Lambert’s “Mama’s Broken Heart.” The judge had high praise for her performance with Simon saying he would fight for her personally to make sure she continued to the next round.

Vello Vaher, a 52-year-old contortionist, is the next contestant to try his luck. The judges were impressed by his original performance and unbelievable contortions, culminating in his sliding down a high rope by his teeth.

Hip-hop group Household Louis was up next but failed to impress the judges with their depressing lyrics. Rapper Zach Sherwin also failed to wow the judges with his bizarre song. Skylar Katz, 11, blew the judges away with her original rap and enthusiastic performance.

Dancer Eric Cavanaugh performed during the break. Contortionist Sofie Dossi again wowed the audience and judges with her aerial artistry and her foot-launched flaming arrow, earning her Reba’s Golden Buzzer. Broadway Singer Moya Angela’s powerful vocals brought high praise from the judges, although Simon thought her choice of song was too safe.

Broadway Singer Moya Angela’s powerful vocals brought high praise from the judges, although Simon thought her choice of song was too safe. Danver Parker Garrison and troupe Youngster performed during the break, both receiving accolades from the judges, while Cody Carter wowed with his fire batons. Kadan Rockett’s adorable and highly choreographed magic show also impressed the judges.

Danver Parker Garrison and troupe Youngster performed during the break, both receiving accolades from the judges, while Cody Carter wowed with his fire batons. Kadan Rockett’s adorable and highly choreographed magic show also impressed the judges.

Comedian Adam Grabowski received a red X from Simon during his first joke and was booed by the audience for his infidelity jokes. Crowd favorite transgender comedian Julia Scotti got laughs and praise from the judges for her macabre jokes.

RL Bell, a bodybuilder singer, received crowd appreciation for his rendition of “Let’s Get It On” and high praise from the flustered female judges.

Musical magicians, Cecile and Mighty, gave a cringe-worthy performance that received a red X from Simon. Steven Brundage, Rubik’s Cube magician, floored the judges with his unbelievable set, though Howie felt that he lacked showmanship.

Gary Sladek and Broadway Jim performed next, receiving a red X from Simon and Howie and harsh criticism from all the judges. Knife-throwing act, Deadly Games, had the judges at the edge of their seats with their spinning wheel of death.