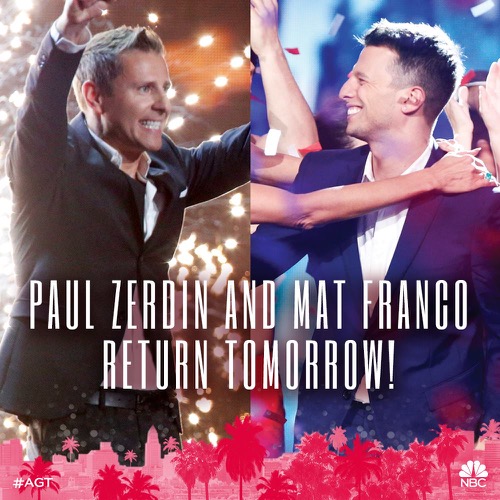 On the last episode, this week international superstar, Louis Tomlinson, joined Mel B, Simon Cowell, Heidi Klum and Howie Mandel with control of the Golden Buzzer pushing his favorite act through to the Top 36. Hosted by Nick Cannon. Did you watch the last episode? If you missed it, we have a full and detailed America’s Got Talent recap America’s Got Talent right here for you.

On tonight’s episode per the NBC synopsis  “twelve compete in the first LIVE show with Golden Buzzer- Laura Bretan, fan favorite comedian-Lori Mae Hernandez, Philadelphia Eagles player/magician- Jon Dorenbos and more, back to win America’s vote for a coveted spot in the Semifinals.”

Tonight’s live shows begin with Golden Buzzer recipient singer Jayna Brown who blew the judges away with her mature and soulful performance.  Up next is illusionist Hara whose stunning graphic effects and imagery impressed the judges.

Dance group Outlawz are the next contestants to compete in the live shows: their Ghostbusters-inspired routine received an X from Simon who felt that the act was clumsy and the other judges agreed that something was off about their performance.

Singing group Musicality, made up of students from a low-income neighborhood, performed next.  The group’s positive message resonated with the judges, although Heidi wished for more solos while Simon suggested better material in the future.  Comedian Lori Mae Hernandez was the next performer to try her luck on stage, whose tween-focused and politically-charged routine made her a judge favorite.

After the break, the competition continues with Deadly Games, a husband, and wife team who perform death-defying stunts.  Their blindfolded knife-throwing routine coupled with a flaming wheel of death caused Simon to call them a “world class act.”  Next up is magician Jon Dorenbos who administered a personality test through secret drawings done by the judges, guessing the correct artist each time.  His act earned him a standing ovation from the judges and audience.  The next performer is singer Daniel Joyner whose Elvis rendition received mixed reviews from the judges.

Fan favorite mime Tape Face performed next, using Heidi and Nick as his assistants.  His bizarre and oddly charming act received praise from all of the judges except for Mel B. who felt disappointed with his routine.  90-year-old dancer and Golden Buzzer recipient Dorothy Williams was up next.  Her swing routine and tassel striptease brought her kudos from the judges.  Dance and visual artists Sila Sveta performed next: Simon hated the performance, Mel B. had mixed reviews, and Howie and Heidi loved it.  The final performer is Golden Buzzer recipient fourteen-year-old opera singer Laura Bretan who again wowed the judges with her exceptional voice.