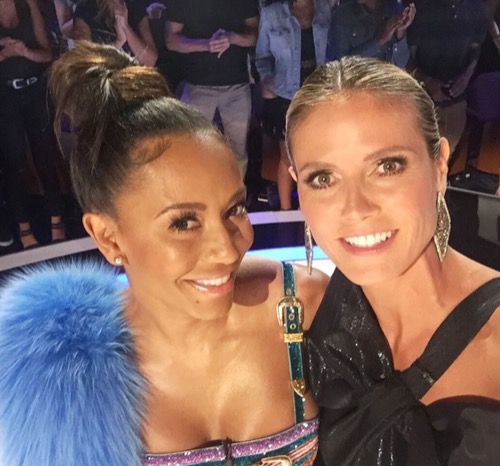 On the last episode, America found out, which acts were going to the semifinals, with judges Mel B, Simon Cowell, Heidi Klum and Howie Mandel. Nick Cannon Hosts. Did you watch the last episode? If you missed it, we have a full and detailed America’s Got Talent recap right here for you.

On tonight’s episode per the NBC synopsis,  “semi-finalists perform for a chance to win $1 million and be named the most talented act in America. Starring celebrity judges Mel B, Simon Cowell, Heidi Klum and Howie Mandel. Hosted by Nick Cannon.”

On tonight’s episode of “America’s Got Talent,” eleven semi-finalists will compete but only five will continue on to the finals for the chance to win their own Las Vegas show and $1 million.

Tonight’s first contestant to compete is big band singer Sal Valentinetti. His rendition of “That’s Life” earned him a standing ovation from most of the judges. Mel B liked the performance but thought that he was holding back a bit. Heidi, Howie and Simon both loved his version of the song and thought it was a perfect choice.

Up next is magician Blake Vogt. Tonight’s act was themed on the superpowers of flight and invisibility. He begins by ripping off a corner of a card, and making it disappear and then reappear inside the card box on the other side of the table. Vogt then goes up on a scissor lift and makes himself disappear and reappear on the upper balcony. Heidi did not like the performance because she preferred the up-close magic he performed earlier. Simon loved the act and said that this performance may have just changed Vogt’s life. Howie felt that it was the best act he had given so far. Mel B was impressed by the magic.

Singing group Edgar is the next act to perform. Simon thought that the group is the most improved of all the acts in the contestant. Mel B felt that the performance was warm and powerful. Howie thought the song was beautiful.

Twelve-year-old comedian Lori Mae Hernandez is next to take the stage, performing a routine that includes jokes about the Olympics, Barbie and the AGT judges. Howie said that she is a star but needs to work on her material. Heidi felt that she improves with every performance. Simon thought that this routine was her best yet. Mel B loved that Lori made fun of all the judges at the end of her act.

The next performers are singing group Musicality who performed “Born This Way” by Lady Gaga. Mel B thought the song sounded like a high school performance. Heidi loved the group’s message. Simon and Howie both thought the song was inspirational.

Deadly Games are the next act to perform. Tonight’s act includes whips, knife throwing and crossbows. Heidi said the act was hot and scary at the same time. Simon felt that their performances have been improving. Howie said it was a thrilling performance. Mel B thought the two slayed.

Fan-favorite Tape Face is next to take the stage. He began his routine by picking an audience member to have a staple gun fight with him. Simon said he has the ability to do something stupid and be interesting at the same time. Howie thought it was an intriguing act.

Tonight’s next act is NFL star and magician Jon Dorenbos. He instructs all the judges to throw footballs at a numbered map and then adds all the numbers together for a total of 167. In a locked chest, there are coins that represent each state that the judges hit with their footballs. Howie thought the trick was amazing. Mel B was speechless. Heidi said it was his best act yet. Simon said it was the most incredible thing he has ever seen on one of the AGT shows.

Dance group Malevo were the next act to perform. The group danced, stomped and drummed their way to a standing ovation. Heidi loved the performance, Mel B said it was off the chain, Simon said the group couldn’t have done more this evening, and Howie said people would remember their performance.

Tonight’s final performer is opera singer Laura Bretan who dedicated her performance to her late grandfather. Simon said it was her best performance of the competition so far, Heidi congratulated her on a stunning performance, Mel B called her vocal ability outstanding, and Howie encouraged America to vote for her.