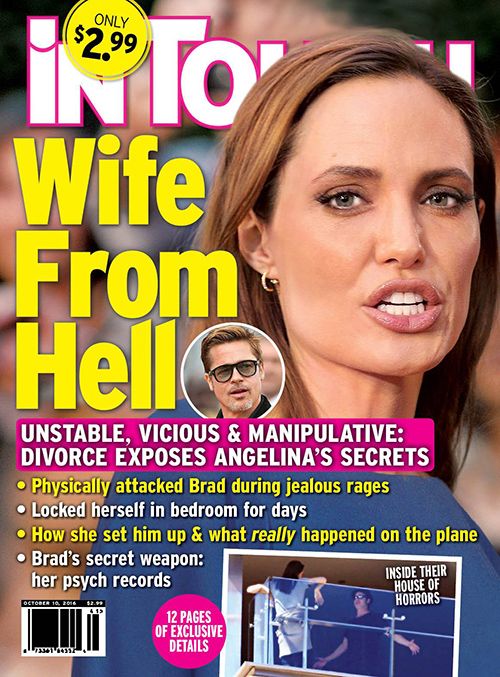 Brad Pitt and Angelina Jolie’s divorce could drag on for years with custody and visitation of the couple’s six children at stake. Sadly, the allegations of child abuse have reportedly forced the children to take sides in this ugly divorce in which $400 million is at stake.

In Touch Weekly exclusively reports that the Department of Child and Family Services paid a visit to Brad on the weekend of September 17. “Brad admitted to being drunk and losing his temper, but that’s it. He even took a urine drug test on the spot.” DCFS conducted an exhaustive interview with Brad. The Oscar-winning actor emphatically stated he has never abused any of the six children.

Brad Pitt reportedly made every effort to get the children under control as the family returned to Los Angeles from France on a private jet. Things got out of hand, Brad and Maddox did get physical, but absolutely no hitting, punching or slapping occurred.

The source went on to say that Brad “was extremely remorseful about the entire situation.” Angelina Jolie is no longer living in the family home and was not present when DCFS arrived to speak with Brad. Angelina, Maddox, Pax, Zahara, Shiloh, Knox and Vivienne are currently residing in a rental home with their mother.

DCFS individually interviewed Angelina and the couple’s four nannies and all six children. The insider revealed that Angelina Jolie said that Brad Pitt has lost his temper many times with the children. In addition, Angelina alleges that Brad drinks and uses drugs.

Though Brad submitted to a drug test, the insider revealed exclusively to In Touch Weekly that Angelina was not asked to take a drug test.

The divorce has divided the children, the source reports. Maddox, 15, and Pax, 12, “seem to think they are tasked with being their mother’s protector.” Zahara, 11, Shiloh, 10, and twins Vivienne and Knox, 8, expressed in their interviews with Department of Child and Family Services that they miss their father.

The fight over custody and visitation in the Angelina Jolie/Brad Pitt divorce might become even more cutthroat if Angelina plans to take the children out of the country.

Previous reports state that Angelina may have accepted a teaching position at the London School of Economics. The actress allegedly has been asked to join the staff as a visiting professor for the school’s masters program, which maintains a focus on women, peace, and security. Stay tuned for more updates, and keep checking CDL for the latest in celebrity news!