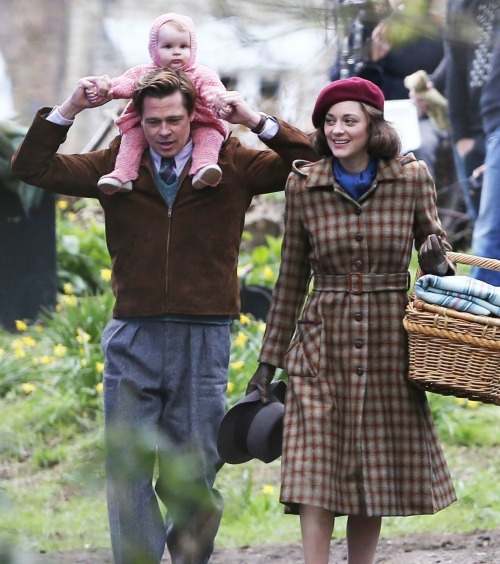 Both Marion Cotillard and her beau Guillaume Canet are still on the offensive as they are calling out all of their ‘haters’ that have accused the French actress of having a cheating affair with Brad Pitt. In fact, Guillaume Canet has finally come out in Marion’s defense, hitting out at the media for fueling the rumors of Marion and Brad’s relationship before Angelina Jolie’s divorce announcement even made headlines.

Marion’s name was dragged into Brad and Angelina’s messy divorce drama simply because there was speculation that she might have gotten a little too up close and personal with the married actor while they were filming their upcoming World War II film, ‘Allied’ in London earlier this year. In fact, Page Six even reported that Angelia Jolie hired a private detective to find out what exactly was going on between Marion and Brad behind the scenes.

And now Guillaume, who shares a 5-year-old son with the French actress, is hitting back hard by calling out the ‘venal stupidity’ of the allegations. He wrote on his Instagram account, “I do not usually comment on rumors about us … I do not usually talk about my private life, which until now I have always carefully protected … But the fury of the tabloids, the venal stupidity of some people calling themselves journalists, the hatred of some users feeling stronger behind a keyboard, push me to speak of the pride, the love, respect and admiration I have for Marion, for staying so strong and intelligent in the face all these stupid and unfounded accusations.”

Of course, with Marion and Guillaume bringing even more attention to the cheating scandal, it won’t help the fact that both the actress and Brad Pitt will be forced to promote their film in the coming weeks together. The tabloid media will no doubt analyze every move Marion and Brad make as they are forced to talk about their film while as much distance between them as possible.

After all, that’s exactly what Brad Pitt and Angelina Jolie were forced to do while they were promoting ‘Mr. & Mrs. Smith’ together back in 2005 after news broke that he might have been cheating on his wife Jennifer Aniston while filming with his co-star. Jennifer ended up filing for divorce only a few short months after the cheating allegations hit the headlines.

As far as Marion Cotillard and Guillaume Canet, the couple are doing themselves no favors with their attacks on the media as it will no doubt end up bring them even more unwanted attention, especially when the truth about Marion and Brad Pitt’s relationship eventually comes out. Do you agree, CDL readers?

If only all celebrity statements read like an open-love letter. So French. #MarionCotillard a masterclass in graceful denials #Brangelina pic.twitter.com/RlKWWWNwUy