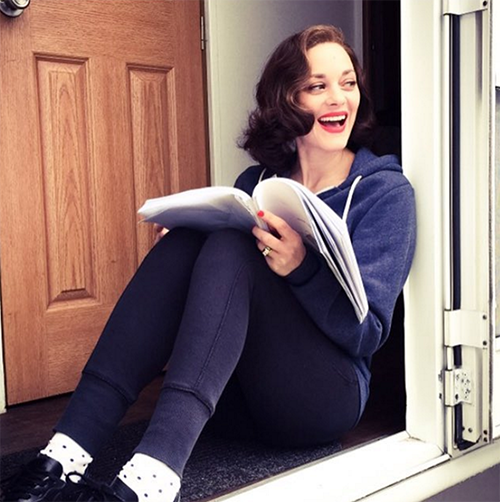 Angelina Jolie and Brad Pitt’s divorce announcement has shocked the celebrity world, and now there’s new speculation that the actress is pulling the plug on their marriage because of a third party. Reports are swirling that Brad Pitt allegedly cheated on his wife with his co-star Marion Cotillard in a heated extra marital affair.

There have been a number of reports indicating that Brad Pitt and Marion Cotillard might have gotten a little too up close and comfortable while they were filming their World War II movie, “Allied,” in London together. And it looks like Angelina was well aware of her husband’s behavior, as she supposedly hired a private eye to watch his every move in London before reporting back to her.

According to Page Six, Angelina Jolie apparently knew that Brad and Marion were getting more than just cozy while they were filming their movie together. One source told the site, “She hired a private eye because she felt that he was fooling around with her on the set, and it turns out, he was. And that was the final straw. The PI discovered that Pitt was cheating on his wife of two years with Cotillard — while also partying like a single guy on a mission. The atmosphere [off-set] was full of hard drugs and Russian hookers, and Angie was told Brad got caught up in it. He’s in the throes of some insane midlife crisis, and Angie is fed up.”

Of course, it’s easy to say that Brad is the one who destroyed his marriage and family by cheating on Angelina. But then again, with the pressure of raising six children together, along with all of Angelina’s strict rules and demands, it’s no wonder that Brad wanted to escape with each chance he got. Surely, the cheating allegations won’t bode very well for Marion Cotillard either, as the actress is also married. She’s married to French actor Guillaume Canet and has a child of her own.

For Angelina though, she knows that the Brad and Marion’s cheating scandal is going to wreak havoc on her own image, especially considering that she and Brad started their own relationship under similar circumstances well over ten years ago, too. It’s been long alleged that Brad Pitt and Jennifer Aniston’s divorce was fueled by the actor’s affair with Angelina at the time. That’s why the mother-of-six wants the public to think that Brad’s substance and alcohol abuse along with his “anger issues” at home has always been the problem, and not his romance with Marion. Clearly, Angelina Jolie didn’t realize that karma would one day catch up with her, too. Do you agree, CDL readers?