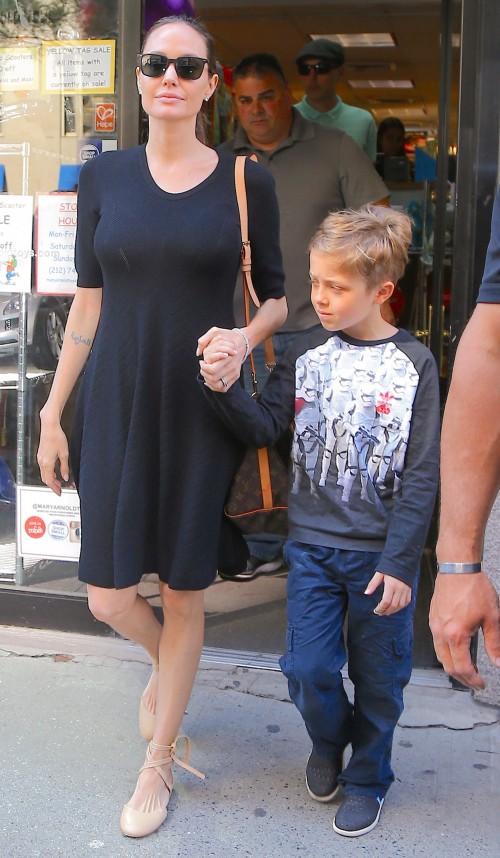 Angelina Jolie’s marriage to Brad Pitt may have hit a rough patch when the Oscar-winning actress was neglecting her health and resorting to rumored starvation tactics but on a recent outing with son Knox Jolie-Pitt, the actress looked healthier and more radiant than she had in months.

Is Angelina piling on the pounds to save her marriage? Angelina Jolie flew into New York City this weekend with her brother James Haven (the one she famously lip-smooched at the Oscars) and her sons Knox Jolie-Pitt and Maddox Jolie-Pitt.

Angelina then took youngest son Knox out on a toy shopping trip in NYC and the two hit up the LEGO store and another shop while out together without her brother and older son. So where was Brad Pitt? He was waving the starting flag at Le Mans in France.

Angelina Jolie-Pitt was glowing and smiling and her face looks like she’s put on a few pounds. Although her body was shrouded in a black dress – her color of choice – she didn’t seem as skeletal as she has in recent months.

In fact, the beautiful actress-director-humanitarian was downright radiant. She waved to fans and paparazzi that had gathered in droves outside the New York City LEGO store. Knox Jolie-Pitt, aka Brad Pitt’s mini-me, wasn’t smiling much, but it was a large crowd so it might have been off-putting for the seven-year-old.

While Angelina was in her usual funereal black, son Knox wore a Star Wars shirt, jeans and comfortable kicks. The duo also had one of their burly bodyguards on hand to keep them safe as they were surrounded by paps and fans.

When Angelina Jolie-Pitt was directing Unbroken, her World War II flick about Louis Zamperini’s interment in a Japanese POW camp, the talk around set was that she starved herself along with the actors who had to drop the LBs to make the war movie.

They also had to participate in rigorous “stunts” that portrayed extreme punishments that the cruel Japanese camp commandant forced on the American POWs. Insiders on the movie set revealed that Angelina performed the harsh stunt work beside her actors.

After filming completed, Angelina Jolie-Pitt remained gaunt for far longer than recovering from the ordeal should have taken. However, as a devotee of humanitarian causes who frequently visits victims of oppression, poverty and disasters, she might feel staying ultra-thin is appropriate.

Reportedly Brad Pitt was so concerned about his wife’s weight that he told her to get back up to a healthy weight or they were done. If Angelina was staying slender because of her empathy with the UN victims she works with, that’s nice enough.

But since Angelina has three daughters – Zahara Jolie-Pitt, Shiloh Jolie-Pitt and Vivienne Jolie-Pitt – starving herself into a skeletal state cannot be healthy for those girls to observe. Could Angelina’s extreme weight loss affect her daughters’ self-esteem?

The good news is, Angelina looked healthy on this recent outing with her youngest son and while she’s still a slender woman, she’s not deathly thin as she was before. What do you think?