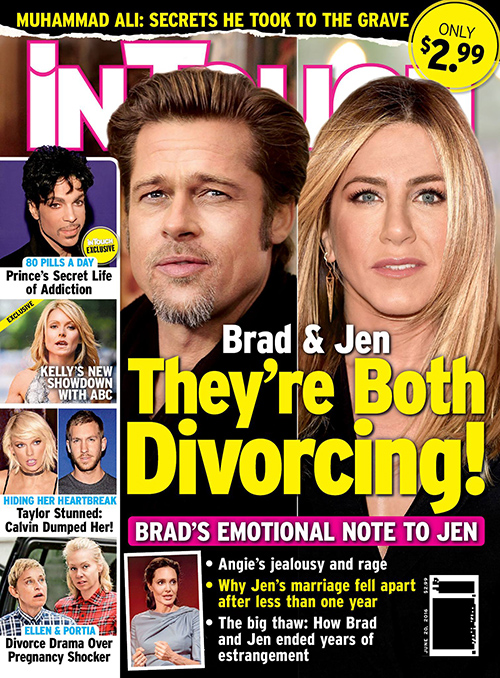 2016 seems to be the year of the divorces in Hollywood. Are Angelina Jolie and Brad Pitt or Jennifer Aniston and Justin Theroux next? This week’s cover of In Touch Magazine teases that both Hollywood marriages are on the verge of divorces, and soon the infamous exes Brad Pitt and Jennifer Aniston will both be single again … at the same time!

This week’s cover of In Touch Magazine features a photo of formerly married couple Jennifer Aniston and Brad Pitt. The headline reads, “Brad & Jen, They’re Both Divorcing!” The front page goes on to tease that Brad “wrote an emotional note to Jen.” And, inside details on why Jennifer Aniston’s marriage to Justin Theroux fell apart after just one year.

According to In Touch’s inside sources, Brad and Angelina are all but over. The tipster dishes, “Brad and Angelina are completely in divorce mode and at a point where they barely speak to each other unless it’s about the kids.” Another source revealed that Justin Theroux and Jennifer Aniston’s marriage is not salvageable either, and the newlyweds go weeks without even seeing each other.

In Touch Magazine goes on to say, “There are a lot of hopeless romantics who would love nothing more than to see Brad and Jen back together. It would really be the perfect Hollywood ending.” It’s no secret that Brad and Angelina and Justin and Jennifer’s respective marriages are far from perfect, but the odds of both couple divorcing at the SAME time are slim.

If by some miraculous turn of events, Jennifer Aniston and Brad Pitt both wind up single again at the same time, that doesn’t mean that they are getting back together. Jennifer Aniston may be America’s Sweetheart and all, but even Jen is not THAT forgiving. Let’s not forget, she definitely got the raw end of the Brad and Angelina love story.