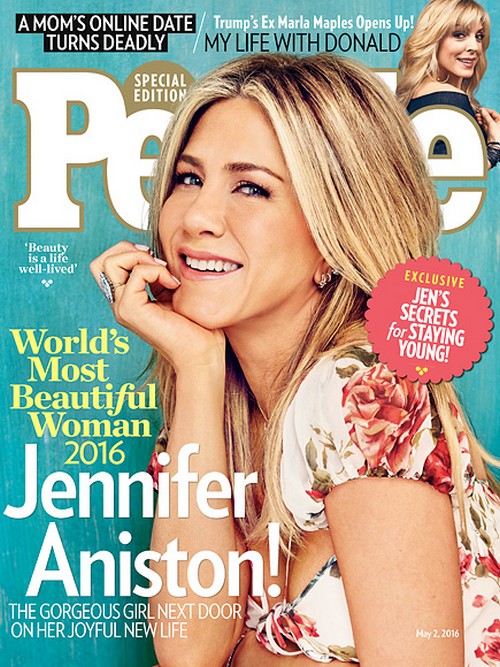 Is Jennifer Aniston sending the world a message about her baby making abilities with her Mother’s Day People magazine cover as the World’s Most Beautiful 2016 woman? Or is this just a coincidental plug for her new movie Mother’s Day? Could Aniston finally be getting into mom mode?

Jennifer Aniston has raged before when asked when she would have kids and said the pressure was “unfair” but early last year revealed that having a child with Justin Theroux was “a want” that they were working on. At 47, though, it seems less and less likely she could carry a child of her own.

However, there have been adoption rumors swirling since she and Theroux tied the knot in August 2015 but then that talk seemed to subside with the revelation that Theroux had been chatting up his ex Heidi Bivens in recent months.

But if Jennifer Aniston and Justin Theroux put that drama behind them, did the adoption go through? Aniston was reportedly having a nursey built in their home for the adoption of twins. Did that happen and can we expect an announcement of her new mom status as her movie opens?

It seems terribly ironic for the mother of NONE to have a magazine cover hit on Mother’s Day along with a new movie titled Mother’s Day all in a perfect publicity storm without reason. Jennifer Aniston had to know that those two events would draw media scrutiny of her childless status.

Since Aniston has snapped before over questions about her childlessness, would she invite all the questions bound to crop up with these two events unless she could twist it to her advantage? Is an adoption or pregnancy announcement imminent?

For those that don’t know, the Most Beautiful Woman crowning is not a surprise to the recipient at all. People magazine considers several candidates and then there’s a negotiation for access. Typically, the celeb that will open up most to the magazine gets the title.

It’s likely that Aniston worked with the magazine to accept the cover and title to promote her new Garry Marshall movie Mother’s Day in which she stars with Jason Sudekis (himself a new dad with partner Olivia Wilde) but there may be more to it.

Why would Jennifer Aniston open the Pandora’s Box of pregnancy and baby questions unless she had an answer at long last? Her pal Sandra Bullock used People magazine to break the news of her secret adoption of baby Louis back in 2010, so she could have coached Aniston.

And as People’s 2015 Most Beautiful Woman, Sandra Bullock was in a prime position to advise Jennifer Aniston on how to work with People for a similar adoption reveal. No doubt People would love to get the scoop on an Aniston pregnancy or adoption and would have gone all out to meet her demands.

Even if the Most Beautiful Woman issue doesn’t reveal the adoption or a bun in the Aniston oven, that exclusive could come in a later issue as part of a package deal. What do you think? Has Aniston finally adopted? Or is she revealing a pregnancy soon?

Is the multiple Mother’s Day messaging a sign to Jen Aniston fans that a kid is finally on the way? Share your comments and come back to CDL often for more celebrity news and more!