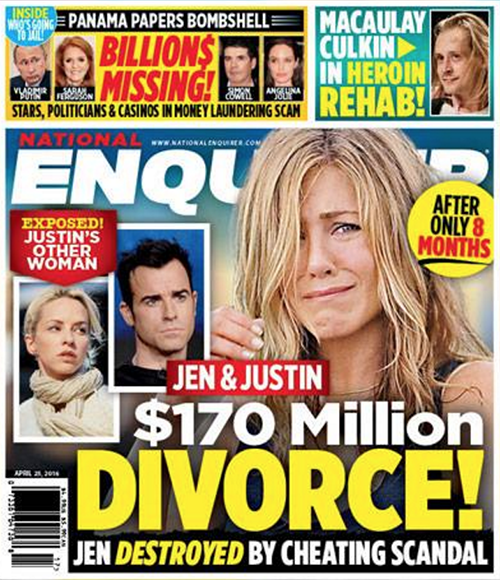 Well, that was fast! It looks like there is trouble in paradise for Jennifer Aniston and her husband Justin Theroux – and their marriage is going to be shorter than their engagement was! Jen and Justin were engaged for nearly five years before they FINALLY tied the knot in a small and super secret wedding 8 months ago. Less than a year into their marriage, the couple is reportedly on the verge of a divorce.

This week’s cover of National Enquirer features a photo of a distraught Jennifer Aniston. The headline reads, “Jen & Justin $170 Million Divorce: Jen Destroyed By Cheating Scandal.” The cover also features a photo of a blonde woman and teases that she is Jen’s hubby Justin Theroux’s mistress. She isn’t just a random hook-up though, according to the tabloid’s sources – the woman has been in Justin’s life for over 14 years.

An inside source dished to National Enquirer that Jennifer Aniston caught Justin making secret phone calls to the woman, a Hollywood costume designer named Heidi Bivens. The insider went on to reveal, “Jen feels destroyed by Justin. This is the ultimate betrayal for her and her absolutely worst nightmare. The situation between Jen and Justin is nuclear right now. Jen feels like she threw her all into her marriage, and now she’s been blindsided by Justin’s callous behavior.”

Any couple that takes nearly half a decade to set a wedding date, has some obvious problems to begin with. This isn’t the first time that tabloids have reported that Justin Theroux is unfaithful, and it probably won’t be the last. The problem is, Aniston’s love life has been the butt of jokes for years, and the actress would be mortified if this marriage turned out to be anything like her first.

What do you guys think? Do you believe Justin is cheating on Jennifer? Will she actually risk the embarrassment of another messy divorce and cheating scandal? Let us know what you think in the comments below!