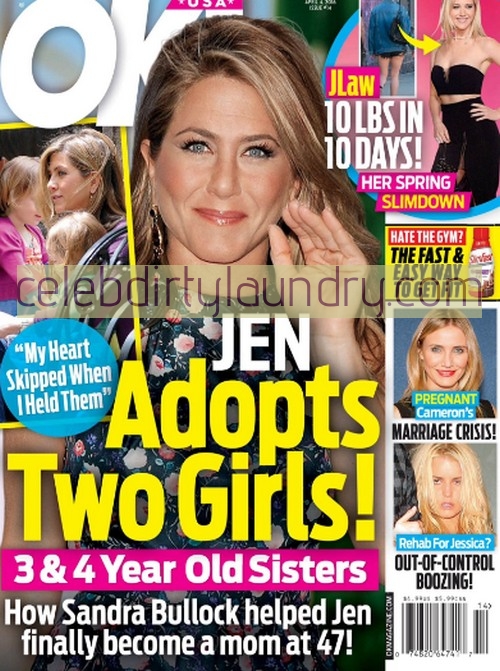 According to a report Jennifer Aniston made a secret adoption of two girls from the Midwest. According to the OK! cover article this week it’s the way Jennifer can save her marriage to Justin Theroux after months of failed in vitro fertilization treatments.

Despite rumors that Jennifer and Justin live completely separate lives, rarely see each other and do not even see each other, the couple is desperate to have a family. Will the little girls bring the couple closer together?

Jennifer and Justin are allegedly delighted that the paperwork has gone through to approve this adoption. Jennifer Aniston and Justin Theroux will soon have two girls running around, a three-year-old and a four-year-old.

Everything is very hush-hush right now, of course. An “insider” revealed that Sandra Bullock advised Justin and Jennifer to keep the adoption a secret until the girls are safely home and settled in. The biggest concern is for the children’s privacy.

Sandra told Jennifer that there is also a slight chance the girls will not bond with the couple.

If Jennifer Aniston and Justin Theroux are adopting how long will the couple wait before they let the world know they’ve expanded their family with the two Midwestern sisters? Reportedly Jennifer would like to tell everyone ASAP but understands the importance of keeping everything a secret.

The “insider” says the adoption is a done deal – all the paperwork has been approved. The source divulged that Jennifer cried tears of joy and relief when she and Justin received the news. “Jennifer and Justin are definitely going to have their hands full, but they couldn’t be happier,” the insider stated.

It will be a dream come true for Jennifer according to OK! who claim that she has wanted to be a mom since she married Brad Pitt. In fact, Jen refused to bear children for Brad and that is considered one of the prime motivators in the dissolution of their marriage.

Jennifer was blindsided when Brad left her for Angelina Jolie. Of course she rode this break-up incessantly for years as it was her primary claim to fame.

Waiting for the adoption to be completed must be very difficult for Jennifer Aniston and Justin Theroux. But while the couple supposedly waits for the final paperwork they can work on making their palatial home a children’s playground.

Do you think Jennifer Aniston is adopting two kids? By now she’d have dozens of children if even a fraction of the pregnancy and adoption tabloid stories throughout the years were correct.