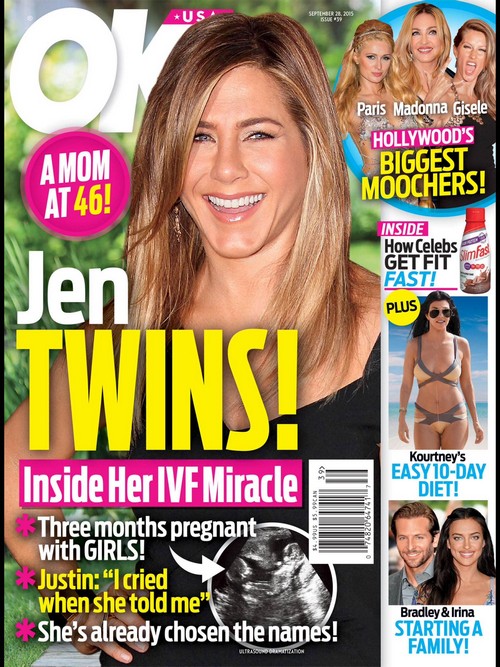 Jennifer Anniston is “pregnant with twins” every few months in the tabloids, and it has been that way for the past three years – we aren’t buying it. According to OK! Magazine’s alleged inside sources, Jennifer found out that she was pregnant with twins right before she and Justin’s secret wedding ceremony. The actress texted Theroux a picture of the sonogram and joked that they are going to have “double trouble.” The tabloid goes on to say that Jen is going to be a “hands on mom,” and she has already decided to name her twin baby girls Lila and Ava.

Jennifer Anniston has been fake pregnant so many times in the tabloids, we aren’t going to believe it until we see a baby bump – a REAL baby bump, not a bloated belly after she leaves an Italian restaurant and just ate her weight in pasta. Besides, weren’t Jen and Justin adopting a six month old baby girl after they got married? Life & Style Magazine pushed that story for weeks – and now the adopted baby is suddenly gone and she is pregnant with twins? Yeah, we’re not falling for it. Besides, OK! Magazine was reporting Jennifer Anniston is pregnant since January 2015 – shouldn’t that baby be here by now? Longest pregnancy ever …

What do you guys think? Is Jennifer Anniston pregnant with twins, or is this just another bogus tabloid report? Share your thoughts and theories in the comment section below!